A question I often get asked is whether you need a TV licence to watch BBC programmes over the internet.

At the moment, the legal position is that you don't need a licence to watch TV purely on-demand, but you do if you are watching TV live (through any receiving device in the home).

So a live simulcast over the web from the BBC - of, say, the Beijing Olympics - will require a TV licence, but watching an on-demand (non-live) stream or download through the BBC iPlayer will not.

The Help section for the iPlayer confirms the position under "Will I need a TV licence to watch programmes on BBC iPlayer?" It states that:

You do not need a television licence to watch television programmes on the current version of the BBC iPlayer. You will need to be covered by a TV licence if and when the BBC provides a feature that enables you to watch 'live' TV programmes on any later version of the BBC iPlayer which has this option... A 'live' TV programme is a programme which is watched or recorded at the same time (or virtually the same time) as it is being broadcast... [etc]

This raises the next question: "so is the iPlayer undermining the licence fee?". 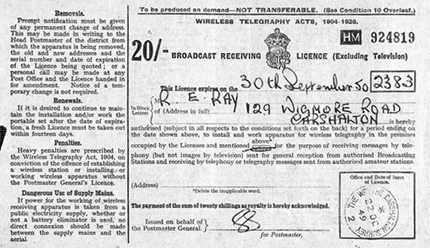 Well, the number of homes that currently have no television licence, but that do have broadband subscription is currently estimated to be infinitesimally small. The chances are if you want to watch BBC TV programmes via catch-up over the web, you are also watching some BBC programmes at other times, live or time-shifted, via a TV set, and will already have a TV licence.

If we saw, over time, that some people stopped receiving live broadcasts at all, stopped paying their licence fee, but continued to consume televison programmes, solely on-demand through the iPlayer (or other players), then we might have to consider talking to the Government about Part 4 of the Communications Act 2003 and the Communications (Television Licensing) Regulations 2004, so that they can then consider whether on-demand tv viewing might be brought within its aegis.

So it's an interesting point, but it's not causing our finance director sleepless nights.