Although I was Senior Development Producer for the BBC's homepage at the time, I wasn't actually in the office to help with coverage of the July 7th bombings. By the time I'd started travelling that day, television was already reporting "power surges" on the London Underground.

The BBC, of course, has a whole raft of plans and procedures for national emergencies. There was already an established process of handing control of the main picture promotional area of the homepage directly over to BBC News in the event of a major story breaking. However, that didn't seem to go far enough that day.

It also soon became clear that the BBC's servers were straining under the sheer number of people wanting to get the latest information about the terrorist attacks. The team began reducing the content on the page in order to minimise the download footprint for each page view.

By the afternoon, the page being served was an experimental XHTML/CSS table-free version that had previously only been used as a 'proof of concept'. It worked in most legacy browsers - although I do recall that the BBC got emails of complaint from some users of Internet Explorer on the Mac OS. BBC News had a further contingency plan in place - by 11am that morning the BBC News site was being served via Akamai, rather than from the BBC's own server farm.

Stuck at home, whilst trying to get on with some other work, I kept taking screen-grabs of the BBC homepage each time it updated, and was uploading them to Flickr to keep a record of the changes throughout the day. 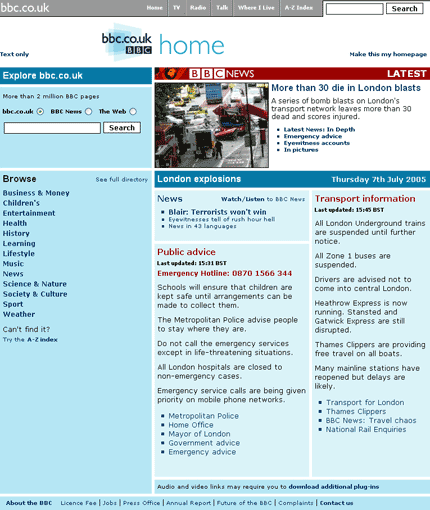 In the middle of it, someone messaged me via Flickr, asking that I stop doing it. It was, apparently, really annoying them and wasting their time, because when they were looking for pictures of the bombings, my screengrabs kept coming up instead of pictures of the actual carnage, which is what they wanted. You do meet some funny people on the internet.

I also recall that during the rush to keep the information updated and the page running, a phone call was taken from a distant BBC policy department, pointing out that the homepage was erroneously referring to the recently re-branded "Action Network" service under the old name "iCan". I understand it was somewhat forcefully explained that this wasn't perhaps the most pressing issue at the time!

The flexible use of the BBC homepage was in contrast to how the page reacted on September 11th 2001. The template wasn't anywhere near as malleable then, and so all that could be done was to edit the three promotional slots on the page to carry news of the unfolding events. 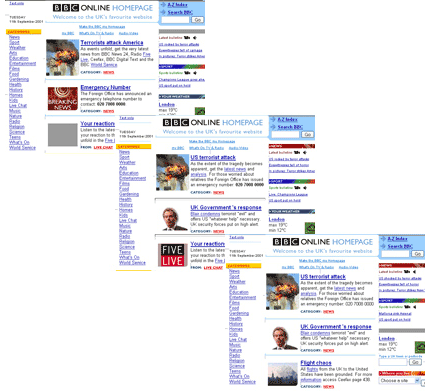 In order to get the information published faster, the team bypassed the CMS, and were simply using FTP to put some small HTML includes live. In fact, until the directories were cleaned up and reorganised in 2005, if you knew the right address, you could still find the HTML snippets with the last news updates from that day on them.

After the July 7th bombings, Doug Graham, who was part of my team, was instrumental in making sure that the BBC published some figures about the sheer volume of data and streaming that had been served that day. The headlines: 40,000 page requests per second on the News site, and BBC bandwidth usage reached 11.1Gb/sec, with an extra 3Gb/sec going to Akamai.

At that time, the BBC didn't have any kind of "blog" outlet like here or over at the BBC News Editors blog. Since it wasn't press release material, the numbers were hastily published in the feedback area of the site.

Incidentally, the little bump you can see on the graph from the day before was the surge of traffic rushing to find out whether London had been awarded the 2012 Olympics, which had set a much happier, but short-lived, bandwidth consumption record just the day before.