The freshly redesigned BBC homepage comes complete with a swishy new interface that allows users to customise the way the page appears to them. It isn't the first time the BBC has dabbled with personalising homepages.

For some time now, users have been offered personalised weather on the BBC homepage, and BBC News has had a small panel for UK users allowing them to get their local stories straight away by entering their postcode.

The BBC homepage also used to have "targeted" promotions in the early 2000s. As users visited places around the BBC, a cookie would pick up where they went, and identify them as one of four types of the BBC's web audience. When they visited the homepage, they would see a promotion appropriate to their audience type - i.e. whether they were a soaps/entertainment type, or a Radio 4/factual type.

The biggest attempt at personalisation on the BBC site, though, was a service launched in 2000, called myBBC. In some ways, it was rather ahead of its time.

It allowed users to choose which panels of content appeared, from options like news and the weather, to picking your favourite football team, or adding a list of bookmarked recipes to your homepage. Users had to register to customise the page, and were also able to choose the colour scheme. 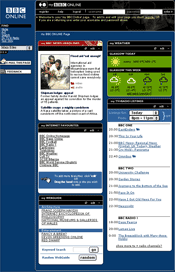 Of course, compared to modern Web 2.0 services like iGoogle, Netvibes or Pageflakes, it was rather clunky and primitive. There was no AJAX involved; it was all delivered using a Perl back-end and the BBC's Central User Database. It used CSS to do the colouring, which was against the BBC's HTML guidelines at the time (and would still be for a couple of years), as it was not supported across all of the BBC's target browsers.

One of the issues faced by the BBC developers was getting information out of the mostly static HTML sites that were being produced at the time, and into these custom myBBC panels.

Nowadays, the BBC produces hundreds - thousands probably - of RSS feeds, which would be ideal for the job. However, when myBBC was being developed, RSS 0.91 was not yet a year old, and Atom wasn't even a twinkle in Sam Ruby's eye.

That meant that each syndication panel format ended up being pretty much custom built for each area of the page.

Another element of the myBBC service was the way in which it worked across different platforms. The idea was that once you were logged in, you would get the same selection of content whether you were viewing myBBC on your computer, your PDA, or using the little lamented Web-on-TV format.

Despite the cross-platform features, in some ways it was more Web 0.2 than Web 2.0, but myBBC won awards at the time. It was one of the links in the BBC Online global navigation, appearing in the left-hand links column on every page on the site.

It was quietly closed down in 2003. It didn't have a massive user base, although those who did use it were fiercely loyal to it and had grown accustomed to it as their homepage. It seemed that in some ways that level of personalisation was a challenge for the BBC's very mainstream online audience. It will be interesting to see how the new drag 'n' drop BBC homepage interface fares with that same audience nearly five years later.