A lick of paint for the BBC homepage

...at least, that was the job spec I was given on my second day as Acting Head of User Experience at the BBC.

I joined the Beeb after moving to the UK with my wife just over a year ago. I needed a fresh challenge and was excited to be part of a truly world-renowned media company with a public service remit which makes it 100% user-focussed. For me, the BBC is one of the last great important places.

So when the BBC's Internet Controller Tony Ageh suggested - or, should I say, vehemently recommended - that we give the BBC homepage a "lick of paint", it seemed the ideal way to get my head around the BBC and its immense universe of content and services.

We drew inspiration for the new page from a variety of sources.

It was a no-brainer to move to a layout that would be cleaner, more open and more easily readable. There was also a desire to get away from the tired and monotonous blue base colour of the original page.

From a conceptual point of view, the widgetization adopted by Facebook, iGoogle and netvibes weighed strongly on our initial thinking. We wanted to build the foundation and DNA of the new site in line with the ongoing trend and evolution of the Internet towards dynamically generated and syndicable content through technologies like RSS, atom and xml. This trend essentially abstracts the content from its presentation and distribution, atomizing content into a feed-based universe. Browsers, devices, etc therefore become lenses through which this content can be collected, tailored and consumed by the audience.

This concept formed one of the most important underlying design and strategic elements of the new homepage. The approach has the added benefit of making content more accessible, usable, and more efficient to modify for consumption across a wider array of networks and devices. 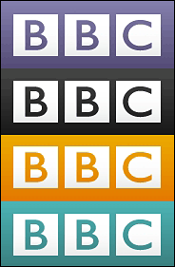 As time went on, our aspirations grew and we realized that many of our goals for a "new page composition layer" required technology and infrastructure which would be new to the BBC (examples including PHP and AJAX). Following detailed dialogue with developers Nick Holmes and Fraser Pearce, we realized it would be possible to deliver many adaptations using our existing services and then add features and functionality as new BBC infrastructure is rolled out.

Keep an eye out for incremental improvements as the homepage continues to evolve.

The key features of the homepage are:

This version is called a "lick of paint" because it hasn't massively changed the content of the homepage. But it reflects, I hope, how the BBC is changing: it helps to empower the user to find, play and share more of what they want, when they want.

By adopting a collaborative and flexible approach it has taken less than three months for the new homepage to come to fruition. The response to our internal beta testing has been overwhelmingly positive.

The redesign is part of an ongoing conversation with our audience. Forthcoming services and the new page composition layer will deliver further visual refinement and personalization.

For now, all this customization is saved in a cookie, but from January we hope - with the launch of Identity - to incorporate this data into your unique personal user profile. The New Year will bring more treats including video on the homepage and an iPlayer widget. In short: watch this space.

While the site is currently in beta, I hope you'll opt in and click over to check out the new homepage, spend some time on it, personalize your experience, and take a moment to leave a comment here or to click the feedback box in the upper right of the homepage.

This page is the beginning of a conversation between the BBC and you about the page; I hope that you'll join us, as all conversations are better with an honest open dialogue.

The BBC Homepage Team - a special thanks: