I am a newcomer to the BBC's Future Media Division, and consider myself to be well "behind the curve" on all things webby and technological compared to the clever people who work here. 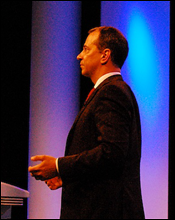 So I was flattered to be invited to the meeting last week between the BBC's Tony Ageh (Controller, Internet) and Mark Taylor of the Open Source Consortium [pictured, right]. The meeting's aim was to have a discussion about the BBC's iPlayer.

Mark's already been interviewed about the meeting elsewhere and there's been a statement from the Open Source Consortium and some comment on blogs.

Last Friday the estimable Backstage team recorded a discussion with Mark Taylor, Becky Hogge from the Open Rights Group and Robin Doran, Matthew Browning, Jonathan Tweed and Ben Smith (all BBC Staff connected to the development of the iPlayer).

This is now available to listen to as a podcast here.

If you have any thoughts on the podcast, please do comment.

For me, what was good about the original meeting was its grown-up tone. Some of the more extreme views expressed about the iPlayer seem to be based for example on the belief that rights don't exist or are irrelevant and that rights holders aren't important. So it was good to hear Mark saying that the OSC accepts that rights holders do have legitmate interests that need to be considered.

Tony outlined the iPlayer story to date. I don't want to give away any secrets from a private meeting. But Tony acknowledged that we haven't done ourselves any favours in the way we've explained our decisions about the iPlayer.

The outcome of the meeting was that George Wright, who leads a new development team within FM&T, is going to have more discussions with free and open source software people (some suggested by Mark and the OSC) to see if there are ways we can work together.

I'm hoping to get George to talk about these on the BBC Internet Blog.