A Tale of Two Conferences

I recently attended two Media/Convergence Conferences talking about the changes coming down the line. They could not have been more different.

The Monaco media conference wheeled out the traditional media's heavy hitters: James Murdoch, Barry Diller, Maurice Levy (the CEO of Publicis), and some really interesting new media rising stars. (Amongst many, my favourites included KickApps, and Hillcrestlabs who demonstrated a highly impressive TV UI capable of intuitively navigating through vast amounts of video in a way that makes the old Sky-like EPG grid look like it's from another century - which, of course, it is).

Talking of Sky, I apparently had an angry exchange with James Murdoch at the Forum.

The FT's Andrew Edgecliff-Johnson told me it was worth the price of the flight. All that actually happened was that, from the floor, I corrected James' assertion that the BBC was a "State Broadcaster" and pointed out that our editorial independence was perhaps one of the reasons why our audience valued us. This drove him to exclaim that the BBC is a "state agency with police powers to collect a tax." At least you know where you are with the Murdochs!

The agenda at Monaco dealt with the well-worn issues of convergence, and whether the new players complemented or competed with established media. 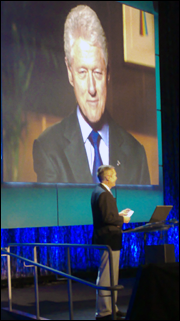 Much more thought-provoking was last month's Google Zeitgeist. This US conference, by comparison, dealt with what the conference organisers believed was the biggest issue our industry faces: climate change and corporate social responsibility more generally. It wheeled out even bigger guns, Bill Clinton, Al Gore (literally minutes before jetting off to pick up his Nobel prize), and Britain's very own David Cameron. There are some YouTube videos from the conference here.

Putting to one side the arguments about the BBC's impartiality in the climate change debate, what is the BBC and the technology/media/telecommunication industries' role to reduce both our and our audiences' consumption of energy?

I have no policy to propose on this subject, just a strong feeling that there is more of a debate to be had. Here are some thoughts:

This issue can only become more important. Our responsibility to save energy inside the BBC is obvious: but what is our role with respect to our audiences? How far does "Inform & Educate" take us with energy issues?

PS: Finally, a nice counter to James Murdoch's views about the BBC came from Five's CEO Jane Lighting, who, interviewed at the Plymouth Media Partnership event - which was jointly organised by the Royal Television Society - highlighted the BBC's iPlayer as one area where the corporation was a pathfinder for the commercial TV sector.

"Thank God they [the BBC] have made that investment in what is a risky area", she added.