Life in the Animal World: a revolution in wildlife TV 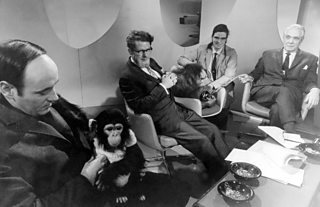 On 14 November 1965 at 21.10, the first episode of Life in The Animal World aired on BBC2, beginning a revolution in wildlife television. The inaugural episode of this new fortnightly programme, whose title quickly got shortened to Life, looked at dogs and cats – a topic likely to appeal to British audiences, a nation of pet keepers. The line-up included such international figures from the community of ethologists as John Paul Scott of the Jackson Laboratory in Maine, and Rudolf Schenkel of the University of Basel. The guests presented their research on the origins of domestic dogs and cats, and their influences on human life. This new series embodied wildlife television’s transition in the 1960s from an interest in the amateur pursuit of natural history to a focus on the professional science of zoology. It also created the conditions for the development, a dozen years later, of such monuments of wildlife television as Life on Earth (1979).

The role of David Attenborough

The programme had been willed into existence by David Attenborough, following his appointment as Controller of BBC2, as an important step in his endeavour to transform the presentation of wildlife on British television. When he took up the position in March 1965, Attenborough noted that there was no natural history programme on the new channel. But rather than importing established formulas from BBC1, such as Look, he took this opportunity to develop a new approach to wildlife television, moving away from ‘simply…showing the beauties of nature. Instead, as he explained to Solly Zuckerman, Secretary of the Zoological Society of London, Attenborough wanted to build ‘on the widespread public appreciation of natural history’, to invite audiences to examine ‘in a serious and critical way new trends and ideas in zoology’. 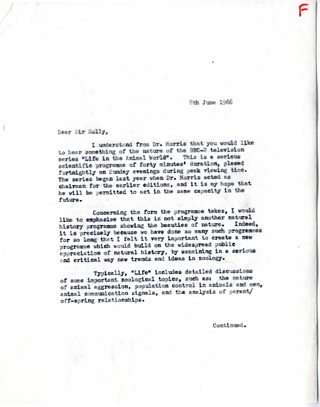 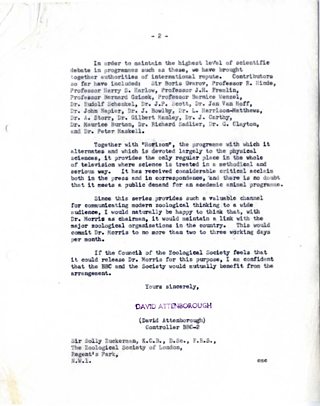 To Attenborough at the time, ‘the most exciting new line of thought in the natural history world [was] the scientific examination of animal behaviour’. When planning the new series, he was anxious that it would be markedly different from previous BBC flagship wildlife programme Look (1955-1968). Instead of presenting films of amateur naturalists, Life was to revolve around interviews with life scientists presenting their findings and ideas. To host the series, Attenborough chose his old rival-turned friend, Dr. Desmond Morris, whom he considered in 1965 ‘by far the most experienced television practitioner in this field and the least used on BBC’. The Curator of Mammals at the London Zoo, Desmond Morris had first been hired there (just after completing a doctorate in Oxford under ethologist Niko Tinbergen) to be the head of the Film and Television Unit which Granada TV operated on the Zoo’s premises from 1955 to 1962. In this role, he had presented Zoo Time, one of the most successful television programmes about animals in the second half of the 1950s. By the time we reach 1965, Morris embodied that rare combination of a practicing scientist and a seasoned broadcaster.

The growth of NHU expertise

The Life series heralds the rise in prominence within the BBC Natural History Unit (NHU) of a new breed of professional wildlife broadcasters; experts at filmmaking who could develop close working relationships with scientists to make creative contributions to science in the film medium. To assist the series producer Ronald Webster, the NHU hired three young assistant producers, Richard Brock (b. 1938), John Sparks (b.1939) and Barry Paine (1937-2011). Through their work on Life, Brock, Paine and Sparks learned the ropes of television broadcasting, establishing strong connections with scientists around the world and developing an expertise in producing filmed accounts of their work. In the three decades that followed, these three men became central figures in wildlife television. Brock and Sparks both went on to produce episodes of Life on Earth (1979), with Brock eventually producing The Living Planet in 1984 and Sparks becoming head of the NHU (1989-1992). Barry Paine produced many episodes of the series The World About Us (1967–1986), finally becoming the voice of the series The Natural World in 1987 when it replaced The World About Us as Bristol’s flagship programme. As a nursery for new broadcasting talents, Life had a long-term transformative impact on wildlife television.

A typical episode was recorded in a Bristol studio. In the style of a magazine show it featured several items: from discussions of the nature of animal aggression to debates over population control in animals and humans through to investigations of animal communication signals or the analysis of parent/offspring relationships. A theme recurring in these discussions was to consider humans as animals, and to draw from studies of animal behaviour to lay the groundwork for a human ethology, an approach which Desmond Morris eventually developed in his Naked Ape (1967). As well as animals brought on the set, film sequences projected on a screen in the studio served to illustrate these discussions and to demonstrate specific points. These sequences usually depicted new ideas or findings, making them visible to television audiences who were able to witness expert discussion at first hand and vicariously participate in the scientific inquiry. 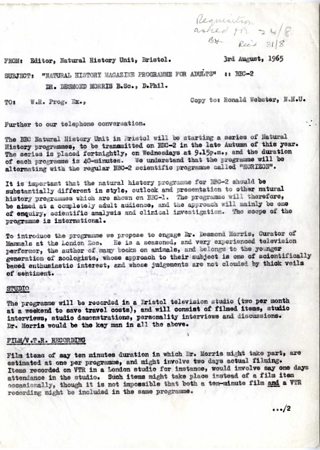 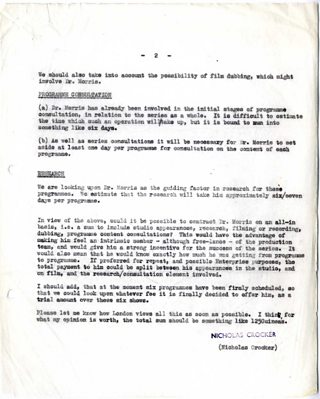 Science in the making

As Ronald Webster noted in his first Radio Times billing for the series (11 Nov 1965): ‘If we pose a lot of questions we do not necessarily propose to provide definitive answers—because there may be none yet’. Life showed science in the making. Furthermore, by depicting on film the unanswered questions which move science forward the series created the notion of a close association between filmmakers and scientists, and it framed film as a participation in scientists’ work rather than as the downstream representation of science already done. In doing so, the new programme carved a place for wildlife television in science; not as an onlooker but in the thick of the action.

With Life, in 1965 David Attenborough created a series which rested on firm scientific foundations and favoured the establishment of a team of professional wildlife broadcasters at the NHU. The series ran until March 1968, owing its sudden interruption to Desmond Morris’s departure to Malta after the successful publication of The Naked Ape (1967). In little more than two years, Life made a big contribution to changing audience expectations of wildlife television, from programmes ‘simply showing the beauties of nature’ to programmes that provoke viewers to engage ‘in a serious and critical way with new trends and ideas in zoology’, thus paving the way for more ambitious wildlife television enterprises such as Life on Earth (1979), The Living Planet (1984) and The Trials of Life (1991).

Jean-Baptiste Gouyon is an Associate Professor in Science Communication at the University College London (UCL) department of Science and Technology Studies (STS). A historian of science, his research is on the history of the presentation of the sciences in visual media (TV, film, museum) in twentieth-century Britain. Besides his work on the history of wildlife television in Britain (he is the author of BBC Wildlife Documentaries in the Age of Attenborough [Palgrave, 2019]), Gouyon publishes on the history of science on TV, and on the history of the Science Museum.

The BBC Symphony Orchestra at 90: the first European tour