The BBC Written Archives Centre, in the leafy suburb of Caversham, houses a long century’s worth of materials relating to the BBC’s endeavors in broadcasting, film, and print. Following a suggestion given to me by Professor Edward Mendelson, whose pioneering bibliographical and editorial work on W.H. Auden brought him to the Written Archives Centre in the 1970s, I spent two weeks during the summer of 2016 immersed in their collections.

An exercise in listening: The Listener and the British Public

One of the BBC’s enduring legacies was its fostering of the literary arts through the celebrated magazine, The Listener. This was continuously published from 1929 to 1991, then had a late, brief revival as an online publication in 2000 by Peter Fiddick, its last print editor. As a widely read periodical, The Listener exerted a profound influence on the British reading public during its heyday in the 1930s through the 1950s, shaping tastes and competing admirably with the New Statesman and the Spectator for the eyes of upwardly mobile Britons. As Professor Alexandra Lawrie of the University of Edinburgh writes, The Listener was “an informative, accessible and dynamic cultural magazine” and “[a] crucial conduit for disseminating intellectual ideas to an aspirational 1930s public.”

The circle of writers and intellectuals cultivated by the magazine—Auden, Virginia Woolf, Bertrand Russell, Dylan Thomas, and George Orwell among them—helped shape 20th-century English cultural consciousness. As I studied the magazine’s files and learned more about the principles that defined its incarnation, the characters involved seemed present and immediate in their democratic, questing zeal for promoting good writing, edifying ideas, and long-form intellectual investigations. They did this across an impressive array of subjects, from modernist art to geography to the literature of the avant-garde.

For archival celebrants with literary inclinations, the WAC’s holdings are largely unmined—and therefore particularly exciting—research territory. During the course of my research, I came across a series of payment ledgers that offered rosters of contributors for each issue of the magazine. This included the authors of its anonymous book reviews, which appeared in a section called “The Listener’s Book Chronicle,” and spanned two to four pages in every number. By comparing reviews which had no byline to the data in the payment ledger, I was able to unmask the reviewers’ hidden identities. The result was the rediscovery and reattribution of more than forty articles by Stephen Spender, twelve by Graham Greene, nine by Elizabeth Bowen, four by Louis MacNeice, one by Thomas, and one by Stefan Zweig.

Cultivating a masthead and an audience 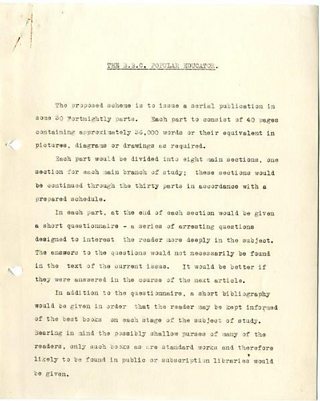 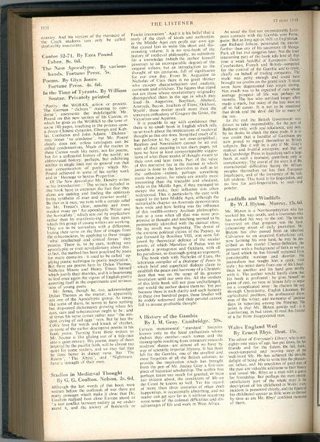 The seeds that blossomed into The Listener were planted in conversations held during Lord Crawford’s Committee of 1925, which launched “an inquiry into the possibilities of broadcasting in relation to adult education.” The early aims of The Listener are given in a June 1928 proposal held in Caversham. It was to be called the B.B.C. Popular Educator; each issue was to consist of 40 pages; and it would be divided into eight parts, for “Science, the Language and Literature of the British People, Modern Languages, Business, Mathematics, History, Geography, Art and Music.” Only one sentence in the several-page proposal is underlined: “Every subject referred to in this scheme, however abstruse it may appear to be at a first glance, is capable, in the proper hands, of being told to readers or listeners as a fascinating and romantic story.” Its first proper editor was Richard “Rex” Lambert, an accomplished historian and playwright.

The magazine’s inaugural issue of Wednesday, January 16, 1929, seemed to escape most popular notice (a fact that Lambert attributed to an unfortunate lack of support from the education community). A nine-month post-mortem by Lambert reveals his initial disappointment towards the magazine’s anemic entrance onto the scene: He lamented that it “lack[ed] a certain ginger…owing to the avoidance of controversial subjects.” Lambert complained again that it needed “for an Editor to clothe it with his personality.” Perhaps The Listener’s most masterful tailor was J.R. Ackerley, a gifted literary editor and the author of Hindoo Holiday (1932), My Dog Tulip (1956), and the autobiographical They Think the World of You (1960). Ackerley’s magnetic sensitivity to burgeoning literary talent resulted in his becoming one of the premier English editors of the 20th century. 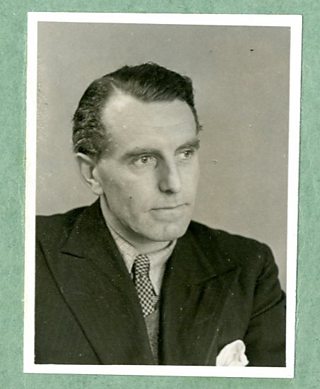 Ackerley embraced controversy and authenticity both as a literary editor and as a public figure (his relatively open homosexuality was uncommonly bold for the time). His modernist inclinations transformed the magazine, sparking, kindling, and sustaining an intellectual revolution across two decades and millions of words. Having worked in the BBC Talks Department since 1928, Ackerley went on to join The Listener as literary editor in April 1935, replacing acting editor Janet Adam Smith.

At first, Ackerley seemed asleep at the helm of the ship. In his summer 1935 performance review, Lambert excoriated Ackerley’s editorial skills, calling him “an extremely slow worker,” characterizing the articles he selected as “not especially interesting,” and even writing that Ackerley was “left out of editorial meetings.” By December of the same year, Lambert wrote that Ackerley had much improved—Lambert predicted that “he will be a very good literary editor,” in spite of his “naturally ‘Bohemian temperament.”

In his first few years at The Listener, Ackerley published pieces by Graham Greene, George Orwell, W.H. Auden, E.M.Forster, and other luminaries. The magazine’s editorial policy under Ackerley was catholic, definitive, and daring in its tastes. In 1930, The Listener’s circulation was 52,000; by 1936, it climbed to more than 70,000. 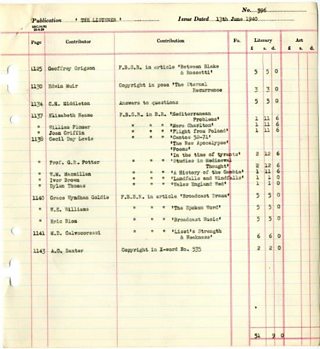 The Listener, like many highbrow magazines from the earlier half of the century, insisted on an anonymous book reviewing policy. Ackerley, according to a November 1943 note, was “greatly in favour of anonymity, on the grounds that a reviewer wrote for the journal and the review was published with the backing of the journal, and carried with it the weight attaching to the journal and not the individual reviewer. He thinks it makes for more liveliness and controversy.” The magazine switched over to signed book reviews in 1958, much to Ackerley’s consternation.

In total, a few weeks of investigating yielded nearly seventy previously unnoted book reviews, ranging from a single-paragraph review by Dylan Thomas of a book on Wales to substantial meditations on T.S. Eliot by Stephen Spender. Attesting to The Listener’s interdisciplinary focus, the reviews—by Greene, Bowen, Spender, Thomas, and MacNeice—touch on everything from international relations, the war, spiritualism, and conceptual art to studies-in-brief on Walt Whitman, Emily Dickinson, and James Joyce.

They are attuned to the seismic shifts wrought by the onset of the Second World War and all its stark disorderings and disfigurings of Europe. Stephen Spender, for instance, would review Dylan Thomas’ Map of Love in the 19 October 1939 issue; as the war worsened, he identified with Thomas’ powerful intimations of “elemental passions and extreme conditions of human existence, birth, death, despair, violence.”

Citizenship in the digital republic of letters

My journey to Caversham drew me into a 21st-century republic of letters, spanning generations, continents, and disciplines. After compiling a list of potentially undiscovered reviews in The Listener, I confirmed their authorship by visiting the British Library, the Bodleian, and the New York Public Library.

If archival research is a kind of séance, a communion with the muted—but audible—voices of the past amid spires of dusty books and papers, it is equally a way of connecting with people in the present. I had the privilege of corresponding with leading bibliographers and scholars; I tracked down elusive leads provided to me by Matthew Spender, the poet’s son, and Hannah Ellis, the granddaughter of Dylan Thomas, who introduced me to the Dylan Thomas Trust and Professor John Goodby, Thomas’ leading editor. More writings by John Betjeman, Cecil Day-Lewis, Lord Asquith, Leonard Woolf, Bertrand Russell, and others await identification in Caversham.

With the entire run of The Listener available electronically, the internal files warrant the same attention. Literary citizenship in the Digital Age requires that writers and researchers rise to the archival occasion of our time: The digitization and subsequent processing of large amounts of material, much of it lost to history. By sifting through the accreted layers of our shared history and rescuing voices from readerly oblivion, we can forge a more democratic and inclusive canon and encounter our significant authors anew in their own words.

The Listener scans are by kind permission of Immediate Media.

Michael J. Abolafia is a writer, editor, and archivist based in New York City. A 2017 graduate of Columbia University, he has contributed essays to the Times Literary Supplement, the New York Daily News, and Brooklyn Magazine. The reviews mentioned in this article will appear in the Elizabeth Bowen Review and A Sort of Newsletter, published by the Graham Greene Trust.

The Road to Milk Wood