The Empire Scripts Back

For the past ten years I’ve been researching the cultural history of West African and Caribbean radio writing at the BBC in order to try and better understand the critical mid-century decades of decolonization, shrinking British sovereignty and mass migration to the metropole.

Between the 1930s and 1960s, the BBC commissioned radio scripts and broadcasts by around 300 African and Caribbean contributors, including an extraordinary series of then unknown authors: V.S. Naipaul, Derek Walcott, Una Marson, George Lamming, Louise Bennett, Chinua Achebe, Wole Soyinka, Amos Tutuola. Yet surprisingly, given both the pedigree of its individual contributors and the sheer numerical scale of its output, relatively little is known of the actual content of the broadcasts.

Most of the sound archive from this period has been wiped - destroyed decades ago when the tight budgetary constraints of the Overseas Service and the relative expense of recording technologies made the costs impossible to bear. But thankfully many of their scripts still survive, preserved in silence at the BBC Written Archives in Caversham.

Caversham is quintessential suburbia. Just beyond the thronging commuter traffic of its main arterial road, the only sound you are likely to hear as you approach the archive is the hum of hedge trimmers, irrigation systems sprinkling spacious lawns, or occasional fragments of The Archers echoing from conservatory windows. Towards the upper end of middle-class, Caversham is largely white and well-heeled.

It is also home to probably the largest gathering of pioneering West Indian and West African writers anywhere in the world. They reside in the Tardis-like setting of the BBC Written Archives: a 1930s bungalow whose diminutive façade gives way to a chilly air-conditioned storeroom the size of an aeroplane hangar.

The scattered and largely uncatalogued correspondence and scripts of the black Atlantic artists it houses, still has a great deal to tell us about the mediation of Britain’s transition from metropolitan centre to post-colonial periphery. And about the post-colonial periphery’s own coming into voice during the mid-decades of the twentieth century as it emerged from the shadows of empire and on to the over-lit stage of world literature.

Some say it started with ‘Voice’: a short-lived literary magazine series on the radio, produced by George Orwell in 1942 on the Indian Section of the BBC’s Eastern Service. This programme brought together the likes of T.S. Eliot, Mulk Raj Anand (Indian author of Coolie and Untouchable), William Empson (English literary critic), and Una Marson (Jamaican poet), all pictured below. 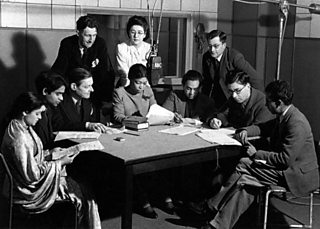 While BBC Monitoring (recently vacated, but just down the road from the BBC Written Archives) was famously eavesdropping on global events during World War II, the Corporation was also projecting the voices of resident Indian, African and Caribbean artists in London back home to the colonies.

The overall aim of this BBC activity was to produce counter-narratives that could challenge German and Axis radio propaganda targeting Britain’s far flung empire. It also hoped to foster a culture of reciprocity and friendship at a time when overseas service personnel were badly needed to help with the war effort. Orwell’s Voice, as the photograph above from the BBC’s overseas journal London Calling demonstrates, aimed to capture the cosmopolitan and collaborative spirit of such programmes. 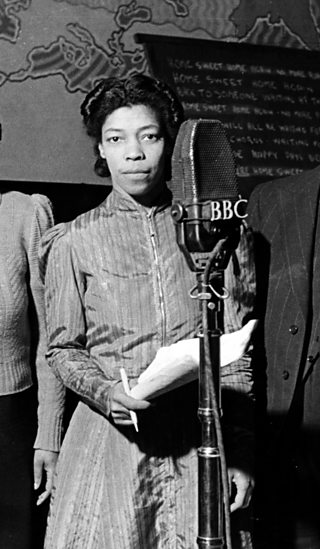 The Jamaican poet, Una Marson, was one of the BBC’s earliest and most influential recruits. I have described in detail elsewhere, the casual combination of hospitality and hostility she encountered both at and beyond the London studios of the BBC. Her breakdown at the end of World War II meant she was forced to leave the BBC in tragic circumstances. But one of her lasting legacies included the pioneering radio programme, Caribbean Voices, a Sunday night literary magazine series which paved the way for the many of the writers listed above.

Although Caribbean Voices ran for just fifteen years (1944-1958), a relatively long spell for a series on the Colonial Service, the programme is now recognised as a key catalyst in West Indian cultural nationalism and the making of twentieth century Caribbean literature. The story is told in more detail through sound, text and image on the BBC website ‘100 Voices that made the BBC: People, Nation, Empire’ [https://www.bbc.co.uk/historyofthebbc/people-nation-empire/caribbean-voices].

I began by suggesting that the BBC’s Sound Archive no longer exists, but that is not entirely true. However, when I was invited by Professor David Hendy to write a short piece for the ‘100 Voices’ site, I was partly persuaded by the enhanced access it gave to what represents the Holy Grail for the BBC researcher: the Sound Archive.

Unlike the Written Archives, the Sound Archive remains largely off limits to ordinary academics like myself (though it is partially accessible to external researchers via the British Library Sound Archive). While it confirms the widespread erasure of so many of the recorded voices and sounds of that moment, some have miraculously survived, either as early radio broadcasts, or television programmes. Selections from these sound recordings are now available for the first time on the ‘100 Voices’ site. Among the things they reveal, is the expressive force of this literature on air which placed a new emphasis, not just on what writers said, but on how they said it.

The Pioneering Women of the BBC Foreign Department