Professor of the Arts on Screen, University of Westminster

Those of us privileged to undertake research at the BBC’s Written Archives Centre in Caversham regard its holdings with reverence. The repository of the organisation’s papers of all kinds since 1922, Caversham guards the details of innumerable interactions with the powerful, the talented and the outraged. Here too are countless legacies of the bureaucracy that kept the studios humming and the staff canteens stocked. Key to the delights of Caversham are the files that have to be newly checked for sensitive material before one is permitted access. Most often this means that the archivist and you are the first to open the folder in decades. Inside you may find only a clutch of faded transport dockets and hospitality requests, but the prospect of revelation is always potent.

Among my current interests is the little-regarded programming of early television, which I take to be that from before the 1953 Coronation of Queen Elizabeth II. That June day is often (perhaps too often) regarded as the moment of television’s birth, not least because extracts of the tele-recordings from Westminster Abbey endlessly recycle the triumph of the new medium. By contrast, from the nearly three years of pre-war broadcasts, and from transmissions between June 1946 and May 1953, we have vanishingly few traces of the actual output. Which makes the written archive records of production memos, scripts, props lists, contracts, floor plans and management diktats all the more precious. And this is perhaps especially so when a production was aberrant, or eccentric, or when it was an all-but-forgotten moment of true originality. Such is the case with the School Television Experiment of 1952, the memos, schedules and scripts of which are preserved primarily in the dull orange folder bearing the number T27/8.

The BBC had been broadcasting to schools since 1924 and radio programmes for formal education developed into a key service during and immediately after the Second World War. In 1947 two-fifths of schools in England and Wales were registered for listening, and the programming was overseen by teachers and others who constituted the quasi-autonomous School Broadcasting Council. The Council was keen to see television tried out in schools, although initially the BBC was cautious, pleading lack of funds and noting that television screens were not sufficiently large to be effective in a classroom. In 1951, however, the Council prevailed and the BBC agreed to a pilot project in May the following year. During the course of four weeks, each afternoon a single programme was transmitted from the studios at Alexandra Palace on a wavelength not otherwise in use. Just six schools in Middlesex were equipped with receivers. 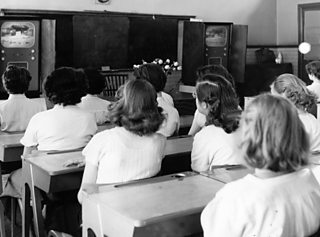 The idea of television for schools attracted some surprising opponents, including the Archbishop of Canterbury, Dr Fisher. In a speech to the Society for Promoting Christian Knowledge, he characterised the idea ‘as nothing less than a perfect disaster [because] it drove another wedge between the teacher and the child.’ In an editorial, however, The Times, defended the plans, opining that ‘the appeal to eyes as well as ears should prove stronger than the appeal to ears alone.’

And what the documents in T27/8 allow us to reconstruct in remarkable detail is how a small and hard-pressed team working with minimal resources conjured into being a clutch of basic live broadcasts concerned with science, aesthetics, current affairs and ‘the industrial scene’. There are hand-written notes and typed memos about everything from which font should be used for captions (Gill Sans), to who would make an elaborate exploding volcano set (which proved highly contentious) and what the final costs were of each individual broadcast. ‘Black and White in an African Village’ was the most expensive at £179 8 shillings and 7 pence, largely because of the costs of purchased film footage. ‘Maps and Mountains’, however, was made for just £32 17 shillings and 3 pence. There are notes for teachers as well, including the request that each child watching ‘How to make tiles out of plaster’ should be equipped with a formidable list of elements including about ¼ lb of best white plaster, 2 jam jars of water, a lump of plasticine the size of an orange, and four straight pieces of wood such as rulers ‘to make walls of casting box’. 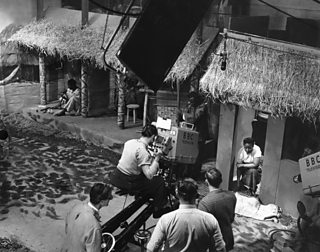 Filming 'Black and White in an African Village'.

T27/5 is another of the School Television Experiment folders, and one of those which apparently before a day in July this year had not been opened since 1952. There are no secrets within, but rather the richly revealing camera scripts and floor plans for the ‘Craftsmen and Artists’ quartet of broadcasts. In the third programme the renowned textile designer Lucienne Day demonstrated how she used repeating patterns in her work and encouraged pupils to try out their own visual ideas. Her words are preserved, along with descriptions of the studio set, the camera framings and moves, and how long each shot was on screen. While I am frustrated that there appears to be no extant tele-recording (although one seems to have been made for showing to the School Broadcasting Council), as I read the script and stare at the plan I can reconstruct to some degree what it was like to sit in a Middlesex classroom in 1952 watching this. In my mind’s eye I can see one of the earliest programmes made especially as a contribution to the education of those who were among the first young people to be called teenagers, who would go on to live through ‘swinging’ London, the years of Prime Minister Margaret Thatcher and the Millennium, and who are now in their early eighties. 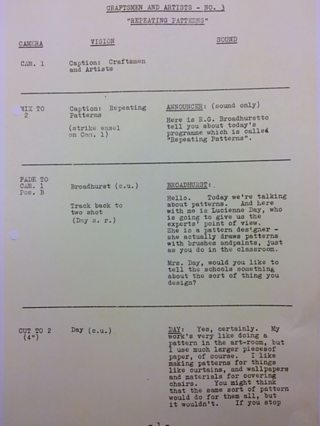 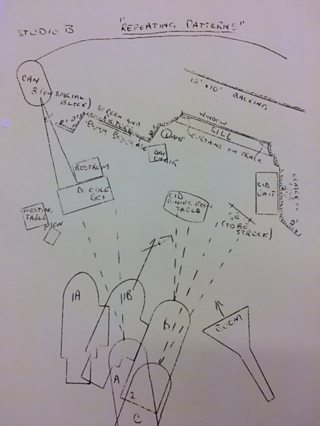 Once the experiment was concluded the School Broadcasting Council and the BBC agreed that it had been a success and that many lessons had been learned. But in large part because funding was not made available it was to be another five years before in the autumn of 1957 the Corporation began regular broadcasts to schools. By which point, and much to its chagrin, the BBC had been beaten to the screen by a modest service for London schools by the upstart ITV contractor Associated-Rediffusion. T27/8 and associated folders at Caversham, however, hold the evocative evidence that television for schools was most definitely another of the BBC’s ‘firsts’ in the still largely forgotten television years immediately after the war.

John Wyver is speaking about the School Television Experiment at the Lights, Camera, Learning: Teaching with the Moving Image conference, at Birkbeck, University of London, 23-24 November