During the Second World War millions of people in Nazi Germany turned to the BBC’s German-language programmes for reliable information about everyday events. Here they could find out how many people had been killed in air raids. They could hear about the food that London restaurants offered on menus while they had only stale bread and Ersatz coffee to consume. They could listen to Thomas Mann pronouncing his views on the war over the ether from California. They could also be entertained by songs and features that ridiculed their Nazi leaders.

The creation of the BBC German Service

What began at the height of the Sudeten crisis, launched 80 years ago on 27 September 1938, as a haphazard attempt to convince people in Germany that Neville Chamberlain wanted to preserve peace soon developed into a sophisticated media operation. It was one designed to deliver the same message across all of its programmes: that the Nazis would lose the war and that the Germans were best served to support the Allies in their efforts to get rid of Hitler.

As it systematically expanded its German-language programmes, the BBC became the most essential tool in Britain’s propaganda war with Germany, hoping that their own objective, fact-based broadcasts would be favourably compared to the distorted news that Nazi-occupied stations unleashed on listeners. And by the time the war turned against Germany in late 1942, the BBC’s decision to deliver impartial news even if it meant that Allied setbacks had to be reported was clearly paying off.

Despite Nazi attempts to jam foreign stations and prosecute individuals who were “inhaling English,” the BBC German Service had become an important source of information for people living under Nazi rule. Although muted, its voice came out of radio speakers all over the country to offer news and advice, entertainment as well as hope to people who were extremely keen to listen to everything the British had to say to them. 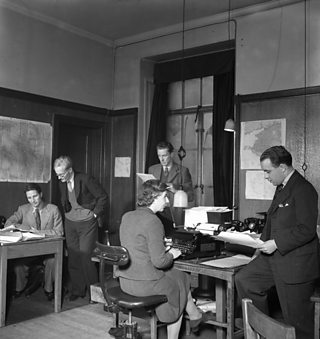 Who worked for the Service?

Broadcasting to the Enemy tells the story of the people responsible for delivering the programmes that went out on BBC airwaves to listeners in Germany. Who were the individuals behind the microphone, whose names could only be mentioned in whispered conversations on the continent? Who wrote the features and satirical sketches that offered comic relief to housewives struggling to obtain enough food to feed their families? Who made decisions about programme delivery and staffing?

Drawing extensively on previously unexamined material from the BBC Written Archives Centre, my research sheds light on the difficult working conditions in the German Service in war-time London. Here, in the BBC’s offices and recording studios people from different nationalities, social backgrounds and political convictions collaborated and argued about the delivery of an effective propaganda programme that could assist the Allies in defeating the Nazis. 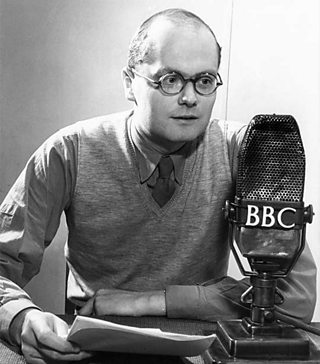 Visitors might have met Hugh Carleton Greene, Graham Green’s younger brother, who joined the Corporation in 1940 as Head of the German unit when he was only 29 years of age. Erika Mann, Thomas Mann’s eldest daughter, would appear sporadically in front of the microphone to send angry messages to the Germans who had so far failed to overthrow their Nazi rulers. And on 1 April 1940, the Austrian actor Martin Miller was called into a BBC recording studio to deliver the first of many Hitler parodies that the German Service would transmit to great effect throughout the war. So convincing was his performance as a raving Hitler that the BBC received requests for information about this unannounced Hitler speech from the American broadcaster CBS before Miller had even finished the programme. 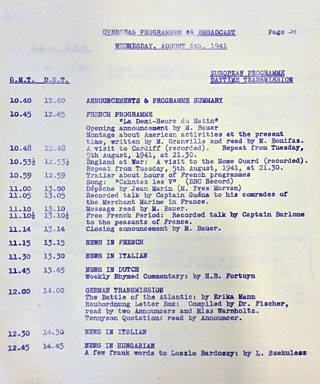 The stories of these and many other people working for the German Service offer a fascinating new picture of the wartime BBC. It shows that the Corporation’s propaganda work was the result not only of abstract governmental directives but of the work of individuals who put long hours and a seemingly inexhaustible amount of energy into their task of publicly contradicting the Nazis. Some of them were British, others had come to Britain as refugees from Nazi-occupied Europe. And while they were working, eating and occasionally sleeping alongside each other in BBC-occupied premises across London, they discussed the effectiveness of their broadcasts or wondered about the practical implications of instructions that the Political Warfare Executive had just sprung on them.

Britain’s future role in Europe remains undecided. Now is a good moment to examine the multilingual and transnational alliances that influenced working practices within a British organization that had made it its mission to fight the spread of populist nationalism. In this new, people-focused history of the German Service, the BBC emerges as an intercultural contact zone. At a time marked by global uncertainty and international tension, it was a place that clearly valued intercultural encounters and collaboration.

The Empire Scripts Back