Thanks for all the #tags 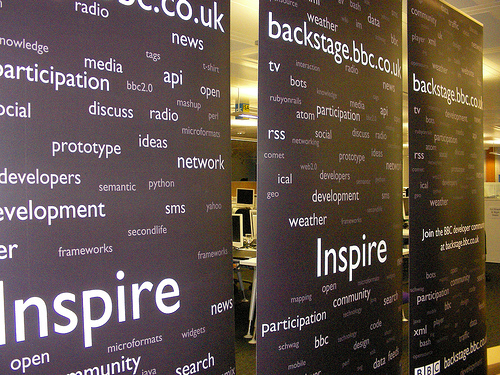 So we're finally at the very end of a era. There's a few more things to sort out but generally its all come to an end. This blog will be mothballed for the future.

I'd like to thank everyone who took the time to get involved with Backstage.bbc.co.uk, be it to rave about what we were doing or shout at us about the DRM stance of the BBC. Without people like yourselves giving up your time to get involved, hack, tweak and scrape the BBC of its data, it wouldn't have been anywhere near the success it turned out to be. All this will go down in history as a breath taking project with many fingers in many pies which out performanced its very humble start and drove the way the BBC will move forward in the future.

Everyone I speak to since the announcement has asked in there own way, "so what next?" Well it would be a disrespectful to say something like backstage. There is almost nothing like the phenomenon which was BBC Backstage. As you might have heard many times, it was of its own time and to be frank it was put together by some of the smartest people in the UK net scene at the time.

R&D use to have a department called Imagineering which then became Creative R&D. That department was a magnet for talented people with wild imaginations and creative solutions. This is where Backstage came from along with projects for the creative archive, innovation labs, etc. Now Creative R&D is just R&D and the traditional research has been turned on its head forever more.

I've witness the backstage methodology just spread like wildfire. Every single day I hear some down right zainy ideas being talked about between engineers and researchers. Ideas that 5 years ago would have been shot down before they even get a chance to stretch their wings. The "Backstage approach" is common in the lanaguage between engineers, researchers, programme makers, etc. The legacy of Backstage is transfixed on the BBC and will never be forgotten.

In a economic environment like we are in now, making things happen will be all important. We won't stop taking risks, its what we do, but its important to be extremly cost effective with the ones we do.

Well we all have ideas about what areas could do with some creativity but its the combination of the ideas which will make up the replacement. I can tell you the core activity of watching and engaging with the hackers will prevail in some form. Data will be a large part of what happens next but maybe not at the level we were at before. Others have taken that fight onwards and its our time to look to the next 5 years.

Alan Kay once said, "The best way to predict the future is to invent it." And you'd be hard pressed to find anyone to disagree with him. Rather that talk about what would replace Backstage, we will be inventing together with yourselves, the future. We can't wait...

But before we leap too far into the future, theres one more thing to do. This was personally one of the best times of my life to date and I'm proud to be able to see it through right to a respectable end. I wish I could name everyone who was involved in Backstage but that list would be almost endless and the ebooks have done a fantastic job doing some of that. (you can also buy it in written form now)

So in Backstage fashion, thanks for all the tags... you were all truly inspiring and together we inspired.

On behalf of everyone who collaborated and helped make backstage what it was over the last 5+ years - Thanks for all the tags!