Thinking Digital 2010 was a blast... It was an excellent two days of insightful, informative, eclectic and mind-bending talks around digital or technology related subjects. It's one of the few conferences that I attend knowing I will do my best to attend most of the talks - as the quality of speakers is fantastic! 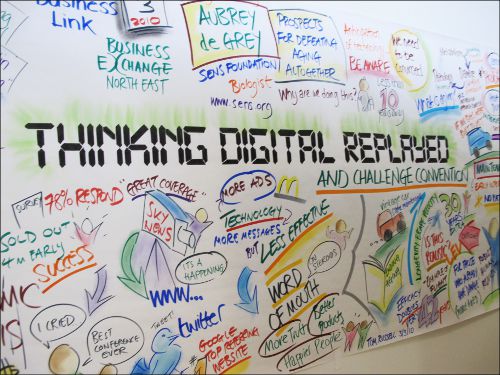 Here's a seriously pruned snapshop of the many of the talks I attended: Joi Ito, , advised us not to follow trends but to "question authority and think for yourself". How giving stuff away for free is incredible, how most of the internet is run by amateurs who are not paid "open source lowers the cost of failure and drives innovation". Documentally, took us on an entertaining trip via stories of his exploits in Iraq and Parkistan, how his kit has changed over the years, but says that all you really need these days is a smart phone, plus he mentioned the importance of backing up data "My data is backed up in 3 places, data just vanishes, especially when crossing borders!" Jon Drori, gave two brilliant talks. Firstly, a run down on 23 of the classic pitfalls of business relationships, including nuggets: "avoid understanding your audience or what they want and how they work" and "never confuse a neat idea with a strategy". Followed on day two by a sum-up of compelling experiences - they were surmised as: Defined, Fresh, Accessible, Immersive, they are Significant and are Transformative. 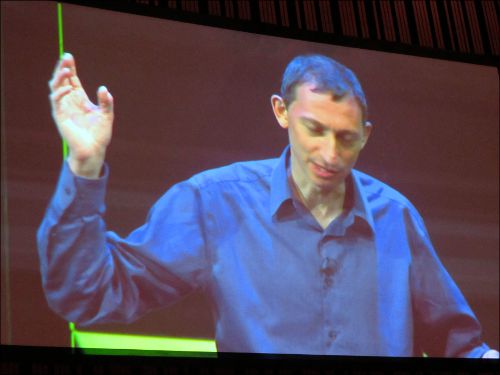 Andy Hobsbawm, of DoTheGreenThing, talked about the challenges his company faced in reframing sustainability and driving behavior to make recycling desirable. Also, initiatives such as Walkcast to aid the enjoyment of walking and Glove Love - a lost glove = a double throw away! Tom Wujec, told us about the 'marshmallow challenge' - a team building exercise where the aim is to build a structure with items such as spaghetti and string, then balance a marshmallow on the top. He described various personalities and their approaches to this, including that recent business school graduates do worst and the people who do best are kindergarten kids as they achieve the exercise via play and enjoy it - "they don't seek power to achieve the goal". Tom finished with the warning that "every project has it's own marshmallow - the assumption is that a marshmallow is light and fluffy, but it's not - don't overlook it!" Luis Von Ahn, after introducing himself by asking "You know Captcha? Do you hate it? Well, I invented that..." Roughly 200 million Captchas that take roughly 10 seconds are typed every day, so Luis wanted to find a way to use all this human effort for good. He came up with Re-Capture, a way of using the system to get people to read words from old books that computers can't recognize from OCR. Roughly 80 million words solved a day, equals about 4 million books translated per year! Robert Lang, we were taken on a charming journey centered on origami, via history, maths and computer aided design. We heard about how paper-folding patterns can help with problem solving for scientists and engineers looking for clever ways to get around size and logistical problems. For example, the umbrella pattern has been used for a 5 metre collapsible space telescope, plus solar sails, in other uses: airbags for cars and medical stents that fold up small enough to go through an artery and then unfold. Jer Thorpe, gave an interesting talk on data visualization and Processing with some lovely imagery. When he first started playing with Arduino he wasn't sure what to do with it, so talked to his 10 year-old self and decided to create an alarm for when aliens landed with added wireless functionality! David Siegel, discussed the importance of the semantic web and searching for data such as the difference in results you'll get between Google and Wolfram Alpha. He touched on rethinking your relationship to information and how we will soon be at 5 billion connected devices which will be capable of pumping out our information automatically, growing exponentially. David predicts that in the future we will move from "push to pull" and have 'data lockers' to store our information in various levels depending on relationship, e.g. family, purchasing, work, etc - it was hotly debated who might be the trusted keepers of these! 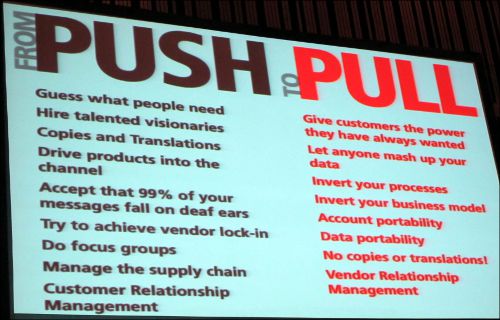 Richard Titus, Friction: Good, evil, necessity or fuel?, a talk about 'friction' - "Friction is the evil of all motion" a quote from Fear of Physics and went on to give us various examples and lessons: 'Privacy is NOT secrecy': 'Secrecy is almost non-existent today'. Richard also gave probably the most re-tweeted quote of the day "Data is the new Oil" which has already appeared on a badge! Tom Scott, weaved a cautionary tale about social networking and flashmobs out of control, plus also showed us his Evil app that reveals easily obtainable phone numbers from unsuspecting people on Facebook. Ken Banks , FrontlineSMS enables communication in third world Africa, in areas that don't have internet connectivity. An example is software for laptops and mobiles, which allows simple text and image communication for non-profit organizations, doctors and human rights campaigners in dangerous situations. Another system used a mobile phone for blood smear diagnosis.  Big thanks to Herb Kim & the Codeworks team for a great 3 days at Thinking Digital 2010 - looking forward to next year's conference already. Lastly and not least, we all missed Ian Forrester very much at TDC and we sent him positive vibes en masse - get well soon, Ian!