Thanks to all those signed up, you're guaranteed a place at the June event - we've written to you all on email.

Unfortunately due to high chance of purdah being upon us any time now, it is ver likely the event will fall during purdah.  This being the case, data.gov.uk would not be able to have any input such as speaking, or promoting the great work done on the weekend by those concerned.

Considering this, we have made the decision to push the event back to June - so we can all get together in the summer and make some superb visuals.

In the meantime, sign up is still open, and we hope to announce some very exciting guest speakers very soon.

Thanks for your interest, and get registering to come if you haven't yet! :)

API's and an Ontology for Wildlife

Apis And APIs a wildlife ontology
Presentation by Tom Scott.

There's no doubt that our commitment to Semantic Web technologies is very strong. The work that has been done around /programmes, /music and recently /topics is certainly of interest to those who would like to explorer and remix data under the backstage licence. But its also a way forward for owners of huge data resources and not sure how to best release there stuff.

The Wildlife Ontology was originally designed to support the publishing of data from the BBC Wildlife Finder application. This application provides access to a rich set of information and data about biological species, as well as pointers to BBC broadcast output that relate to these topics. The ontology should therefore complement the existing Programmes Ontology for describing TV programmes.

Whilst it originates in a specific BBC use case, the Wildlife Ontology should be applicable to a wide range of biological data publishing use cases. Care has been taken to try and ensure interoperability with more specialised ontologies used in scientific domains such as taxonomy, ecology, environmental science, and bioinformatics

If you visit the wildlifefinder site you will be forgiven for asking where's the API, wheres the data? Simply find what you want and pop .rdf on the end and you got everything and more in a structured data format which you can remix and mashup to your pleasure.

I'm very excited by this data and the whole way its been done, you could imagine something like the Solar System having the same treatment in the future. Full credit to Tom Scott's team and Tails There's tons more information in Tom's presentation above.

BBC Backstage was back at Maker Faire 2010 with BBC R&D to showcase a few of the experiments we've been working on.

Maker Faire 2010 took place at the Centre for Life in Newcastle this weekend just gone. The event, on the opening weekend of the Newcastle Science festival, and the National Science week, brought together hackers, makers and engineering hobbyists and creators from across UK and europe, and the wider world, for a 2 day festival of making stuff.

There's lots more coverage on the R&D Blog of each prototype but there's also a lovely video which you can watch which covers most of the weekend in Newcastle.

Thanks to everyone who helped pull the whole thing together and made it a great weekend. I expect by now, you may have seen we were giving away special edition coloured backstage tshirts to people who came to the stand. Look out there will be more chances to grab yourself a special edition tshirt.

Pleo is one of those super high tech toys which people seem to love or hate, a bit like Sony's Aibo which it no longer makes. It draws a lot of attention because its beautifully life like. But how would you feel if you saw Pleo taken a part by a maker? Well this is one of the issues which was explored at MakerFaire this year. There's a manifesto which makers always quote, 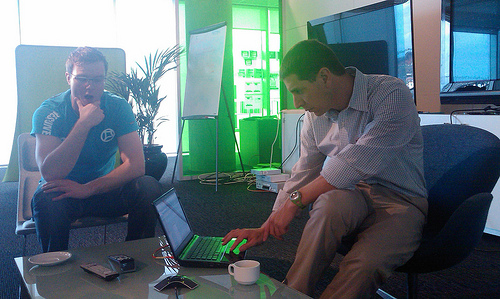 It was a pleasant surprise to see Boxee over in London. There was a large turn out for the demo section of the talk but when we got into the nitty gritty of what could we do together, things got a little more intimate. Six creative people throwing ideas around, hopefully some of them will stick and even become full BBC projects. Keep your eyes peeled...

Keep the 9th, 10th and 11th April free if you can, we're going to do a weekend of just data visualisations and data art.

The aim of the event is to facilitate an unusual opportunity allowing the diversity of the two traditional job roles to bring together imaginative use of open data sources.

Richard Stirling, Head of Making Public Data Public and data.gov.uk said, "To bring together teams of developers and designers in this way, with each adding to the other's skill set is an exciting proposition. We're extremely interested to see the results, and see what great data re-use will come from the weekend."

By combining the networks, data and experience of the three public bodies, the Data Visualisation Weekend has a vast resource to draw on, making it one of the most exciting and joined up unconferences for 2010.

Interested designers and developers can find out more and apply for an invitation via the DVWM website.

One of the biggest problems with some news today is telling the signal from the noise. It would be fair to say that around the story of the recent iplayer changes, there has been a lot of noise. Some of the noise is people wondering what just happened? While some of the other noise is people putting one and one together and making ten.

So to clear things up once and for all on the recent changes, Ian Hunter Managing Editor, BBC Online, fills in all the details on the BBC internet blog.

Most of the post is about our commitment to open source, which is worth pointing out - has never changed. But there is also a chunk about the 3rd-party applications here...

We also implement a range of technologies that attempt to check that our content is being played out in iPlayer, and not in an unauthorised 3rd-party application. This is because we need to be as certain as we can be that our content rights restrictions are being respected.

This is the key to the concerns being expressed at the moment: before we allow a device to access our content we need to check that it is iPlayer and not an application which might break our rules - for example, by storing programmes beyond the 30 day limit, or playing them outside the UK.

We know that a number of applications have been making unauthorised use of some media types and we have tightened security accordingly - this was done for several of the formats and content delivery types, not just for Flash. The result was that some applications that 'deep link' to our content may no longer work.

unfortunately one of the applications that stopped working was XBMC, an open-source media player.

Indicating that the change was not directed at XBMC or the open source community. Talking of changes, the Totem plugin issue was also in fact a bug and not in anyway related to the iplayer changes.