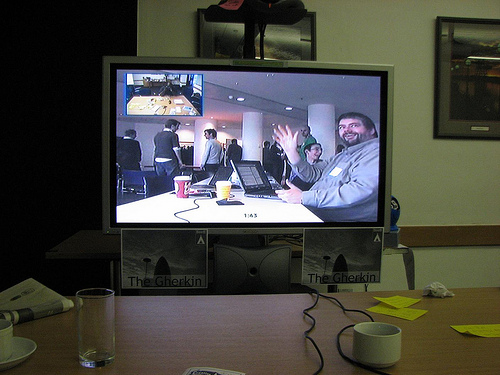 BeebCamp is the BBC's internal facing barcamp, over the last few interations its changed into something which now includes a choice of externals who are hand selected and given the free reign to wonder around with the rest of the BBC staff.

BeeBCamp breaks down the barriers between tech and creative communities inside and outside the BBC. It's a unique atmosphere where everyone participates in an informal, open forum. As an ongoing movement within the BBC, BeeBCamp has started linking people from across different divisions who might otherwise never have met.

Unlike most things which are arranged by the BBC, BeebCamp is deliberately uncomplicated, radically transparent and not by any department within the BBC.

BeeBCamp is run by and for BBC employees, but it is not an official department or division of the BBC. The views expressed here and on other BeeBCamp material are solely those of the participants and should not be considered official BBC material.

And thats the key, people are told from the start that everything said or done is public and unless you say its off limits by holding up a unbloggable sign. 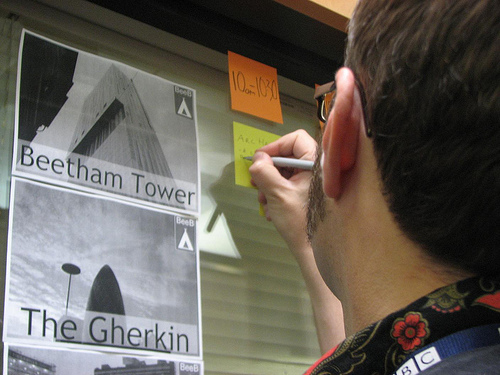 This time around, BeebCamp was held in Manchester alongside London. A skype and Video conference was setup so sessions could run in parallel. The rest of the rooms were put to good use by the rest of the participations.

As Philip says on the BeebCamp site, an unconference like this tends to be a different experience for every person, as few people will attend all the same discussions throughout the day.

Roo Reynolds, Andrew Bowden, Charlie Beckett, and Paul Murphy of the BBC Internet Blog have already written up some of their impressions of the day. There are a lot of photos on Flickr already, and more will come. 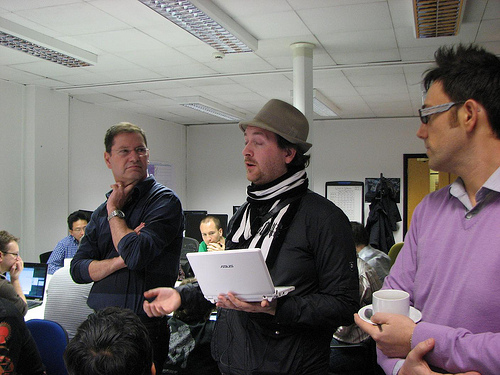 So the whole event went well and we did well in Manchester, although people were very nervious giving sessions of there own for the first time, which was a shame. Looking wider and into the future, Philip picked up on this in the closing session.

One of the good ideas from this discussion was to keep the BeeBCamp vibe going by having more sessions spread throughout the UK - Glasgow, Cardiff, important regional centres. They could be smaller or shorter events, even just a lunchtime meetup. But they'd keep the open exchange of ideas and initiative flowing. It might even be an idea to hold a whole bunch of events simultaneously in various BBC locations across the country. They wouldn't even need to be linked live; as long as the sessions had a way to report back - such as this blog - they'd all be part of the same general event. Annual or semi-annual BeeBCamps could then be the plenary session that brings it all together.

Its been a long time in coming, but BBC R&D or Research & Development which Backstage is part of. Has just launched its own blog on the BBC Blogs platform.

As you'd expect the first blog post is by the head of BBC R&D - Matthew Postgate. (Matthew recently opened the TEDxManchester event and of course his video can be viewed online here), and chooses to open the blog in a overview of what BBC R&D is and where its going. BBC Backstage gets a nice mention as a core part of R&D, along with its open innovation background.

Open Innovation is a core principle of how we work and builds on the collaborative traditions the department has worked to throughout its history. We appreciate the best and most creative work comes when we share what we know, and draw on a wide community to build on that knowledge. Many of our projects are collaborative efforts, with research bodies, fellow broadcasters, universities, and companies from around the world. For several years we have been supporting the 'BBC Backstage' program, opening data and resources to independent developers and 'hackers' from across the UK.

If you would like to subscribe to the blog there is RSS and ATOM feeds. There's also a Delicious account which you may find very useful as we become more open that ever before. Enjoy...

Fans can unite, now there is Fanhu.bz for everyone

Very interesting this project by Leigh Dodds and the Tails team, if a little hard to describe...

The central concept is a "Fan Hub". Each Hub is associated with a BBC ID and provides a tailored browser for shows (coming soon: artists) and related resources like series and episodes. In addition to the data directly provided by the BBC, FanHubz uses a set of semantic bots to monitor Twitter. These bots will find, analyse, aggregate, and interlink tweets with Hubs. The result is a blend of static and dynamic information which lets you track buzz around your favourite shows and artists and simplifies getting in touch with other BBC followers.

So its not only a place to find out when shows you like are coming up but also a place to discovery more like what you may like via the power of the rich data within the system. Some of you may think to yourselves doesn't the first part solve a idea I saw on idea store a while ago? Heck it might even solve Will J's ideas too. It also strikes me that using the data from Fanhubz combined with regular twittering or systems like Boxee which tweet on your behalf what your watching, you could even solve this idea by Nick Shanks.

Like Channelography there's also access directly into the data, this time via RDF using the SPARQL interface which has kicking around for a while now.

The guys have also by stealth created a solution to Jon Udell's thoughts about using BBC IDs as hashtags and translating them into human readable hashtags. For example here is https://fanhu.bz/b006m8ln Torchwood with both types on the same page. But the same page comes up if you do https://fanhu.bz/torchwood too.

Excellent stuff, can't wait for the rest of the promised stuff.

We plan to provide extended community features that will let you enhance and reuse the aggregated information. For now, you can join and leave a Hub through a Twitter interface, and rate BBC shows. FanHubz also provides a rich API for accessing the collected tweet and fan data. We are currently working on a signup mechanism so that you can add ratings and reviews directly via the fanhu.bz site.

Channelography creates statistics about BBC Programmes by reading and analysing the captions within the programmes themselves. This means you get much richer data that you would normally get from the programme descriptions themselves. Its a collaborative backstage project from the guys at Rattle in Sheffield using there already known Muddy platform.

The whole project is still in early alpha so don't be surprised if you hit a brick wall where you are expecting data. But although still very early, its a interesting project and really adds a personality to programmes and locations. For example here is the break down of BBC Three programming. Who would have thought Factual when it comes to BBC Three? if more interesting is Jesus is the most mentioned person (hummm I don't think its for the reasons you'd first imagined) and Tesco claims the most mentioned organisation on BBC Three. And this is just scratching the surface.

There is a large description of the whole project on the about page, as you'd expect. But even better like most online services, if you don't like html. Switch to the xml version by adding .xml on the end of most urls created. For example here's all the docudramas indexed by the system.

There's a lot of data visualised within Channelography and with more time its going to be interesting to see how terms shift over the channels in regards to news stories and plot lines. Don't forget if you like what you see, do drop us a comment here on the blog or even follow @channelography and @bbcbackstage on twitter. Oh yes and to anyone who says we talk about twitter far too much... the data says otherwise...

One of the conclusions from the feedback at TEDxManchester was around the lack of non-digital topics involving innovation. Well BarCampManchester2 aimed to put that right with a completely open style where the people don't just attend, they participate in the whole event. The Unconference format as its termed is right for those topics to come out which you would never get at a large conference style event. Top that by setting the whole event in a location famous for arts, music and performance and you got a recipe for a exciting weekend (The Pictures say it all I think).

There was everything from a Beatboxing workshop to a discussion on what role religion has in a digital world where all information is free. Lessons learned running a startup to deconstructing social engineering for good and bad. Google wave usage to group dynamics on twitter. It was all available alongside pizzas, sandwiches, ice cream and silly amounts of sugary food to keep people up through the night.

We have finally released the short version of Episode 3 of R&DTV. As usual you can download the episode from our official R&DTV site.

Our Assets for the video are online too, and this time we're expecting a lot more downloads because they are the full edited talks from the TEDxManchester event.

You can also subscribe to the whole lot via RSS or Itunes if you would like to keep a copy of all the videos for yourself. Remember all these videos are under a creative commons licence (Creative Commons Attribution-NonCommercial-ShareAlike 3.0) , so your welcome to share them with the world and create your own remixes of the videos. The short version we edited together is under a slightly different licence which does not allow you to remix due to some musicial copyright from Chicane - Strong in Love (Disco Citizens Mix) and Kevin Shields - Ikebana.

All the videos were captured using our tapeless system called Ingex. We captured the output of the 3 different cameras in High Def 1080p straight to a RAIDed Hard drive system then copied the as you can imagine very large streams to a couple of portable hard drives. Always backing up of course. The portable hard drives make it easy for the footage to be edited on any machine which supports the right codec. Its a very quick and painless process and does away with having to digitise or ingest tape or disc formats.

Talking of Remixing, we are happy to announce that we will be working with Kaltura to provide a simplier way to remix your own R&D TV in the near future.... Look out for the long version of R&DTV alongside the Kaltura soon.