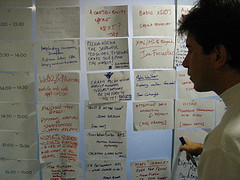 This year the MGEITF (Media Guardian International TV Festival) has spawned its own fringe event, the TV Un-Festival. This day-long event which takes place on Saturday 25 August will centre around the clash of the well established TV world and the constantly accelerating Internet world using the unusual un-conference format, where the cost of entry is participation.

The highlights from the TV Un-Festival will be presented at this special event, giving everyone a chance to speculate on the future of TV, online entertainment and cross platform narratives.

This year the TV Un-Festivial hosted by Backstage.bbc.co.uk and guided along by the fabulous Suw Charman, aims to explorer the clash with in a series of free formed sessions similar to BarCamp known as unconference style. Everyone will be able to participate by using one of the free 30 minute slots which will be available.

if your interested, Signup now and we'll see you in Edinburgh