Your Apprentice highlights so far...

After plenty of perilous tasks, just five candidates are still in the running to be Lord Sugar's new business partner. As The Apprentice is now in its final week, we asked followers of @bbcapprentice and the Facebook fan page to share their highlights from the series so far… 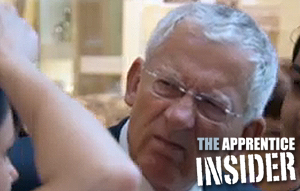 It was a fruity beginning for the candidates in which size didn't matter...

ginger_ninja24: "Not only am I the youngest, but I'm also the shortest". Wisdom didn't save you Edward!

... but an app-alling pun from Vincent, Melody's miaow and Edna's handwear definitely left their mark...

Alex Brown: I think I might have an APPle

Hollybottface: Edna's gloves were the highlight of the series so far

Lesley Fellows: Melody (fingers to temples) : 'I'm focusing for the purposes of this task.......Miaow'.

Just what is a cloche? Some candidates were baffled, while others were totally in control...

Andrea Mcparlin: Melody and Gavin debating that a cloche was a greenhouse!

Josh Tuddenham: Jim when he managed to convince the PM not to bring him back in the boardroom and then when the others started he said that the PM had made his choice and they should deal with it

Beauty treatments proved a tough obstacle for Leon to overcome... but his pinkie perked him up!

TallForAGirl: Leon's abject horror at the prospect of having to spray tan another man!

The Freemium Magazine task threw up some questionable title suggestions for the publication...

OmegaResourceGp: Our jaws dropped when Team Venture went with the name 'Hip Replacement' during the magazine task

... while Jim's efforts to clean up in the Rubbish task were ignored by a certain household...

Nobody was being ignored when a firing drew close...

Edward Plowman: Zoe giving Susan THAT look in the boardroom

'Ello? 'Ello? Je parle a little Franglais monsieur. The delights of the Paris task had many in stitches...

Chris Shipley: For me, Helen nailing the pitch in Paris was a pleasure to behold

Rahul Miah: Tom made me laugh with the rock scissors paper game

Ann Sherwin: When Nick said pinning something on Jim is like nailing jelly to the wall!

The candidates' forays into the worlds of biscuits and reinvestment resulted in plenty of amusing memories...

Ryan Mills: When they were doing the role play on the biscuit task. Cheeeesy!

Nayha Aeon Jelani: When Lord Sugar told Jim that he should get the BBIW award

Maybe if 'Snoozan' had a few Popsquits to nibble on she wouldn't have fallen asleep mid task...

myrr3n: Susan having a wee kip

Nims Bhatt: ‎"If you nod your head anymore I'm going to put you on the backseat of my bloody car" - Lord Sugar (This was funny!)

... and nor did Helen and Melody's attempts to sell to a certain retailer!

What other moments not mentioned above are your highlights from this series of The Apprentice? Click on the Comments button to let us know!