The Final: Emergency Chairs and One Trick Ponies...

It's time to erase the Nodding Hindsight Man and Mr Notepad-Calculator from your memories, as Tom has a more suitable moniker to adopt – Apprentice Winner 2011! In the throes of a gruelling interview process and tense boardroom, the inventor soared like one of his mooted flying pies to claim victory ahead of Helen. 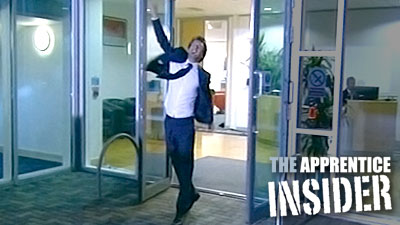 Lord Sugar stated that Tom's product to reduce back pain needed many tweaks. Only time will tell if this will culminate in the advent of an Emergency Chairscuit – a self-assembly reclining device that is also edible. Key business decisions are unlikely to be decided by Paper Scissors Stone though. As Tom demonstrated in The Final, his sheer affability, passion and creative spark will bring a great deal to the table.

Damn! Runner-up Helen's punchline to the fishy joke she told interviewer Matthew Riley was a portent for what she must have felt when the result was announced. Despite her record-breaking string of nine task victories and a brave move to deploy a second business pitch, her initial Reminder Service idea went down as well as Gavin's quest to find a Top Hat in a dry cleaners.

Skincare Susan's mistake with the word "turnover" gave Claude Littner enough scent to movie in for the kill. Surely everyone knows that a turnover is one of the pastries that Helen could have been selling in her proposed bakery? Susan later boardroom admission of "I understand that I didn't understand" failed to prevent her being fired, but her remarkable achievements in setting up her own business at such a young age were heralded.

The welcome return of Margaret Mountford caused one "champion thoroughbred" to fall at the last fence. She did exactly what it said on the tin… if that tin happened to say: "I will scythe through Jedi Jim's clichés like a hot lightsaber through butter". An unfortunate equine analogy harked back to Herr Baggs' proclamations last series, but Jim proved he was not a one trick pony. His AMSmart idea may have been rebranded AMStupid given the business context, but the altruistic idea showcased a compassionate side that was previously hidden beneath his ruthless boardroom demeanour.

So, with a cry of "YES!" that was loud enough to wake up 'Snoozan' in her nearby cab, Tom left the building as Lord Sugar's new business partner. A bright future lies ahead for the pair and one wonders what wacky inventions lie ahead…

Let us know your thoughts on Tom's victory, Helen's bold boardroom move and The Final in general by clicking on the Comments button above…