The Apprentice: You're Trending! 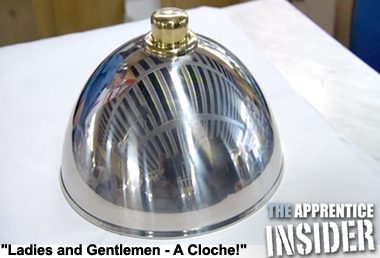 Did you think inventor Tom Pellereau stood much chance of becoming Lord Sugar's business partner in the early stages of The Apprentice? After all, his quiet demeanour and frequent task losses hardly screamed 'winner'. Yet that's what the candidate once dubbed Mr Notepad-Calculator became, despite a strong challenge from Helen Milligan.

Tom's ascent epitomised the twists and turns throughout the series, which veered between heightened drama and hilarity. Many of these moments can be encapsulated by a look at some of the Trending Topics that stemmed from the hordes of Apprentice fans tweeting during the show...

Historical figures Christopher Columbus and William Drake made their mark during the Fast Food task and Tom's (erroneous) quest for 100% British MyPy names, while the candidate's physical features caused the lookalike actor Michael Sheen to infiltrate the Top 10. Fictional characters were also prominent, with David Brent from The Office featuring on multiple occasions due to a perceived verbal similarity with Natasha, yeah, and Princess Leia from Star Wars straddling the Twittersphere due to Zoe's eye-catching hairdo on You're Fired.

The Star Wars saga also inspired the regular trending of Jedi Jim, as the Irish bulldozer of charm's purported mind control techniques were much discussed.

The acronym BBIW made an appearance after Lord Sugar dished out the impromptu award to Jim, while his Mexican cookery skills left a lot to be desired (especially in the heat department) but enabled Macho Nacho to materialise. So did a range of other culinary concoctions and not all of them were fit were for human consumption, particularly The Popscuit! Catsize and Every Dog in particular purred and barked their way up the list, but Leon's mooted Lucky Fish product swam above them and truly captured the public's imagination. Although perhaps people were wondering why exactly the fish were lucky?

Food is more appetizing when it's served beneath a cloche of course. That's a metallic bell-shaped cover and not a greenhouse, which some candidates suspected it might be during the Discount Buying Task. That elusive item was trending alongside the similarly protective top hat, which poor Gavin learnt is a garment not readily available for purchase at a dry cleaning establishment.

On the subject of clangers, Hip Replacement and Coffin Dodgers surfaced during the Freemium Magazine Task as many tweeted their shock. Jim's Franglais was a petit bit of a faux pas too, with the word Allo also trending due to his cunning deployment of the word wrapped up in French tones.

Finally, much credit goes to the winner Tom for reintroducing the playful concept of Paper Scissors Stone to the masses as a result of his decision-making methodology during the Paris Task. Along with landing a £250k investment from Lord Sugar, that is something to be proud of.