An energetic presence on The Apprentice until an encounter with Mexican food saw her binned, Natasha caught up with the sombrero wearing Apprentice Insider for a chat about her time on the show. Load-blowing, the word 'yeah' and Paper Scissors Stone were all on the menu, next to extra cold nachos, but we grilled the fired candidate on the task failure first… 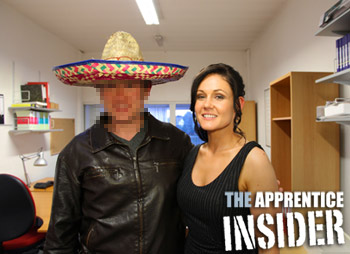 "We were trying to produce food that would be good for a restaurant, not a fast food outlet," explained Natasha. "So the fajitas and the soup was all rushed and it wasn't very hot". Wasn't she worried when Lord Sugar turned up to dine at Caracas? "It was a weird situation as I'd only been face to face with him in the boardroom. I took his order and took the opportunity to upsell nachos to him. Which I think he quite liked actually". But were they cold? "Hopefully they weren't!" she laughed.

"If I was the Project Manager on the food task I would definitely have grabbed it," continued the lady with the fateful degree in Hospitality. "I would definitely have applied my knowledge. We needed to have a strategy on profit margins and also the customer service flow – we had none of that". It also didn't help that Lord sugar later compared their produce to what his son's dog had once regurgitated!

Moving swiftly on from spewing to blowing… and that immortal question frequently posed during Natasha's stint as editor of 'Covered' on the Magazine task. "The phrase "How do you blow your load?" was put forward by Leon, which I rubber-stamped," the fitness fanatic revealed. "With regards to the lads' magazine, I actually thought it was quite fitting. It meant 'how do you spend your cash?' So it had a bit of a shock factor, but I think that made the magazine stand out from the crowd."

It's fair to say that Natasha and Susan weren't always singing from the same hymn sheet – or even in the same choir judging by the growing friction on the tasks. Natasha put the record straight on the skincare expert: "I actually have a really positive view on Susan. At the age of 21 she has achieved an enormous lot and as an individual I actually like her. In terms of what she brings to The Apprentice, I do think that she's at the forefront of good ideas, she's a driver and has fantastic sales ability."

Now folks – prepare yourself for a bombshell. "In the Paris task when Tom deployed the Paper Scissors Stone method… it was actually my idea!" giggled Natasha. "So I have to take responsibility for that. It was just a lighthearted way of making a decision, but in retrospect it was quite a significant decision to be made. It was a way of making things a bit more enjoyable for us… [but] it probably wasn't the right way to do things."

Finally, what was the biggest lesson Natasha learnt during her time on The Apprentice? "There were a number of lessons," she replied. "The one that stands out most in my mind is not to say 'yeah' all the time! In terms of me as a businessperson, I think that I've learnt that it's okay to be softer. So I don’t have to be so direct, don't have to be so forceful. I also have the ability to have a creative mind and implement things in that context as well."

Watch Natasha discuss being fined by Lord Sugar, late nights in the Apprentice house and more on her use of the word 'yeah' in our interview video:


What did you think about Natasha's efforts on The Apprentice? Could she persuade you to buy extra nachos like she did with Lord Sugar?