"Don't tell me the sky's the limit if there are footprints on the moon". Those words heralded the arrival of Melody on The Apprentice - and for a long while her star was in the ascendancy. Alas, a fateful trip to a pound shop and several nodding dogs proved to be her downfall as Lord Sugar fired the candidate "with regret" at the end of the Flip It task. The Apprentice Insider caught up with Melody to retrace those footprints… 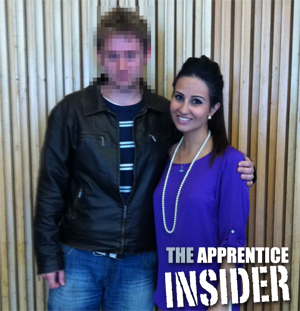 "I love that quote," she declared. "It speaks to me. I think that's what quotes are there to do – inspire you. And it inspires me. We all thought that you couldn't walk on the moon – but that person did. It's that message that anything is impossible and don't allow yourself to be bound by the everyday limits that we place on ourselves". Melody was also impressed by the Apprentice Insider's quest to upgrade the quote, particularly Catherine Lawler's: "Don't tell me Infinity's the limit when Buzz Lightyear went beyond."

A limit was placed on the number of a certain canine toy in Melody's doomed second stint as Project Manager. "I think what went wrong with the task was that we perhaps didn't reinvest in what was selling  - for example, the nodding dogs. I just don't ever want to see another nodding dog in my life again! If I could just go back, and I wish I could, I would have from the very beginning not gone after retailers - that was a waste of time - and instead gone and sold to the public where the margins are."

By contrast, Melody's first outing as PM was a resounding success. But wasn't it a huge gamble to stand as team leader in the opening task? "You know when you have a conversation in your mind? I was thinking 'Melody, what are you doing? This is like the greatest risk in the competition'. I don't know what came over me. I suppose I always jump into things and I don't like to become complacent and go into the background. So I did it and won, but honestly that's the scariest thing I've ever done."

The tense boardroom environment was another test of the nerves, and not helped by Lord Sugar's uncertainty over Melody's vocation. "I'm a social entrepreneur," she explained. "You take a good cause for the community and you couple it with a robust business model."

One skill that might not be top of Melody's CV is her stunning feline impersonation. Just where did that "Meeeoooouuuu" come from in the App Task? "Meeeoooouuu! Haha, when I did it I was like 'oh my goodness, I'm about to miaow on national television'. It's just incredible, but you do what you gotta do to win the task and it's good fun. Sometimes you've just gotta laugh at yourself". The team's PM certainly caused much mirth with her Earl's Court pitch in those gloves. "Edna is a strong speaker," purred Melody. "You can't deny her that. The only thing is that the style of delivery was mismatched to the audience." 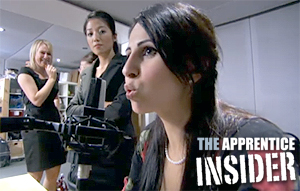 The Biscuit Task unleashed a new word into the global domain. Popsquit. "That name was Tom's," revealed Melody about her creation. "I would never call anything Popsquit! Popsquit? What is that?" Well, a lot of the show's fans felt it sounded like some kind of stomach ailment. Melody, who clarified that the Swansea focus group only observed an uncooked prototype, feels that the product could go far – with a new name of course! "I'm still waiting for an email from someone in the biscuit industry to tell me that they want to pick it up!"

Time will tell if Melody's inbox is flooded by offers, but one thing she can take away from her experience on The Apprentice is what can be achieved in just one day: "In the space of a few hours you can come up with concepts, you can create branding, you can create pitches, you can close sales. It's just incredible. That's definitely a message that I'll be taking to the young people I work with and train."

Watch more from our interview with Melody:


What were your highlights of Melody's time on The Apprentice? Would you buy a rebranded Popsquit? Let us know by clicking on the Comments button above...