The educational powers of The Apprentice came to the fore during the Fast Food task. "Columbus is British... and Caracas is Mexican? - lack of common geography and history knowledge," blasted Rosie Bortoluzzi on the Facebook fan page. It could have been worse. At least Tom didn't think a British detective called Columbo discovered America… 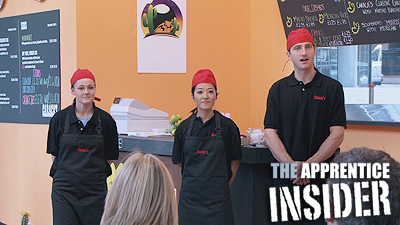 Mr Notepad Calculator and Helen's culinary concept was described as "either utter madness or complete genius" by the former, but it captured many an appetite. "Pure madness, but it worked", felt Ruth Saele. "I would definitely buy a MyPy... and probably a Columbus one just for the pure irony," tweeted MerriamUK, with former candidate Liz_Locke adding: "Love MYPY, great brand and flawless process throughout". What would the reaction have been if Tom had added an Emergency Pie to the menu? Or even a Piesquit – Half Biscuit, Half Pie, All Gravy Encrusted?

The Twittersphere was full of suggestions for the proposed franchise. "I don't know about Byron ...what about Pyron??" pondered MrPeterStott. "MyPy slogan should've been "I spy with my little pie something 100% British" suggested susannaclark7. A rival franchise was even mooted by Nathan_Jones_: "My Pi… where everything costs £3.14."

Decimal places were the bane of Macho Nacho PM Jim over on the beleaguered rival team and their Mexican food outlet. "I hope Jim becomes my bank manager. I'd be loaded!" laughed Tezarozaboza. "No business plan - no costings - what a fiasco," slammed Anne-Marie Marshall. After the previous task in which Nick Hewer confessed his fondness for the "Irish bulldozer of charm", do you think his stock has taken an irreversible tumble? Richard David Evan Thomas thought so, saying he'd "had enough of his chilli con blarney!"

It was a case of "chilli con carnage" in the boardroom according to sarahsadsocks, as Jim, Natasha and Susan downed their sombreros to desperately fight for survival. "It never bodes well when the candidates have an 'expert' in the team!" surmised emsy_louise, referring to Natasha's four years studying Hospitality at university. That proved to be the candidate's downfall, with sambha25 offering a "great big mexican wave bye bye, natasha!" and Pat Joyce adding "she seemed to have no interest in the task & even withheld a valuable skillset."

On the positive side, at least Natasha persuaded Lord Sugar to order those extra nachos. That accolade surely deserves a place in her CV… just above that fateful BA Hons in Hospitality. I'll leave you with a razor sharp comment from LauzTheGeek to round off the penultimate Debrief of the series…

"Anyone order a final 4?". No Jim, we're still waiting for our fajitas…"

How tasty did you find the Fast Food task? Which restaurant would you have visited and who would you have fired? Click on the Comments button above to have your say.