In the words of Nick Hewer - woof woof! The Flip It task had followers of @bbcapprentice and the show's Facebook fan page barking mad at some of the decisions that were made and howling with laughter on many occasions. At the end though, the identity of The Final Five was known after losing Project Manager Melody was fired. 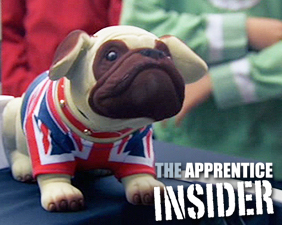 "Goodbye Melody" trended worldwide on Twitter, although you’d be wrong for thinking it was all a sweet farewell to the candidate fired "with regret" by Lord Sugar. "Melody had to go, she had become little more than a walking Self Help Manual," stated Peter_Boland. "25 watches in a pound shop… taxi for Melody" reasoned Jeff Franklin. "Nodding faster than the #noddingdogs with @Lord_Sugar's decision," said WinSanPang.

Melody also had her passionate supporters. BrownSpeaks cried: "Noooo! I was rooting for Melody! She's one of those fighters who will go far and get what they want", while Eleanor Segall wrote that she was "sad that melody left, i think she's a very bright woman who has a lot of potential!" LauraWest2 slammed that it was "a shocking decision to fire melody, what has tom done for the past 3 weeks? Nothing!"

Well, Tom has managed to sell three toy bulldogs and pick up a new nickname from Lord Sugar – The Nodding Hindsight Man. "Tom getting out-haggled by a 5 year old? His technique seems a little 'ruff' #apprenticedogpun" observed quizlacey. "Where can I buy a Nodding Tom?" wondered paulwoolfson.

"Helen has lost her 1st task on this year's @bbcapprentice. She is human afterall!" tweeted a stunned davidsimpson88. A huge talking point was the candidate's attempt to take over as PM from Melody earlier in the task. "You have to admire her ambition," wrote Kirstin Bailey. "She should have ripped the reins out of Melody's hands, as she has not got a clue…" stated Benson Richard Hunter. In response, davetaylorsharp felt "Melody handled that very well. Her training from the Dali Lama came in handy there!"

One candidate's untimely kip in the back of a cab led joehedges87 to suggest: "So should Susan be called Snoozan now?" The roars of acclaim that greeted Lord Sugar's decision to cancel the winning team's treat would have been enough to wake her up. "Fantastic move! They didn't deserve it! Highlight of the series so far" exclaimed mc_siobhan. "Classic! You tell em Lord Sugar! :D" squealed Jacey Jay in delight. Lord_Sugar himself clarified: "I am still angry they could have really cleaned up if they re invested. So no treat."

As far as Jim's online fortunes go, he did indeed swallow that blarney stone,as it wasn't just Nick Hewer who reassessed his charms. "Didn't like him at first but love his cheekiness now!!" purred jessgrabba. "Jim should have gone on treat; on his own!" exclaimed Emma Velma Gould. Former candidate KateWalsh5 also tweeted her admiration: "Loving Jim's work this week on @bbcapprentice v impressive salesman."

We'll leave you with the words of 93rdminute, who mused: "There is some bloke out there with 1000 nodding dogs in his shed screaming at the tv."