"Knowing Lucky Fish was trending worldwide on Twitter is incredible, because I actually did think it had legs - certainly no pun intended there!" There's no doubt that Leon left his mark on The Apprentice and its fans, although his critical failure to create an impression in the Paris task proved to be his downfall. We caught up with the self-proclaimed 'Leon-trepreneur' to chat about his time on The Apprentice… 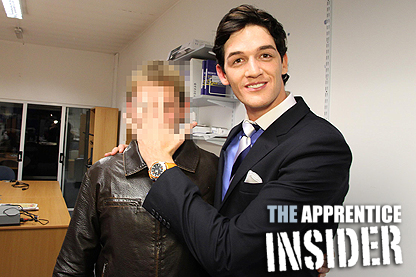 "It clearly went wrong with the products that we chose," Leon stated about the doomed attempts to sell cress and teapots to the French. "Had we taken the rucksack to the pitch we'd have been up a quarter of a million quid". What about the market research he was tasked with alongside Melody that led to the rucksack rejection? "It felt somewhat biased – we were in a tube station casting the research. Had we ventured onto the street it may have given a different outcome."

Leon, who described his time on the show as "brilliant", said that he felt "Melody had pretty much the whole task under her control. It was irrelevant whether we had Tom as the Project Manager – Melody was running the show". He also joked about who he felt should have been fired instead of him: "I think Natasha yeah, perhaps, yeah, needed to go, yeah, in that specific task. Yeah."

The non-French speaking candidate wasn't a Yeah Man when it came to Glenn's product idea in the pet food task. Leon unsuccessfully plumped for his own suggestion of Lucky Fish – "a concept that I dreamt up out of the focus group and I really did think it could take over. But Glenn put his foot down and came up with Catsize."

Glenn also invented Slangatang, the app that propelled Team Logic to a second successive defeat under the guidance of Project Manager Leon. Nonetheless, the experience was one of his highlights: "Watching them go live on the internet was incredible – and running around Earls Court dressed as a leprechaun, or whatever it was that I was dressed up as, was hilarious for me."

"I think I've still got strong views on wearing man make-up," said Leon, referring to his meterosexual experiences on the Beauty Treatments task. "I don't think that's ever going to be for me. With regards to the spray tan, it's no big deal. I think I was just worried about how I would look on TV". On the subject of orange glows, Vincent was Leon's roommate inside the Apprentice house from the start. "We got on really well throughout until he left," he revealed.

Leon signed off with the following farewell, which showed just how much of a learning curve The Apprentice has been – especially in linguistic terms: "As you know Ben, je ne parle pas français, so it's au revoir from me!