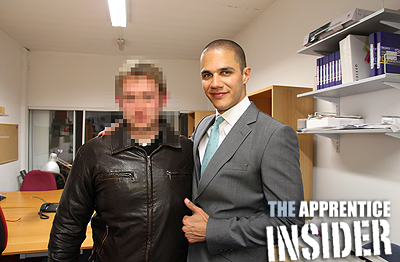 The Apprentice Insider 'engineered' a meeting with Glenn after the Magazine task and his vocational background proved to be his downfall. Upbeat about his time on the show, the Slangatang and CatSize creator chatted to us about his experiences…

"I feel that I can grow from it," the engineer said of the decision to fire him ahead of 'Bambi' Susan and Project Manager 'Jedi' Jim. "Lord Sugar sat there and he gave a reason for each one of us why should have been fired. Any one of them could have gone – they failed on the task as much as I did. But I just didn't fight hard enough."

"In the boardroom, fortunately it doesn't get personal," stated Glenn, who was accused of being cowardly by Jim. "With that in mind, you can be ruthless and cutthroat and know that it doesn't get taken out of there. Ultimately, your conscience has to go out the window and you have to fight for your life… you have to dig up the pettiest detail in order to defend yourself. That's the way it goes. This is The Apprentice. You gotta fight!"

The choice of Hip Replacement as the magazine's title hardly did the team any favours, but Glenn explained what led to the decision: "What we took from the focus group, in terms of the name, was that they wanted something less clichéd and more quirky. It led us down, unfortunately, a bit of a red herring wrong path – and towards Hip Replacement. I think we probably should have gone with something a little bit more generic but with a bit of a hint. A play on words like 'Free 60' or 'New Age' that wasn't so in your face."

It could have been even worse if another morbid suggestion from Zoe had been approved! "Well, Coffin Dodger from Zoe was as bad as Old Boot from me!" claimed Glenn. "We were all throwing those ridiculous names in because we got so carried away with the whole concept of doing something different. We tried our very best not to be insulting. We wanted to sell the magazine. The editorial content I thought was very good in all honesty – it was just the layout and the name that let us down… and obviously the pitch."

How did Glenn feel about winning the pet food task, especially as his colleagues failed to see the light in CatSize? "It felt like a bit of a Pyrrhic victory because I had to go against my entire team to push that through. That's something I really didn't want to do. No one wants to fight against all those who are trying to back you. It's a shame it didn't work out a better way. I can blame myself to some extent because I was quite forceful in getting the idea through… and the way in which I disregarded all their work was quite insulting to them and I can only apologise for that. But ultimately coming out and winning it – it was a good feeling."

Glenn also offered a heartwarming insight into the domestic harmony that surrounded the candidates away from the hard fought tasks: "One of my favourite times in the house was when we all got together and watched TV. It was almost like we could all forget the process we were involved in and be a group of friends together just having a good time. We all became normal human beings again and the beasts in the process were all pushed away!"

Finally, he let us in on the biggest lesson he has learnt about himself from the show: "I'm thoroughly enthused about everything I do and throw myself into it, but sometimes it can come across as either arrogant or overwhelming. I saw that in myself and one thing I can learn about it is to take a step back sometimes and don't shove my ideas in other people's faces – and listen more."

What did you think about Lord Sugar's decision to fire Glenn? What were your highlights from his time on the show?