Bloody hell. You can understand Lord Sugar's choice of words upon seeing the results of the Biscuit Task, as the seemingly unstoppable Helen and her team Venture destroyed their opponents. Fittingly for an outfit pushing a Snap 'n' Share product, there was plenty of snapping on Zoe's team Venture. It all culminated in the Project Manager leaving in a taxi - which she fortunately did not have to share. But would you have fired her? 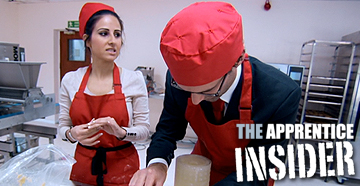 In a parallel universe, Zoe might have plumped for the upshot of Tom's cunning plan to "push the boundaries in creating something unique" – the 'Emercrunchy' biscuit! A treat designed "to be eaten in an emergency", the product would been better material for amorous pitches to supermarkets than Bix Mix. Just imagine how it would have unfolded before Nick Hewer's twitching eyebrows…

Melody: Hey sweetie, how are you?

Tom: Great thanks, but what's this I smell? Is it gas?

Melody: That's right sugarplums – there has been a gas leak.  But I don't know what to do!

Tom: This is really serious!

Melody: I know. (cough) I think I'm going to pass out. (splutter)

Tom: Well… (strokes his chin) I think it's time to crack open The Emercrunchy! Where are they cuteypie?

Zoe: (stepping into view) Actually, they're in the hands of Team Logic and these pimped up digestives can be yours right now for just £1.99!

Tom and Melody: (in unison) Woohoo!

Who would possibly turn that down? Other intriguing biscuit ideas included Helen's 'Men That Munch', which even Natasha of 'how to blow your load' fame deemed to be "a bit rude", and Melody's 'Popscuit'. This hybrid concoction of popcorn and biscuit failed to impress the focus group though. Just as well, as the next logical step in that line of products would be the 'Gumscuit' – a chewable biscuit that would be the scourge of pavements across the globe. Which one of the proposed biscuits would you most like to be crunching on?

Jim's ambitious pitch for Special Stars propelled Venture into the ascendancy, securing a whopping 800,000 orders in return for exclusivity. The "Irish bulldozer of charm" stopped just short of projecting a hologram of David Beckham mid pitch, in which the footballer professes to wholeheartedly endorse the brand. Presumably a large delivery of Special Stars will soon be dumped in the front garden of Number 73 in return for the Rubbish Task snubbing of the alleged Jedi.

It was to be Zoe who was fired for the critical mistake of not attending the biscuit development, something she initially wanted to do until Melody and Susan persuaded her otherwise. At least she can look forward to a new career path – in acting. For not even Kate Winslet could have summoned up the amount of thespian prowess required to act all pally with Melody in the 'girly night in' roleplay moments after their epic fall out in the supermarket aisle. Today The Apprentice. Tomorrow The Academy Awards.

What are your thoughts on the Biscuit Task and the staggering result? Let us know by clicking on the Comments button above.