'Allo Allo! A spot of Franglais to kick off the latest assembly of your @bbcapprentice tweets and Facebook fan page comments is mandatory given the mirth generated by candidates' linguistic skills in Paris. As Mark_Kerr tweeted during Jim's pitching attempts: "[He's] doing what we would all do in this situation. If they don't understand, repeat, slowly, in english, in a french accent". There was no need for Lord Sugar to repeat anything though, as his message to Leon was loud and clear – you're fired! 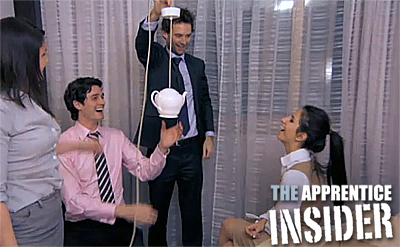 When the task results were announced, many felt Tom and his notepad were heading for the door. "£228,000 compared to £11,000?! I can't help but think a certain project manager is going home today," predicted SteveFenwick. Wrong! "So glad he saved Tom! He's got such potential, he just needs confidence!! #teamtom" beamed mavz01. "Oh Tom, you're adorable but also incredibly lucky. Should have been you - but I'm glad it wasn't," mused TheLeafyOne.

"Not sure why 'Poor Tom' is trending - he's weak & should have gone! If anything it should be 'Poor (beautiful) Leon", blasted MynameisElie in praise of the man who is probably still trying to figure out the French for entrepreneur. As your very own bbcapprentice tweeted: "No prizes for guessing Leon's fave Girls Aloud song - Can't Speak French! He should let the little finger do the talking..."

The sound of the underground is what Melody heard while undertaking her market research. Valerie Elliot observed: "Why is anyone surprised that if you ask people at a Metro station whether car seats are something they'd use everyone says no". Kevin Liversage added: "Melody basically sabotaged Tom with her petulant attitude - notice the leading questions she was asking at the train station?" On the other hand, Qasim Habshi was full of praise: "She sold brilliantly and has good business acumen, additionally her hunger excels..."

One candidate's continued winning streak has propelled her from obscurity to acclaim in recent weeks. Spicerjames said: "You knew Tom would lose from the start when @Lord_Sugar moved Helen off his team. She wins every single time". SZKev added: "8 out of 8 for Helen - pretty unstoppable". Helen's selling skills were widely admired, although the same cannot be said for everyone, yeah. Former candidate Liz_Locke was stunned: "Natasha you are so bad at pitching!!! Tom why would you say you would accept 10 units.......appalling!"

It wasn't just Karren Brady left gobsmacked by winning Project Manager Susan's questions about the French and their love for children and cars. Konnolsky mockingly tweeted: "Susan: 'Do the French breathe oxygen or what?" Similarly, Tom's jawdropping shenanigans before a vital pitch led Leonie Bryant to joke: "I think paper, scissors, stone is an underrated business tool, think I will try it out tomorrow..."

The night ended with Poor Tom, Outstanding Asian and Paper Scissors Stone all trending Worldwide. That's what you call The Apprentice Effect...