Inside the Olympic bubble at training camp

I'm writing this from Breisach am Rhein, the venue for our training camp in Germany. Breisach is where the women and lightweights come every year for our final work camp before the World Championships or Olympic Games - and when I say 'work camp' it truly lives up to its name through a familiar cocktail of weights, ergos and rowing.

We'll put in some serious volume as we build the engine to take us down the track at Dorney in about three weeks' time. Katie Greves worked out that we will have trained for something like 25 hours per Olympiad for every stroke we row in our Olympic final, and many of those hours will have been put in here, on the Rhine, in the steaming hot 'California of Germany', as the town mayor likes to call it (the resemblance based on it being a wine-producing region).

Throughout this final countdown, our focus narrows down to the absolute essentials of what is needed to produce our best race over 2000m on one day in August: and right now that's boat, team-mates, stopwatch, sugary carbohydrates, and sleep. Countries could invade each other, governments may rise and fall, the Higgs-Boson particle could turn up on Polzeath Beach for all I care - if it's not going to make my boat go faster, it's not relevant.

This is not to say I don't care about the outside world, but more to point out that as athletes we have a very small window of opportunity to get it right. We have one shot and if we mess it up there's no second chance, which means I can't afford to do anything other than keep my eye completely focused on the ball (or perhaps the oar) at the moment. During this time in 2008 there was a global banking crisis, with Lehman Brothers going bankrupt the month after the Olympics: was I aware of it at the time? No. I was training for Beijing. 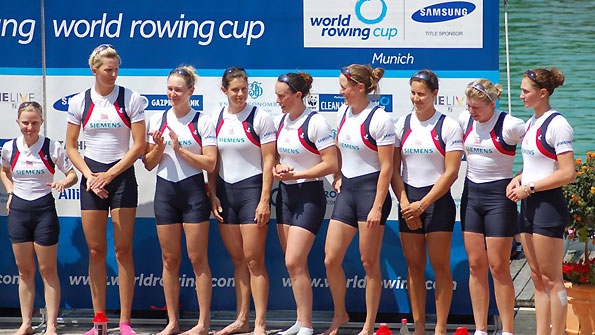 The Olympic women's eight crew was put together during the World Cup season. Photo: Katie James

It's consequently an incredibly energising and exciting time. The reason we get out of bed and go training every day for four years is to give us the opportunity to produce the performance of our lives at the Olympic Games; and finally, the stage is in sight.

There's no planning for next year, or talk about when the squad will re-commence for training for next season, or discussion about building over the Olympiad: the talking's over. You wanted to be an Olympic rower? Here's your chance. You want to finally do what you've been dreaming about for four years? Off you go. We'll have one day, one race, one chance, to do or die. And that is a pretty thrilling prospect.

The key to the Olympics is that it draws together all sports from all countries, and there are not any other occupations that could say that. One of my brothers is a pretty good journalist, but he would never be able to go to a journalists' competition to test himself against other journalists, from every country in the world from Norway to Niger, Fiji to France. But for us as athletes, we do. Being an Olympian means exactly the same thing to every athlete, from every sport, from every country.

This period has also presented some new challenges to me because it's my first season racing in the women's eight. The eight is a very unique boat because it's the biggest and the heaviest boat, so although it takes a while to get it up to speed, when it gets there it goes like a juggernaut. Rowing in an eight is a bit like being in an arranged marriage with eight other women: we haven't chosen each other, have ended up together through circumstance, but we've got to make it work for sake of the kids (or in our case, for the sake of the Olympic medals which will be handed out in 20-odd days' time).

It's been a hugely exciting learning experience for me and it certainly has kept things interesting. Our next stage is to translate all the work we've done out here into speed at race pace, and really test out what we've created to see how much speed we can eke out over 2000m.

Hi, I'm Annabel Vernon, Olympic rowing silver medallist and proud Cornishwoman. I'll be writing about some of the ups and downs of life in the fast lane of Britain's most successful Olympic sport as I journey down the road to London 2012.

You can stay up to date with Annabel Vernon via these feeds.