Lewis Hamilton’s victory in the Italian Grand Prix was his second in three races and McLaren’s third in a row, confirming their position as the form team in Formula 1.

They have won nearly twice as many races as any other team this season – their five compare with the three of Ferrari and Red Bull. No-one else has won more than one.

Just as worryingly for their rivals, the last two victories – Hamilton’s on Sunday and Jenson Button’s in Belgium seven days previously – were utterly dominant.

The retirement of Red Bull’s Sebastian Vettel with his second alternator failure in a race this season also helped Hamilton move into second place in the championship. 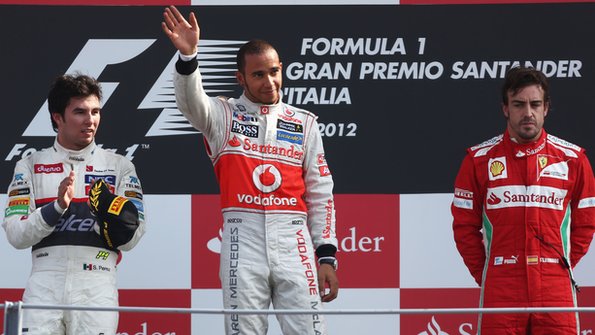 The 27-year-old may be 37 points behind Ferrari’s Fernando Alonso, but there are 175 still available in the remaining seven races.

Alonso is, by common consent, the stand-out driver of 2012, but Hamilton has also driven a superb season and has almost certainly been second best.

Had it not been for a number of operational problems early in the championship, he may well be leading the championship. Even as it is, he has every chance of making a fight of it to the end of the season.

For a man in such a position, after a strong weekend, Hamilton was in a subdued mood after the race, as indeed he was throughout the four days in Monza.

He insisted that the BBC Sport story in which Eddie Jordan said that Hamilton was on the verge of leaving McLaren and signing for Mercedes had not affected him, but it did not look that way.

Whatever was prompting him to keep his answers short and to the point in his news conferences and television interviews certainly did not affect his driving.

He was in excellent form throughout the three days, tussling with Alonso for the honour of being fastest man at Monza.

And once the Spaniard was put out of the reckoning for victory with a rear anti-roll bar problem that left him in 10th place on the grid, Hamilton always looked odds-on for victory.

His task was made easier when Ferrari’s Felipe Massa beat Button away from the grid and held on to second place, with the McLaren never really hustling as it might have been expected to do, until he made his pit stop on lap 19. By then, Hamilton had the race won.

There was no evidence Button would have been able to challenge his team-mate had he got away in second place.

Button did close a little a few laps after their pit stops, but it was clear Hamilton was measuring his pace, and he let Button get no closer than seven seconds before holding him there until the second McLaren retired with a fuel system problem.

It was a mature, controlled drive, just as were his victories in Canada and Hungary. Alonso, who rates him as his toughest rival, will take the threat from him in the championship very seriously.

All in all, it was a tense weekend at McLaren. The Hamilton/Mercedes story made it a difficult weekend for the team and the relationship between their two drivers is frosty, presumably following Hamilton’s decision to post a picture of confidential team telemetry on the social networking site Twitter on the morning of the Belgian Grand Prix.

Button said he was “surprised and disappointed” by his team-mate’s actions, for which read “seriously hacked off”.

“I didn’t concentrate on it too much,” Button said on his arrival at Monza. “I thought it was important to say how I felt. It’s very easy not to say anything; also if you say something you can clear it up quicker. That was the last race. We’ve moved on from that.”

Perhaps, but the body language between the two men was palpably cool throughout the weekend, and they were not troubling to hide it, even in public arenas such as the restaurant at their hotel.

One night, sitting at adjacent tables, they did not even look at or acknowledge each other, let alone exchange a word.

McLaren insiders were relaxed about the situation, though. They like their drivers to race and a bit of edge focuses their minds, one senior figure pointed out.

Hamilton admitted his victory would have been a lot harder had Alonso qualified on the front row, as he looked certain to do before his problem in qualifying.

As it was, Alonso was forced to salvage what he could from 10th on the grid and, typically, he made the most of the situation.

An aggressive and clinical first few laps go him into fifth place by lap seven, but there his progress halted against the back of Sebastian Vettel’s Red Bull.

The world champion was robust in his defence, and Alonso was not able to pass before they made their pit stops together on lap 20.

Ferrari’s slick pit work, consistently among the best this season, almost got him out ahead of Vettel, but the Red Bull edged ahead, forcing Alonso to get past on the track.

When he went for the big move, around the outside of Curva Grande at 180mph on lap 26, Vettel unceremoniously barged him on to the grass, the Ferrari bucking scarily as Alonso wrestled for control.

Understandably, he was furious, although he kept his counsel after the race. It was a sure-fire penalty, in the context of a clarification on acceptable driving which was issued verbally to the drivers at the Spanish Grand Prix and then in written form in Canada.

The assumption was that Vettel was getting Alonso back for a similar situation, with roles reversed, in last year’s Italian Grand Prix. That one, in which Vettel passed Alonso with two wheels on the grass, has rankled with the German ever since.

He has brought it up at every opportunity, and this looked very much like revenge.

The difference was that, then, Alonso left Vettel just enough room, and Vettel took to the grass when he could – just – have stayed on the track. This time, Vettel left no room, and his behaviour was clearly unacceptable.

Vettel has the arrogance and self-belief that is required of all great drivers but there is also sometimes a sense of entitlement about him which is less than appealing.

He got this one wrong, and one hopes that when he watches a video of the incident, he will recognise that himself.