Lewis Hamilton cut a remarkably phlegmatic figure after the Singapore Grand Prix, considering his retirement from what seemed a victory for the taking left his championship hopes in tatters.

The McLaren driver said all the right things after the race about not giving up, but the sad reality is that he is 52 points behind Ferrari's Fernando Alonso with only 150 still available.

To expect Hamilton to be able to make up more than a third of the points still remaining on a man who is driving one of the best seasons in Formula 1 history is ambitious in the extreme, although it's certainly going to be entertaining watching him try.

Hamilton's performance in Singapore confirmed two things about this season - McLaren are the team to beat with the consistently fastest car and the 2008 world champion is driving superlatively well. 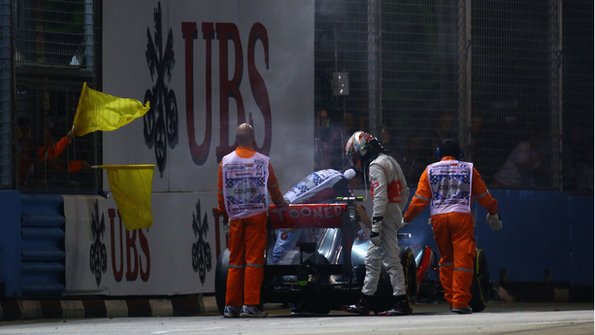 His pole lap on Saturday was a sight to behold, all controlled aggression and commitment, brushing the walls, judging the balance between risk and reward to perfection to leave his rivals breathless.

Until that point, Red Bull's Sebastian Vettel had appeared to be evenly matched with Hamilton but when it mattered the German found his car's grip had mysteriously disappeared. Hamilton found plenty, though, to go more than half a second clear of anyone else.

It was, as McLaren sporting director Sam Michael put it, a "fantastic" lap and he followed it with a controlled performance in the race, taking only as much as he needed to out of the car and tyres, confident that he had pace in reserve if Vettel upped his pace behind him.

But then the oil started leaking out of his differential, he lost his seamless gearshifts, then third gear and finally all his gears, and he sadly coasted to a halt at Turn Five with more than half the race still remaining.

It was the latest in a series of disappointments for Hamilton this year, without which he would be right up with Alonso in the championship.

For nearly all of them he has been blameless. Only in his collision with Pastor Maldonado in Valencia could you perhaps lay any small fault at his door - of course the Williams man drove into him, but ex-drivers, including Ivan Capelli, have questioned whether Hamilton might have been wiser in the circumstances to leave him a bit more space.

Despite the series of McLaren-related incidents that have cost him his best chance of the title since 2008, Hamilton's mood upon getting back to the paddock was notably different from his subdued bearing after taking pole and victory in Italy two weeks ago.

In Monza, he was downbeat, almost monosyllabic, despite his crushing performance. Here, the speed was the same, but the disposition far sunnier.

It remains to be seen whether that was to do with him making up his mind about his future one way or the other.

But it would take a brave man who gave up the pace of the McLaren for the uncertain and unimpressive form of Mercedes, whatever the difference in remuneration, real or potential, there may be between the offers.

"I think it would have been a nice result for us but we still have more races to go," he said.

"We really couldn't afford today but it is what it is. The good thing is we have good pace. I have to go and win the next races."

On his and McLaren's current form, he could easily win all of them, but if the season continues in its topsy-turvy way, with wins shared about, it is difficult to see him making up so many points on Alonso.

Vettel, though, is a different matter. The low-downforce circuits of Spa and Monza behind them, the Red Bull is likely to be competitive everywhere.

Even if it is not as strong as the McLaren, it is certainly consistently quicker than the Ferrari and in that context a 29-point deficit following the victory he inherited from Hamilton in Singapore is eminently bridgeable.

As Red Bull team boss Christian Horner pointed out, Vettel "was 25 points down with two races to go in 2010, which indicates anything is possible for all the drivers. We need to keep taking points off Fernando, which ideally means getting a few more cars between us and him."

And there's the rub.

Alonso has not won since Germany in July. A potential win escaped him in Italy two weeks ago because of a mechanical problem in qualifying, but Ferrari's poor performance in Singapore, when he had been expecting to fight for pole and victory, was a wake-up call.

On the form of this weekend, Alonso does not look likely to win in normal circumstances unless Ferrari can bring some more speed to the car.

But what he does keep doing is finishing in the points.
In the 10 races since the Spanish Grand Prix in May, Alonso has retired only once - after being hit by the flying Lotus of Romain Grosjean in Belgium three weeks ago. Of the nine he has finished, seven of them resulted in a podium - including two wins - and the other two fifth places.

No-one else has consistency anything like that, and it is in that consistency that lies his best hope.

The concern for Alonso is that if both McLarens and Vettel finish races, those podiums will be hard to come by, and in those circumstances that gap would come down quickly indeed.

So well has he been driving this year that Alonso has to still be considered a narrow favourite for the title.

But while McLaren's weaknesses have made the championship a long-shot even for Hamilton, as Alonso leaves Singapore, he will be casting worried glances over his shoulder at Vettel.