Lewis Hamilton's move to Mercedes is the biggest development in the Formula 1 driver market for three years.

Ahead of the 2010 season, Fernando Alonso moved to Ferrari, world champion Jenson Button switched from world champions Brawn (soon to become Mercedes) to McLaren and Michael Schumacher came out of retirement to replace Button.

Now, the man who most consider to be the fastest driver in the world has taken a huge gamble by switching from McLaren, who have the best car this year and have won five races this season alone, to Mercedes, who have won one race in three years.

To make way for Hamilton, Mercedes have ditched the most successful racing driver of all time.

Schumacher's return at the wheel of a Mercedes 'Silver Arrow' was billed as a dream for all concerned, but with one podium finish in three years the German marque have abandoned the project. 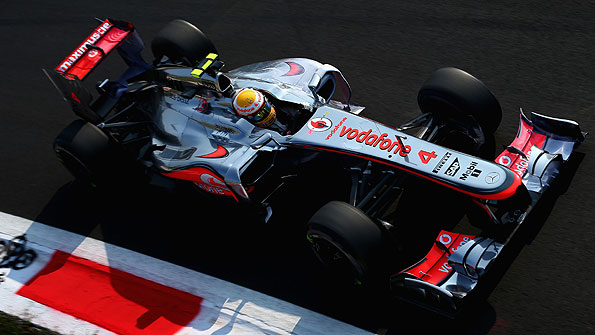 Hamilton leaves a team that has won more races in the last 30 years than anyone else. Photo: Getty

That the announcement was made just five days after the latest in a series of collisions in which Schumacher rammed into the back of another driver after misjudging his closing speed simply rubs salt into the wound.

Hamilton will be replaced at McLaren by one of F1's most promising rising stars - Sauber's Mexican driver Sergio Perez, who has taken three excellent podium finishes this year.

That's quite a shake-up, and it raises any number of fascinating questions, the first and most obvious of which is why Hamilton would leave a team that has won more races in the last 30 years than anyone else - even Ferrari - for one that has won one in the last three.

The explanation for that lies both at his new and current teams.

Mercedes sold the drive to Hamilton on the basis that they were in the best position to deliver him long-term success. In this, there are echoes of Schumacher's move to Ferrari in 1996.

Back then, the Italian team were in the doldrums, having won just one race the previous year. But Schumacher fancied a project, and saw potential. It took time, but by 1997 he was competing for the title, and from 2000 he won five in a row.

The architect of that success was Ross Brawn, then Ferrari's technical director and now Mercedes' team boss. Brawn is one of the most respected figures in F1, and Hamilton is banking on him being able to transform Mercedes in the same way as he did Ferrari.

Undoubtedly, Brawn will have made a convincing case to Hamilton; he is a very persuasive and credible man. It is also worth pointing out that Mercedes - in their former guise of Brawn - have won the world title more recently than McLaren. Button succeeded Hamilton as world champion in 2009.

Mercedes believe that the new regulations for 2014, when both the cars and engines will be significantly changed, will play into their hands.

They are devoting a lot of resources towards that year, and are optimistic they will be in good shape - just as Brawn were, in fact, when the last big rule change happened for 2009.

And Mercedes have a technical team that, on paper, is immensely strong. In Bob Bell, Aldo Costa and Geoff Willis, they have three men who have been technical directors in their own right at other top teams all working under Brawn.

Part of this argument is predicated on the fact that new engine regulations always favour teams run or directly supported by engine manufacturers, on the basis that they are best placed to benefit from developments, and to integrate the car with the engine.

But this is where that argument falls down a little - McLaren may be a mere 'customer' of Mercedes for the first time next year, but they are still going to be using Mercedes engines in 2014, and on the basis of parity of performance.

The love affair with McLaren, who took him on as a 13-year-old karting prodigy, ended some time ago.

Since 2010, Hamilton has been complaining from time to time about the McLaren's lack of aerodynamic downforce compared to the best car of the time.

Through 2009-11, he grew increasingly frustrated at his team's apparent inability to challenge Red Bull. Hamilton is well aware of how good he is, and it hurt to watch Sebastian Vettel win two titles on the trot and not be able to challenge him.

That explains his ill-advised - and dangerously public - approach to Red Bull team boss Christian Horner at the 2011 Canadian Grand Prix.

This year, McLaren started the season with the fastest car for the first time since, arguably, 2005. But again they could not get out of their own way.

Pit-stop blunders affected Hamilton's races in Malaysia and China early in the season, and then a terrible mistake in not putting enough fuel in Hamilton's car in qualifying in Spain turned an almost certain win into a battle for minor points.

These errors badly affected his title charge and in early summer his management started approaching other teams.

His favoured choice was almost certainly Red Bull, but they weren't interested. They also approached Ferrari, where Alonso vetoed Hamilton. That left Mercedes.

It is ironic that his decision to move teams has been announced on the back of four races that McLaren have dominated.

Meanwhile, Hamilton's relationship with McLaren Group chairman Ron Dennis, the man who signed him up and who promoted him to the F1 team in 2007, has collapsed.

It was noticeable that after Hamilton's win in Italy earlier this month Dennis stood, arms-folded and stoney-faced, beneath the podium, not applauding once. Nor did Dennis don one of McLaren's 'rocket-red' victory T-shirts, or join in the champagne celebrations with the team once Hamilton had completed his media duties.

In Singapore last weekend, it seemed that McLaren still believed they had a chance of keeping Hamilton; at least that was the impression from talking to the team.

But did Dennis already know in Monza of Hamilton's decision to defect? Was Hamilton's sombre mood after that win a reflection of his wondering whether he had made the right decision?

Was Hamilton's ill-advised decision to post a picture of confidential McLaren telemetry on the social networking site Twitter on the morning of the Belgian Grand Prix, the weekend before Italy, the action of a man who had had enough and didn't care any more because he knew he was leaving?

When was the Mercedes deal actually finally signed?

Was it done before BBC Sport broke the story of it being imminent in the week leading up to the Italian race?

Or was it not inked, finally, until this week, on the basis that only now has the Mercedes board committed to new commercial terms with F1 boss Bernie Ecclestone?

In which case, was the gearbox failure that cost Hamilton a certain victory in Singapore, and effectively extinguished his title hopes for good, the straw that broke the camel's back?

In short, was Hamilton's decision based on cold, hard logic, rooted primarily in performance, in making more money, or founded on emotion as much as calculation. Or was it a combination of all those factors?

All these questions will be answered in time. Whatever led to Hamilton's decision, it is fair to say that it is an enormous gamble, one on which the next phase of his career hangs.