All great drivers need luck, but Alonso makes his own

It's not often Fernando Alonso is overcome with emotion, but he only just managed to hold it together as he stood on the podium after a quite stunning victory in the European Grand Prix.

His voice had already cracked as he giggled his delight on the team radio on his slowing-down lap - and in the pits Ferrari team boss Stefano Domenicali was in the same state as he praised a "fantastic" drive by the Spaniard.

But listening to the Spanish and Italian national anthems, the magnitude of the moment almost got the better of Alonso. He choked a bit, grinned, almost cried, gritted his teeth and then collected himself.

No wonder he was so emotional - in the previous half an hour or so, it had all come together to create a perfect weekend for him. 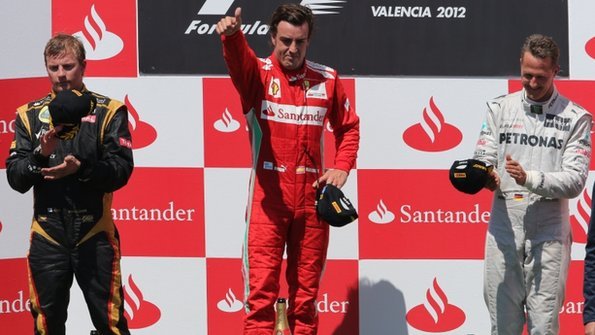 Alonso has driven some outstanding races in his career - he is generally regarded within F1 as the finest driver in the world - but this one has to be right up there with the very best.

Fighting up from 11th place on the grid, he pulled off some quite brilliant overtaking moves to make his way up into contention, the opportunism and skill never better than when he separated Lotus's Romain Grosjean from second place immediately after a restart following a safety car period.

That move meant Alonso inherited the lead when Sebastian Vettel's dominant Red Bull retired further around the same lap. Then, as he completed a spectacular victory, his day was made perfect when the man he regards as his main title rival, Lewis Hamilton, retired with two laps to go.

Both his main rivals out of the race, a momentous win in his home grand prix and less than 24 hours after Spain's football team made it into the semi-finals of Euro 2012. No wonder he was close to tears.

Of course, luck was involved in Alonso's win. He was not going to beat Vettel before the German's retirement - no one was - and he would not have been in a position to challenge Grosjean at the re-start had it not been for yet another pit-stop problem for McLaren.

But Alonso put himself in the position to gain from others' misfortune, and all the other positions he gained he worked for and won in a style befitting one of the greatest racing drivers the world has seen.

Ferrari's superbly quick pit crew played a part, too - one rival engineer said this weekend that they had moved the goalposts for pit stops this year.

But the fact remains that Alonso would not have had to do what he did had Ferrari's strategists not made the error that left him down in 11th on the grid - a decision for which the driver must share some blame.

Ferrari failed to realise that Alonso would need to fit a second set of the 'soft' tyres in second qualifying to be sure of progressing into the top 10 shoot-out.

Lotus had also planned to follow Ferrari's strategy of running a set of 'medium' tyres in Q2 followed by a set of 'softs'.

But when the English team saw how close it was in Q1, they realised they could not afford to take the risk, and switched to running two sets of 'softs' in Q2 and only one in the top 10 shoot-out.

It's impossible to know where Alonso would have ended up on the grid had he made it through.

Fortunately for Ferrari, their blushes were spared by his stellar performance on Sunday - on a track where it had previously been almost impossible to overtake but which came alive this year with the combination of degrading tyres and a DRS overtaking zone judged exactly right.

Ferrari took a fair bit of stick for the decision - and rightly so. It would be dangerous of them not to learn from it for this is not the first time this season that their strategy has been found wanting.

Alonso might have won in Barcelona had Ferrari not allowed Williams to get Pastor Maldonado ahead of him by making their second stop earlier.

As Alonso admitted himself, a win was also on the cards in Monaco had Ferrari reacted more quickly to his blistering pace on his in-lap and left him out to do a couple more.

And in Canada, where he fell back to fifth, he should have finished at least second - and could possibly have won - but the team failed to react to his tyres losing grip dramatically in the closing stages.

Had Ferrari got those calls right, Alonso could have been heading into the Valencia weekend on the back of two wins and a second place, rather than a second, a third and a fifth.

That's 27 points thrown away even before the error in qualifying this weekend. In a season as close as this, even if Alonso wins the title it is unlikely to be by that much.

In each case, the error has been a result of apparently not being reactive enough - being either too fixed on a specific, pre-ordained strategy, and/or too focused on one specific rival and not looking at the bigger picture.

That was exactly what happened in Abu Dhabi in 2010, when another strategy error handed the title on a plate to Vettel.

Ferrari have now got back many of those points thanks to the problems suffered by Vettel and Hamilton.

Vettel would have walked the race had his alternator not failed on lap 34 and the pace shown by Red Bull this weekend will have set alarm bells ringing in Maranello and McLaren's factory in Woking.

At McLaren, though, they have other things to worry about after yet another pit-stop problem for Hamilton.

This time it was a failure of one of the new Ferrari-style angled jacks the team designed as part of a wholesale restructure of their pit-stop operation following problems in Malaysia, China and Bahrain earlier this year.

It lost Hamilton a place to Alonso when the leaders pitted during the mid-race safety-car period - and that of course would have meant he was leading following the retirements of Vettel and Lotus's Grosjean.

Given the tyre problems Hamilton found himself in during the closing laps, it seems unlikely that he would have been able to hold off Alonso for the victory, but it would have meant he was clear of Pastor Maldonado, and therefore the incident that took him out of the race, for which Hamilton was blameless.

Interestingly, if you look back at how many points Hamilton had lost to various operational issues at McLaren this year before Valencia, it was 27 - exactly the same number as Alonso.

Add the 18 or 15 he would have got for either second or third place in Valencia (depending on whether Kimi Raikkonen would have caught him) and that is more than 40.

After Valencia, he is now 23 points behind Alonso. The McLaren has been on balance the fastest car this year, but Ferrari's form is getting better and better and, after Valencia, Red Bull look more formidable than at any time this year.

There are still 12 races to go in an already extraordinary season that clearly has many more twists and turns to come. But Hamilton should be comfortably leading the championship. Have McLaren already thrown it away?