Lewis Hamilton and Jenson Button sat on the stage in front of the car they both hope will take them to the world title this year looking relaxed and happy.

Yet in their responses to apparently innocuous questions, both men revealed much about the different ways in which they approach the 2012 Formula 1 season.

They were asked how they had spent the winter. Button, fresh from arguably his best season yet in the sport, had spent some time in Hawaii. "Somewhere warm to chill out and train," he said, "but it's always the same - you spend a couple of weeks away and you are missing racing, so I was back on 5 January".

Hamilton's 2011, meanwhile, was self-admittedly his worst season yet in F1, with three superb wins interspersed with errors and controversy. 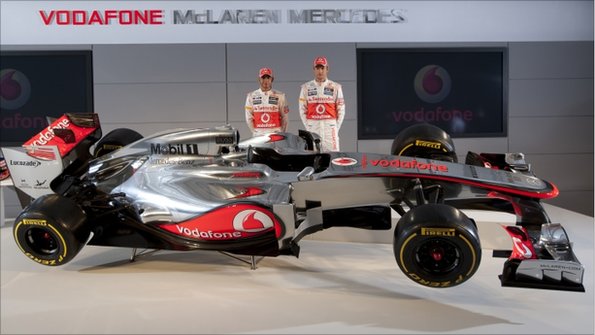 McLaren are set to compete for the title with their new car which was unveiled ahead of the beginning of the Formula One season due to start in March. Photo: Getty

His response to the same question was enlightening."The opposite of Jenson," he said. "I was over in the cold in the mountains in Colorado. I wasn't missing the car too much - it was nice to be away from it awhile, to refresh, start anew, and just getting back to training was great.

"I altered it a little bit this year, I think last year I was training too much. I had a good break and I was grateful to Martin (Whitmarsh, the McLaren team principal) for giving me such a good break."

Later, Hamilton revealed a little more about his desire to make amends for 2011 with a sparkling 2012.

Which race are you most looking forward to, he was asked. "Monaco is the one for me - I want to get back there and have a better race [in which he collided with two drivers and caused a storm with his post-race comments] than last year."

It was a stark illustration of just how much is at stake in 2012 for the man who many still regard as the most naturally talented and out-and-out fastest racing driver in the world.

Whether Hamilton has found the mental equilibrium he desires to enable him to perform consistently at his brilliant best remains to be seen, starting with the first race in Melbourne, Australia, on 18 March.

But much of it may depend on the reason he and Button were up on that stage - the McLaren MP4-27.
His team's failure - for the third year running - to produce a car with which he could consistently challenge at the front was one of the main causes for Hamilton's frustrations last year.

He knows exactly how good he is, so it was galling for him to see yet again that he was not realistically going to challenge for the championship.

As is the way of things, the launch of the new McLaren shed no light whatsoever on whether that will change in 2012.

The car looks nice enough - and it mercifully lacks the "platypus" front seen on the Caterham, the only other new car to break cover so far this year, as a response to new rules lowering the height of the nose.

There was a lot of talk about McLaren's focus on the aerodynamics at the rear of the car, which featured noticeably tighter packaging than last year, and particularly of the need to make the most of pre-season testing and start the season strongly.

That was where McLaren's campaign began to unravel last season - an over-complex exhaust system led to a terrible pre-season with a car Whitmarsh has described as "neither reliable nor quick".

This year's car contains no obvious stand-out innovations but the team were quick to deny suggestions that McLaren had reined themselves in an attempt to make sure the car runs in testing, which Whitmarsh described as "data-gathering".

Engineering director Tim Goss described the MP4-27 as "a complete re-work from nose to tail".

Technical director Paddy Lowe added: "The regulations are trimming us into narrower and narrower boxes so we don't see the big radical changes from one year to the next, so the car looks quite similar.

But there is a great deal of change underneath.

"There still are obvious innovations. We have done a lot of work around the back end, a lot more tidy packaging there. We have had to respond to the change in the exhaust regulations (banning the blowing of exhausts along the rear floor to boost downforce).

That's given the aerodynamicists a big challenge to come up with the (lost) downforce and the balance."

Lowe and Goss are old hands and they did a great job of straight-batting the questions on the stand-out features of the car and it was left to Whitmarsh to utter F1's dreaded c-word.

"I don't believe we've been inherently conservative," he said. "We've set ourselves some tough targets, targets that we think if we achieve them we will win the world championship. I think we will meet those targets, and if they are the right targets, we will win the championships."

To achieve that obvious aim, though, there is the small matter of having to beat the twin formidable forces of Ferrari and Fernando Alonso and, the combination expected to remain the one to beat, Red Bull and Sebastian Vettel.

Just as the car's tight rear takes more than a small bow towards the all-conquering Red Bulls of the last two seasons, it is clear that McLaren have had their eyes on other aspects of their rivals' dominance as well.

"It didn't go unnoticed that Sebastian Vettel put the car on pole a lot and then pulled the gap (from which he controlled the race)," said Goss. "We're aware of it; we've attempted to find ways to deal with it."