The HRT driver, who elected to stay in F1 for a seventh season this year with a back-of-the-grid team rather than look for a more competitive drive elsewhere, certainly knows his F1 history. The Italian's selection comprises five all-time classic events. 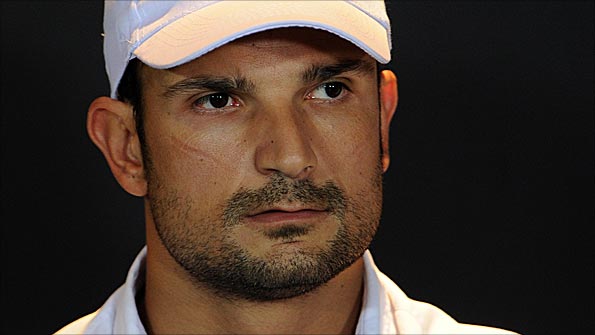 A race famous for what Liuzzi describes as the "amazing fight" between Ferrari's Gilles Villeneuve and Renault's Rene Arnoux over second place in the final three laps, as the two men passed and re-passed each other, occasionally banging wheels in perhaps the most frenetic three laps of racing in F1 history.

The race also marked Renault's first win in F1, courtesy of Jean-Pierre Jabouille, and the first for a car with a turbocharged engine - the type of power-plant that is returning to the sport in the new 'green' F1 from 2014.

This race featured perhaps the most chaotic closing stages in F1 history, with five different leaders vying for the win, and was described by Murray Walker at the time as "certainly the most exciting, eventful grand prix I have ever seen".

Long-time leader Alain Prost crashed his Renault at the chicane in a late shower of rain, leaving Brabham's Riccardo Patrese in front and on course for his first F1 win. But he, too, was caught out on the slippery track, spinning just three-quarters of a lap later than Prost, this time on the hill down from Mirabeau to Loews.

Patrese managed to bump-start his car but only after being passed for the lead by Ferrari's Didier Pironi, who then stuttered to a halt, out of fuel, in the tunnel. That should have given the lead to Alfa Romeo's Andrea de Cesaris but he, too, had stopped with an empty tank, even before he got to the site of Patrese's spin. And Williams driver Derek Daly, who could also have moved up, had stopped with a broken driveshaft. All that meant Patrese crossed the line in the lead, even though, as Liuzzi points out "he didn't know he'd won".

A familiar choice, this is a race that is central to the legend of Ayrton Senna and a key event in his bitter feud with arch-rival Prost, then his team-mate at McLaren. Prost led for much of the race but was caught by Senna in the closing stages. When the Brazilian went for a pass at the chicane, the two men collided.

Prost knew he was world champion if both men retired. But as he climbed out of the car, Senna decided to continue. He pitted to replace a damaged nose cone and recovered to pass Benetton's Alessandro Nannini for a brilliant win.

Senna was later controversially disqualified, leading to the extraordinary development of McLaren appealing against the result of a race that had given the world title to one of their drivers. The appeal was unsuccessful.

Like Monaco 1982, another chaotic finish in the rain, with perhaps an even more extraordinary result. Heavy downpours led to the retirements of many leading drivers, including world champion Michael Schumacher. And the race was brought to a premature end when first Mark Webber crashed his Jaguar at high speed coming on to the pit straight and then Fernando Alonso's Renault ploughed into the debris.

The result hinged on who had crossed the line at the point the race was stopped. Timekeepers initially handed the win to McLaren's Kimi Raikkonen but Jordan were convinced their man Giancarlo Fisichella had won. Jordan appealed, successfully, and Fisichella was named as the winner, Raikkonen handing him the trophy at a little ceremony before the following race, the San Marino GP at Imola.

Arguably the best grand prix there has ever been - and one we dealt with when Mark Webber made his selections last week.

As always, we pick one 'feature' race, so this time we have gone for Monaco 1982. The full Grand Prix programme of the time is embedded below. Underneath it, to whet your appetites for the action in Yeongam this weekend, are links to short and extended highlights of Alonso's momentous victory in last year's inaugural Korean Grand Prix.

Viewers in the UK can watch the classic races on digital television, where we will be showing short highlights of France 1979, Monaco 1982, Japan 1989 and Japan 2005 and extended highlights of Korea 2010.

On satellite, cable and Freeview, they will be broadcast between first and second practice on Friday 14 October from 0335-0555 BST.