The Venzuelan has made quite an impression one way or another in his first season in F1.

On the plus side, he has out-qualified his team-mate, the veteran Rubens Barrichello, an impressive six times in 14 races so far this season.

Not so positively, he has yet to shed a reputation for occasional wildness that followed him from the junior categories, and was on full public display when he drove into Lewis Hamilton's McLaren in qualifying for the Belgian Grand Prix. The incident earned Maldonado a five-place grid penalty. 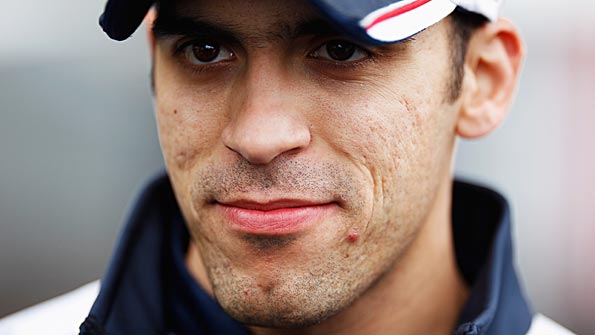 Maldonado not only came to F1 with the backing of President Hugo Chavez and his country's state oil company, he also came to the sport relatively late in life.

He is 26, relatively old compared to the age many drivers make their debut these days. That almost certainly explains his selections for this blog - which span the last 30 or so years and would be classed as all-time greats in anyone's book.

This race is famous for two reasons: the thrilling duel over second place in the final three laps between Ferrari's Gilles Villeneuve and Renault's Rene Arnoux; and for being the first win for a turbo-charged car.

That second landmark, achieved courtesy of Renault's Jean-Pierre Jabouille, has been rather overshadowed by the first.

"This race was before I was born but I have seen it many times," Maldonado says. "It was so great because they were racing wheel-to-wheel, overtaking each other and switching positions. It was amazing. You don't see action like that very often!"

Another event famous for many reasons: a controversial win by Alain Prost; Nigel Mansell crashing out of the lead; and two stunning drives in the wet by rising stars Ayrton Senna and Stefan Bellof.

Prost led from the start in heavy rain but was passed early on by Mansell, who crashed six laps later, blaming the embarrassing incident on his rear wheel losing grip on one of the white lines on the track.

Senna, whose natural talent more than made up for the deficiencies of his Toleman car, then began catching Prost, with Bellof, driving a Tyrrell and, like Senna, in his first season of F1, making inroads into both.

As the weather worsened, Prost, driving a McLaren, began gesticulating for the race to be stopped, which it was as he completed lap 32, just as Senna caught and passed him on the pit straight.

The decision to stop the race was controversial because the man who made it, clerk of the course and former F1 driver Jacky Ickx, was employed to drive Le Mans cars by Porsche, which made McLaren's TAG-badged engine. Ickx has always denied he was influence in any way.

"It was an amazing race to watch, as Senna came from the very back in just a few laps to catch race leader Prost," says Maldonado. "He was overtaking everyone which was even more impressive being in Monaco where it is difficult to overtake anyway. He was amazing in the rain."

A favourite among many of the grand prix drivers this season, this was the first of two consecutive Japanese races in which a crash between McLaren drivers Prost and Senna decided the world championship. It was, as Maldonado points out, "the end of a difficult two-year rivalry for the team-mates".

Prost led much of the race but was eventually caught by Senna. As the Brazilian tried to pass at the chicane in the closing stages, Prost turned in on him and they collided. Prost climbed out of his car but Senna rejoined the race, pitting for a new nose cone before catching and passing Benetton's Alessandro Nannini.

However, that was not the end of the drama. Senna's win would have kept the title battle going until the final race of the season but he was controversially disqualified for missing the chicane and Prost declared champion.

This race at Donington Park has gone down in history as one of Senna's greatest drives and is another favourite among the current crop of F1 drivers.

"There are so many great races from Senna it is hard to single any one out," Maldonado says. "He was always amazing in difficult situations, with incredible instincts, and this was a perfect example.

"From fourth on the grid, he read the changing conditions perfectly, unlike anyone else on the grid, as the race went from dry to wet and back again. He ended up winning by over a minute by the chequered flag! It is like magic watching him."

Relatively recent it might be but already another all-time classic. McLaren's Hamilton and Ferrari's Felipe Massa went into the race, the last in the season, contesting the world championship.

Massa survived a late shower of rain to win the race but, as the Ferrari pit celebrated, Hamilton slipped past the struggling Toyota of Timo Glock at the final corner to take fifth and the title.

"It was so great so see a race go right down to the wire like that and then change at the very last second," Maldonado recalls.

"With so much at stake, it was great as a viewer but not so great for Massa. It was so close I never forget seeing both teams celebrating at the same time not realising what had happened."

As always, we pick one race to highlight in the blog and, ahead of the street race at Singapore this weekend, we have chosen the 1984 Monaco event.

The full grand prix programme of the time is embedded below. Underneath it, to whet your appetites for the action to come this weekend, are short and extended highlights of Fernando Alonso's superb victory for Ferrari in last year's Singapore Grand Prix.

Short highlights from France 1979, Japan 1989, Europe 1993 and Brazil 2008, plus extended highlights from Monaco 1984 and Singapore 2010 will be broadcast on the BBC red button on digital television in the UK.