A week before the British Grand Prix, I sat down with Mark Webber to talk to him for his new column for this website.

Silverstone is a track he adores and always goes well on. So, expecting him to be more of a threat to Red Bull team-mate Sebastian Vettel at Silverstone than he had been so far this season, I asked him if he would be allowed to race and beat the German if the circumstances arose.

He was momentarily taken aback. "Well, yeah, I hope so, yeah," he said. "I don't see any reason why we can't."

Given that Vettel headed into the race in complete control of the season having utterly dominated the championship so far, it is easy to see why Webber would be of that opinion.

As it turned out, though, his team principal Christian Horner was not. 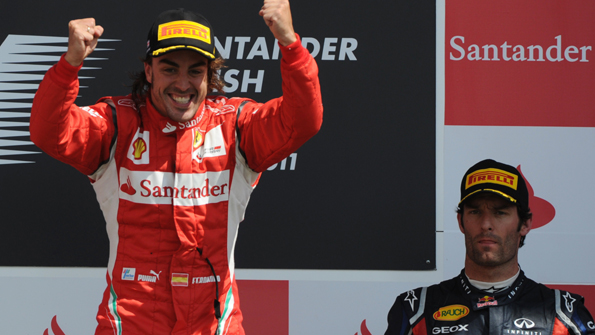 Alonso (left) enjoyed a superb race but it was a frustrating day for Webber. Photo: Getty Images

With a great race winding to a thrilling climax, Horner watched Webber closing in on Vettel at about a second a lap as, ahead of them, Ferrari's Fernando Alonso cruised to a brilliant victory, his first of the season.

Horner would have known how desperate the Australian was for a strong result here, to start to try to make up for a disappointing start to the season compared to Vettel. But he decided that 33 points in the bank for the team was better than the potential of, as Horner put it, "two cars in the fence", and he tried to call Webber off.

And so a wound that has been festering for a couple of years was torn open again.

There is history here, as anyone who followed the titanic struggle between Vettel, Webber, Alonso and McLaren drivers Lewis Hamilton and Jenson Button in last year's championship will know.

The issue of favouritism at Red Bull is a thorny subject with Webber, who last year at Silverstone had a front wing taken off his car and given to Vettel, whose own had failed.
Webber went on to win that race, and famously said over his radio on the slowing down lap: "Not bad for a number two driver."

The issue had been in the background long before that, and has been ever since, occasionally bubbling up to the surface, such as at the penultimate race of last season in Brazil, when Webber said it was "obvious" the team favoured Vettel.

Red Bull have always denied this, while reserving the right to call off fights when they feel the team is at risk - a policy hardened by the collision between their two drivers while disputing the lead at the Turkish Grand Prix last year.

Horner, well aware of the issues, admitted on Sunday afternoon that he could "understand" why Webber would be "frustrated".

He protested that the two drivers were allowed to race until that point, and that he felt the battle had gone "far enough".

And he insisted that the Australian was not being relegated to a de facto number two driver, and that he would still be allowed to race Vettel.

Let's be clear about this - Red Bull did nothing wrong.

Team orders are legal again in F1 this year, after governing body the FIA finally ended a farcical eight years when they pretended they could police whether teams were using them. And bosses are entitled to tell their drivers to hold station, or reverse positions, if they like.

But as an Italian colleague pointed out to Horner on Sunday, Red Bull founder Dietrich Mateschitz made great play before last season's title-deciding race of the fact that his team would never use team orders to interfere with the championship battle, drawing a pointed comparison with Ferrari's demand to Felipe Massa to let Alonso win in Germany.

Horner's reply - "Mr Mateschitz wouldn't thank us for having both cars in the fence on the last lap, having got ourselves into a very good position" - did nothing to redress the obvious disconnect between Mateschitz's words and Red Bull's deeds.

On the face of it, many will feel that Horner over-reacted, given Vettel's massive advantage in the championship. But did he?

Alonso's victory on Sunday was as impressive as any by Vettel so far this season. The Ferrari driver took advantage of a pit-stop problem at Red Bull to take the lead, but once there his pace was, as Horner put it, "very strong".

Alonso clearly had the speed to compete with Vettel for victory at Silverstone, a particularly impressive feat given that this is a track where Red Bull have traditionally excelled and Ferrari have struggled.

On Sunday night, many put Ferrari's speed down to the row over off-throttle blowing of diffusers that has dominated this weekend.

This technology, in which Red Bull are said to lead the field, was banned for the British Grand Prix, and Horner felt this put his team at a disadvantage. Ferrari, by contrast, were believed by some to have benefited.

It would be wrong, though, to put all Ferrari's progress down to the change in the rules.
As Vettel pointed out: "There has been a bit of a trend over the last couple of races; they have been very strong on race days."

My colleague Mark Hughes will go into this subject in more depth in his column on Tuesday, but it is clear that much of Ferrari's progress at Silverstone can be explained by a major development to their car for this race, on which there is more detail in Ted Kravitz's post-race analysis.

Alonso made full use of it on Sunday with a superb drive, to end a victory drought that goes back to last October's Korean Grand Prix.

The Spaniard was cautious about his title chances after the race, as well he might be given Vettel's 92-point advantage over him - nearly four clear wins.

But there is not a driver on the grid more formidable than the Spaniard with the scent of a possible victory in his nostrils.

Horner knows this full well - after Alonso's superb fight back last year, from 47 points off the championship lead following Silverstone, to leading it after that win in Korea.

Asked on Sunday how concerned he was about Ferrari's pace, Horner did not really answer the question. But if that is what was in his mind when he made the call to Webber, it is not that hard to see where he was coming from.