Lewis Hamilton's frustration with life as a McLaren driver has been palpable in recent weeks.

There was his outburst after finishing sixth at Monaco, the result of a messy weekend at a race he was hoping to win.

There was the supposed-to-be clandestine visit to Red Bull team principal Christian Horner on Saturday afternoon in Canada, a matter of hours after qualifying a disappointing fifth for another race he was hoping to win.

There were the messages over the team radio as he laboured in fourth place, struggling with tyre wear, during the European Grand Prix. "I can't go any slower," he said to his engineer after being asked to look after his tyres. And a few laps later: "I can't go any faster," when asked to try to make up some ground.

So will Hamilton still be a McLaren driver in 2012?

Although he has a contract that lasts until the end of that season, someone leaked to the Mail on Sunday that there is an option for Hamilton to leave if either he does not win the drivers' title or the team do not win the constructors' championship this year, neither of which is likely to happen. McLaren will not comment on the veracity of the Mail report.

On Monday the Independent published an interview with McLaren team principal Martin Whitmarsh, who said: "Lewis loves this team and he knows the car is capable of winning races.

"He's sat with me in the last 10 days and explained his passion, enthusiasm and desire to remain part of this team.

"I've known him since he was 11. I don't think he would look me in the eye and say that if he didn't mean it." 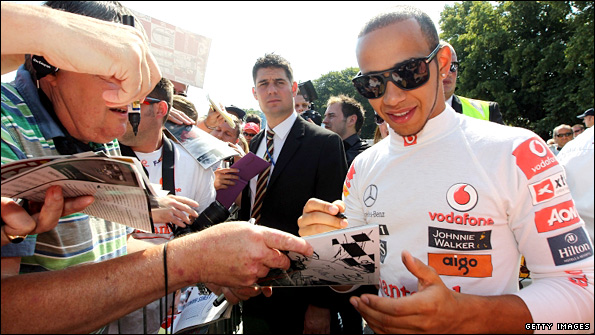 But someone who has spoken to Hamilton about his future recently says that the 26-year-old is not happy at McLaren, and would leave if he could.

And in the last few days, a source with intimate knowledge of the driver market told me that Hamilton had been having "extensive negotiations with Red Bull".

The catalyst for Hamilton's discontent is another year in a car that is again not good enough to mount a realistic challenge for the title - the third in a row now for Hamilton at McLaren since he won the 2008 drivers' title in his second season with the team.

Hamilton is widely regarded in F1 as the fastest driver in the world, and he certainly believes that of himself. So to watch Sebastian Vettel running away to a second consecutive title at Red Bull, in the fastest car on the grid for the third year in a row, is painful indeed.

Publicly, Hamilton continues to say positive things about McLaren. His most recent utterance on the subject of his future was to say: "Fortunately I don't have to make any decisions just yet. I still have a contract for another year and a half."

He has added that he sees no reason to leave as long as he has a competitive car.

Some would follow Whitmarsh in arguing that he does - had things gone differently, Hamilton might have won in Spain, Monaco and Canada in addition to his sole victory so far in China this year.

That would mean he and Vettel would have been tied on four wins each, in which case Hamilton may not have been eyeing the Red Bull quite so jealously.

Even had this happened, however, the Red Bull would remain undoubtedly F1's fastest car - its advantage in the races is far less than it is in qualifying, but it seems increasingly certain that is simply down to the fact that Vettel has to take it easy on Sundays to manage this year's delicate Pirelli tyres.

Hamilton could only go to Red Bull in 2012, though, if two things married up - he has to really want it, and so do Red Bull.

You can be sure Hamilton would think very carefully about engineering a way out of his contract with a team that has nurtured him from the age of 11.

Firstly, there is the personal loyalty he must still feel on one level, even if he might think he has paid a lot of it back with some of his stunning wins in recent years, victories McLaren would not have had without him.

Just as important, though, will be the knowledge that, historically, McLaren always win in the end.

Stay where he is, and Hamilton can be pretty sure he will get a title-winning car eventually - just as Mika Hakkinen did after sticking with the team through the difficult years of the mid-1990s.

Equally, it is not that long since Hamilton dismissively referred to Red Bull as a "soft drinks company". And while McLaren and Ferrari are in F1 for the long haul - it is their raison d'etre - no one can be quite sure how long Red Bull will stick around.

But that's the long-term view, and racing drivers, generally, are pretty short-term people - after all, they have limited shelf lives.

The short-term view is as follows:

The Red Bull is likely to remain the car to beat as long as the current technical structure under Adrian Newey remains in place - which is until at least the end of 2014.

By then, Hamilton will be 29. He will still have plenty of life left in him, but that is a long period to wait fighting the odds - and potentially without a title - when most people consider you the fastest driver in the world.

There are other issues in the mix, too.

Hamilton - and team-mate Jenson Button, it is believed - find the public relations demands of being a McLaren driver quite tiring - and they note the rather different requirements on Vettel and Ferrari's Fernando Alonso, the other member of F1's big three.

Equally, McLaren are quite restrictive of drivers having their own personal sponsors, although Hamilton does have such a deal with sportswear company Reebok.

On the face of it, you might think not. They already have Vettel, their blue-eyed boy wonder.

Why unsettle him by sticking Hamilton alongside him in a match-up that is bound to be super-high-maintenance? And if they do, what is the point of their driver development programme, which is moving on apace with Red Bull protégé Daniel Ricciardo being given his F1 race debut in a Hispania this weekend at the British Grand Prix.

But if Vettel continues to dominate F1 in the way he is doing this year, is that really good for Red Bull? Yes, he is winning everything, but that is likely to turn off a majority of the audience, not excite them. And that is no way to sell cans of soft drink.

Red Bull seeks to project a cool, youthful, exciting image, and what could fit those qualities better than sticking Hamilton in the team alongside Vettel and saying to the world: "There you go. We're got two of the three most exciting drivers in the world and we're going to sit back and watch them go at it."

The reality is that any negotiations that may be taking place will likely be between Red Bull boss Dietrich Mateschitz and Hamilton's new manager, Simon Fuller. Neither of whom routinely give interviews to F1 journalists.

For now, no one beyond that needs to know anything about it - not even Whitmarsh or Horner. So at the end of the day, it comes down to Hamilton and Mateschitz, and how much each of them wants to link up with the other. Time will tell.

UPDATE, 1600 BST: I have just heard from my old friend Gerhard Kuntschick on this subject. He is a journalist for the Austrian newspaper Salzburger Nachtrichten and knows Mateschitz as well as any reporter. Kuntschick spoke to Red Bull F1 adviser Helmut Marko on Monday, who told him: "Red Bull considers Lewis Hamilton as having a firm contract with McLaren and we don't interfere with other people's contracts. But you never know what will happen in the future."