One of the most spectacular races in a very long time produced an appropriately stunning win from Jenson Button in the Canadian Grand Prix.

The McLaren driver came from last place to first in the space of 30 amazing laps on a track that, while it regularly produces the best race of the Formula 1 season, has never produced a race quite like this one.

It will surely go down as one of the most amazing grands prix in history and Button's performance matched it.

For a long, long time, Sebastian Vettel appeared to be on the way to another imperious victory, but the German made his first mistake in what has been a virtually flawless season to hand his English rival a fully deserved victory half way around the last lap.

"An amazing day," said a scarcely believing Button as he sat down in front of the media a few minutes after climbing out of the car.

And as if to underline just how incredible it was, how much the end result turned on the right decisions and the right breaks at the right time, the heavens opened again no more than an hour after the end of the race, in even more dramatic fashion than they had in the course of an afternoon that left almost everyone involved dizzy.

For more than half the race, Button appeared completely out of contention.

He collided with team-mate Lewis Hamilton - an incident for which he apologised even though it appeared to be at least as much Hamilton's fault; made five pit stops to change tyres; survived a collision with Ferrari's Fernando Alonso; and visited the pits a further time to serve a drive-through penalty for going too fast when the safety car was deployed.

Button was last at the penultimate of four restarts under the safety car, with 30 laps to go.

And yet he sliced through the backmarkers with the clinical precision he displays when he is on top form and timed a final pit stop to change to slick tyres perfectly - only one lap after Mark Webber made the call himself, one that was instrumental in moving Vettel's team-mate from the midfield into podium contention.

Those final 20 laps were some of the most exhilarating I have witnessed since I started watching F1 30 or so years ago, as Button closed in on the lead at a pace Webber described as "on a different planet from the rest of us".

With 15 laps to go, Vettel looked unassailable as he pulled away in the lead and Button homed in on a battling Michael Schumacher, who produced by far the most convincing drive of his comeback so far, and Webber.

A final safety car on lap 57 was what put Button into victory contention. He would have easily passed Schumacher and Webber, but the safety car reduced Vettel's lead from a probably uncatchable 10 seconds to zero.

At the restart, the German pulled it out to 3.1 seconds again while Button battled to get past Webber and Schumacher but the Englishman was in range.

"With all the commotion going on, the pressure he put on Vettel at the end, I knew he was going to get him."

Despite his error, Vettel is still in a very strong position in the championship. He actually extended his lead by two points and is now two wins and a fifth place clear of his closest rival, which is now Button following Hamilton's retirement.

His mistake proves that he is beatable if he is pushed hard enough, as was the case last year.

But Hamilton - who still seems the man with the biggest chance of overhauling him for all Button's genius on Sunday - will need to get his act together again if he is to do so.

His controversial collision with Button led to his visiting the race stewards to explain his actions for the sixth time in seven races - an extension of a record that led to the McLaren driver coming out with his now-infamous Ali G remarks after the last race in Monaco.

In the midst of Hamilton's reaction, one phrase was particularly telling. Where does your season go from here, he was asked. "Onwards and upwards," he replied. "Go to the next one and try to stay out of trouble."

Hamilton at least finished an incident-packed race in Monaco. In Canada, where in hindsight he could have won, there were more errors.

He was in the wars as soon as the drivers were released following a safety car start, colliding with Webber in an incident Hamilton admitted was his fault.

Two laps later, as he fought to make up lost ground, came the collision with Button.

But who was to blame is not really the point. Hamilton does seem to have turned into a magnet for trouble this year, and there seems little doubt that the situation is arising out of frustration at helplessly watching another title slip away.

Be that as it may, a slight change of approach is required if Hamilton is to deliver fully his fantastic potential.

"It's the nature of Lewis's attacking style," said David Coulthard as he analysed the Button-Hamilton collision on BBC One. "It's easy to knock someone when they're involved in a series of incidents, but it's why Lewis has so many fans around the world.

"This is just a phase he's going through. He believes he's the best driver in the world. Right now McLaren are not able to give him a winning car, and he's getting frustrated. 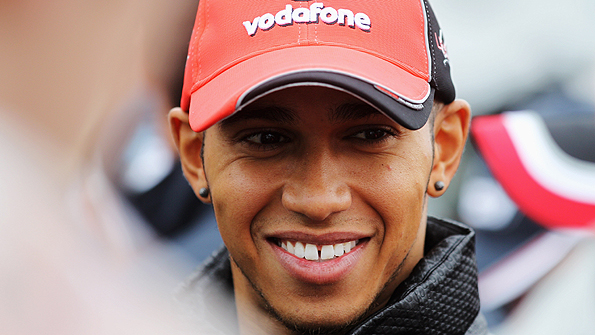 Lewis Hamilton was penalised twice by the stewards at the Monaco Grand Prix a fortnight ago. Photo: Getty

"He wants to win, and that passion, that drive, is what's causing him to get up close and personal with other cars. If I was his management, I'd be saying: 'Chill. Everyone knows you're a great driver, just enjoy it.'"

Heading into the weekend, Hamilton named Ayrton Senna and Gilles Villeneuve as two legendary drivers to whom he would like to be compared.

Undoubtedly Hamilton shares their speed, their verve, their charisma, and their good looks. But he also shares their occasional tendency to go over the limit.

That is, of course, what has given all three their enormous global appeal but in all three cases it also led to races lost through going too far.

Hamilton might well think he fancies his chances against Vettel in a Red Bull.

And, brilliantly as the world champion is driving at the moment, Hamilton is not alone in thinking that is with good reason. What a battle it would be.

But, apparently under contract to McLaren until the end of next season, that prospect is probably not a possibility for the foreseeable future.

Hamilton has to do battle with what he has and make the most of it. If he is to do that, he must stop fretting about Vettel and relax into his racing. In that, he could learn a thing or two from his team-mate.