Bernie Ecclestone will not be able to believe his eyes. For years, decades even, Formula 1's impresario has derided Silverstone, criticising one of the sport's most historic venues for being shabby and behind the times, at times effectively calling it a national disgrace.

The full scale of the track's ambition to upgrade itself into a cutting edge 21st century facility to rival any on the grand prix calendar became clear on Monday, when Silverstone's managing director Richard Phillips gave a tour of the spectacular new pit complex. It was something of a culture shock.

While Ecclestone's criticisms of Silverstone were always exaggerated for effect, it is fair to say that in certain ways the circuit was a touch outmoded. Inevitably, perhaps, for a place that has grown organically over the years from its initial role as a World War II airfield, it has long felt a little cobbled together and rough around the edges. 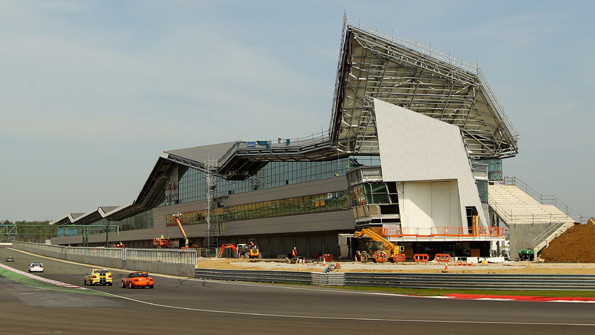 The Silverstone Wing towers over the Northamptonshire track (Photo: Getty)

But the new pit complex, while still a building site, changes all that. Designed by the same architects as the London 2012 Olympic Stadium, the massive new structure bears comparison with those at some of the state-funded new generation of tracks in places such as Bahrain and China.

There may be no gleaming white hotel lit up with multicoloured LEDs such as in Abu Dhabi, but Silverstone's new 'Wing' is impressive nonetheless.

Whether you deem it attractive will be a personal opinion. Its angular roof, with an upturned 'blade' at one end, was intended to evoke a sensation of movement and speed, although the building reminded me a little of an aircraft carrier. But imposing it certainly is.

Three stories high and 390m long, it has cost £27m - a tiny fraction of the money poured into places such as Shanghai and Abu Dhabi, which have a dual role of also being monuments to their governments' global ambition.

There is no shortage of ambition at Silverstone, but it is a more modest one - to keep the British Grand Prix and host it in a facility of which F1 can be proud.

Red Bull team principal Christian Horner joined the media on the tour, and was undoubtedly impressed, even if as a member of the British Racing Drivers' Club which owns Silverstone he was hardly unbiased.

"It's fantastic," he said. "It puts Silverstone right up with the best in the world. It's quite staggering, the scale of what's been built here.

"It gives the circuit a whole new scale and dimension. Silverstone has come in for criticism compared to rivals, certainly in some of the emerging markets, and this is phenomenal.

"It's great for British motorsport. It makes Silverstone a first-class facility. There have never been any question marks about the track itself. It is one of the last remaining serious challenges - Silverstone, Spa and Suzuka are the type of circuits the drivers revel in. And with the facilities now in place it makes it comparable with any other circuit in the world."

The redevelopment of the track followed negotiations with Ecclestone that led 18 months ago to a 17-year contract that should keep the grand prix at Silverstone until 2027.

Replacing the ageing old pit building was a non-negotiable part of the deal from Ecclestone's point of view. But Silverstone argued that it needed a long-term contract, previously unavailable, to give it the stability and security to commit to such a mammoth project. The 17-year deal complete with commitment to rebuild the facility was the result.

The first stage was a new track layout, which made its debut at last year's British Grand Prix. This new building, complete with new pit lane and paddock, is the final step, although a new visitor centre is also planned in the future. 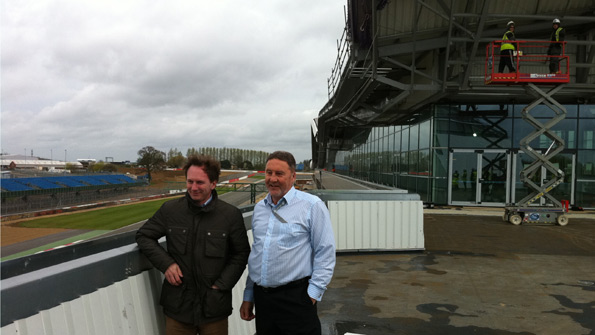 It needed to be impressive - but it also needed to be cost-effective. Silverstone does not have the luxury of open-ended government finance to fund its development and, as Phillips put it, the new building must "pay for itself".

Much emphasis was put on the number of kitchens, and the building's ability to host up to 4,000 guests for hospitality events, the income from which is needed to balance the books in the face of the £300m Silverstone needs to find to fund the full duration of the F1 contract.

On Monday, the place was very much unfinished. Huge areas of what will be grass were churned up mud. Hard hats were required to go into the building. The pit lane was still being built. But already it is possible to see what a spectacular venue it could become.

Clearly, a lot of thought has gone into it.

The new pits are between Club and Abbey corners, at the other end of the track from the old pits. The architects have used the contours of the land to create an interesting situation where the pit-lane entry is above the level of the track, but the exit is below it, in a fashion not dissimilar to Abu Dhabi, but without the tunnel.

Team personnel will walk to the pit wall from the garages down paths between areas of lawn in what for some will be an echo of the old Silverstone 'village green' F1 paddock, which was replaced by a characterless asphalt one in the mid-1990s.

For spectators, there will be a new viewing area towards the end of the lap, complete with giant TV screens, which Phillips hopes will become Silverstone's version of 'Henman Hill' at Wimbledon.

And the redevelopment will have an intriguing impact on the racing.

Moving the pits means Copse will no longer be the first corner, but does create the enticing prospect of a full field of cars streaming together into the brilliant new flat-out Abbey right-hand kink, which last season immediately entered the track's list of great corners.

On the old layout, after Copse, the cars veered through high-speed bends at Becketts and Stowe and did not reach an overtaking point until Vale - more than halfway around the lap. Now, a quick left-hander, which is barely a corner, is quickly followed by the slow Loop hairpin, by which point the field will still be bunched together. As Horner put it, with raised eyebrows belying the understatement, it should be "fairly exciting".

And that seems a pretty fair summation of the future for Silverstone. Frustrated by short-term contracts and the constant threat of the race being taken away, this much-needed new development has been a long time coming. But now it's here, it seems the track can look forward to many successful years of Formula 1.

"It takes a lot to impress Bernie," Horner said, "but I think he will be pleased with what he sees here. He's given it a bit of flak in recent years and if that is what has provoked this, it's been well worth it."