The hotly anticipated new film 'Senna', about the life and career of the Brazilian Formula 1 legend, has finally been given a UK release date - 3 June.

The movie, which I was lucky enough to see last summer, has caused quite a stir both within Formula 1 and the film world and with good reason - it's fantastic. It has already won one significant award from the jury at Robert Redford's Sundance Film Festival earlier this year, who gave it the World Cinema Audience award for best documentary.

It's a marvellous movie and, coming as it does from Working Title, the company behind Four Weddings and a Funeral and the brilliant mountaineering film Touching The Void, that's no surprise.

Senna's story is a compelling one anyway, but what makes this film are the unearthed treasures of previously unseen footage - including revealing snapshots of his life in Brazil and behind the closed doors of the driver briefings at grands prix.

These are weaved together with more familiar images of the great Brazilian's career to create a fascinating story that grips the audience from early on and never lets go. You can get a sense of it from the trailer we have embedded in this blog.

The fundamental story will be familiar to many - Senna's arrival in F1 with high expectations; his unnerving of the established stars with his breathtaking pace; his battle with arch-rival Alain Prost; his emergence as the dominant force within the sport through his talent and magnetic personality and charisma; his death and the shock felt around the world, not just in the sport that he had come to transcend.

But to make it work as a film, the producers had to make a decision about the narrative arc - what was their story line?

They chose the classic theme of the little guy battling against the establishment and, while it works well as a story and is true up to a certain point in Senna's career, it is also where those more familiar with Senna's story may occasionally find themselves questioning it.

Carried along as you are by the power of the film itself and of Senna's presence, you're aware that the events of his life don't fit the theme as comfortably as you might like - not from an objective point of view, anyway.

An example comes in a sequence that is one of the movie's greatest strengths - the way it deals with events surrounding the 1989 Japanese Grand Prix.

This was the first of two infamous collisions between Senna and Prost at Suzuka in consecutive years. The Frenchman turned in on Senna when the Brazilian tried to pass him at the chicane, they collided, Prost climbed out of his car, but Senna went on to win the race, only to be disqualified on dubious grounds for cutting the chicane, a decision that handed the title to Prost. 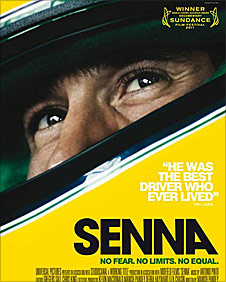 Using previously unseen footage, the film shows Prost making his way to the stewards' room after the race and talking to Jean-Marie Balestre, the president of the sport's governing body, then called Fisa.

It creates a powerful reminder of how badly treated Senna was that weekend by the powers that be, so it fits nicely with the story of the film. Prost is painted as the villain, manipulating his powerful contacts to the detriment of the wronged, naïve, brilliant upstart.

But of course the reality was much more complex than that. This sequence is not preceded by any sense of how things had got to that point between Senna and Prost, no relating of Senna's aggressive driving tactics towards his rival, or his breaking of an agreement the two had made before the San Marino Grand Prix earlier that year.

It is only later in the film - by which time Senna himself has effectively become the establishment - that this darker side to his sporting personality, the slightly unhinged aspect to his character, is touched upon.

On an objective level, this undermines the film a little. But from a cinematic point of view it undoubtedly makes for a more powerful story.

This film is telling Senna's story, from Senna's point view. He is used as a narrator in death, through archive interviews, in much the same way as the hero of Touching The Void, Joe Simpson, is used in life in that film, and the end product is similarly superb.

'Senna', then, is not an unbiased movie; it's not trying to be. But it is a brilliant and beautiful one.