A new twist in the long-running row over the use of the Lotus name in Formula 1 has emerged with the announcement that the owners of Team Lotus have bought niche sportscar manufacturer Caterham.

Tony Fernandes and his partners see Caterham, which makes replicas of the old Lotus Seven two-seater open-top sportscar, as a company with historic links and "synergies" with Team Lotus that allows them to realise their ambition of diversifying into making road cars.

Their original plan was to do that with Group Lotus, the company that markets Lotus sportscars, but as Fernandes puts it: "That obviously didn't turn out very well."

What the Malaysian businessman, and owner of budget airline Air Asia, is referring to is the increasingly bitter dispute between him and Group Lotus that has ended up in the High Court.

When Fernandes and his partners first set up what was then called the Lotus Racing F1 team last year, it was with the blessing of Group Lotus, which licensed them the name. But in the course of 2010 Group Lotus's new chairman Dany Bahar decided he wanted to go his own way in F1.

He terminated Fernandes' licence, and switched instead to a sponsorship deal with the Renault team. Fernandes, seeing this coming, bought the rights to the historic Team Lotus name as a fall-back.

Both issues - the termination of the licence and the ownership of the Team Lotus name - are wrapped up in a court case that was heard last month, with a verdict expected early in May.

Fernandes is widely expected to win the rights to continue to use Team Lotus. He bought it legitimately from its previous owner, David Hunt, brother of the late world champion James, and Group Lotus has always acted in the past as if it knew it did not own the name.

Nevertheless, buying Caterham does provide Fernandes with an interesting fall-back option should the court case go against him. Now he owns his own car company, he could re-name the F1 team after it should he want to. 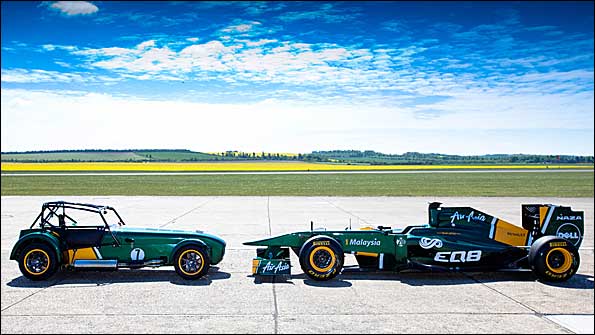 For now, though, he says that is not an option. Fernandes told BBC Sport that he is "absolutely not" going to change the name of Team Lotus. Although he does add: "Obviously we have to wait for the verdict to see exactly what has been decided. But we see a very natural link between Team Lotus and Caterham, and they can be synergistic and promote each other, and there is some DNA between the two anyway. It's not like we've bought a brand that has no association with Team Lotus at all. It's just the opposite."

The Caterham name will, though, soon appear on the Team Lotus F1 cars - although exactly when and how has yet to be decided - and the company will eventually contribute to the Lotus budget as a sponsor.

Assuming he retains the rights to Team Lotus, that still leaves Fernandes in the sticky position of providing free promotion to a company with which he is in dispute and has no links.

Unsurprisingly, he did not want to get into that on the day of his big announcement, but he could not resist a little snipe or two at Bahar.

Fernandes says he sees Caterham as very much following the legacy of the late Lotus founder Colin Chapman. "In some ways," he says, "we have reunited the Chapman history. Lotus is all about lightweight, more is less. That is all the terminology we like, and it fits with F1. We feel there is a huge opportunity for Caterham in a market no one is really looking at right now."

By that, he means lightweight, affordable sportscars that are within reach of ordinary people. This was Chapman's approach, and one which, Fernandes says, "certain people have abandoned". That is a reference to Bahar's plans to take Lotus upmarket and challenge Porsche and Ferrari with his mooted five new Lotus models by 2015.

So far, the dispute between the two Lotuses has not reached the race tracks of F1.

Team Lotus started this season with chief technical officer Mike Gascoyne setting ambitious targets of catching Renault by the end of the season, but that looks out of reach for now - Renault have started the season strongly enough to set their own difficult goal, of beating Ferrari to third place in the constructors' championship.

But Team Lotus have also started the season well. The car has had reliability problems, but it also has underlying pace, and in the last race in China they beat established teams for the first time since entering F1 at the beginning of last year, with Heikki Kovalainen finishing ahead of a Sauber and a Williams.

Kovalainen's performance is a clear indicator that Lotus's more realistic target, of scoring points and mixing it with the established teams, is achievable.

Fernandes himself has his feet firmly on the ground. "You build things properly and with the right structure and things will fall into place," he says. "My target this year was to maintain 10th, and hopefully sneak a few points along the way. That is still my target.

"It is beginning to feel more realistic now, but one can't build a challenging F1 team in two years. We are competing against guys who have been there for 30 years but obviously the team smell big steps of improvement. They smell points.

"I never want to kill confidence, I encourage it, but I am also a realist and we are competing against nine guys who have been doing it for years and are very good at it.

"But if you'd asked me do I think at Turkey (the next race on 8 May) you'd be where you are, I wouldn't have believed it.

"We've got a good package and good people, we have put all the infrastructure in place.

"We're working on a new wind tunnel; that's the last piece of the jigsaw puzzle, and I think if you put all the pieces of the puzzle together then the results will come in good time."