It is an awful irony that it has taken Robert Kubica's horrific crash in a rally car on Sunday to bring him to the attention of the wider world.

Despite four and a half seasons in Formula 1, the 26-year-old Pole was not exactly a household name. Such is the lot of a grand prix driver who does not find himself in a front-running car.

But Kubica is very different from the other men pounding around in the midfield, to whom the wider TV audience pay only scant attention while focusing on the big names battling it out at the front.

This is a man who is increasingly regarded as one of the very finest racing drivers in the world - someone who, as David Coulthard put it on Monday, can be talked about in the same breath as the likes of Fernando Alonso, Lewis Hamilton and the new world champion Sebastian Vettel.

Kubica has won only one grand prix - a superb drive for BMW Sauber in Canada in 2008 - but there was an ever-growing number of F1 observers awaiting with increasing impatience the time he would get his hands on a competitive car.

The signs have been there for some time, little snapshots that made you sit up and take notice that this was someone out of the ordinary.

In 2006, his pace as BMW Sauber's test driver effectively ended the career of 1997 world champion Jacques Villeneuve - when the Canadian fell out with the team, they needed no encouragement to sack him and replace him with Kubica, knowing that he was not only cheaper, but significantly faster.

Despite zero experience, Kubica was brilliant in the second half of that year, immediately out-pacing his team-mate Nick Heidfeld, a veteran of more than six seasons, and taking a podium finish in only his third grand prix.

Kubica's driving style - turn in early and on the brakes, demanding a lot from the outside front tyre - meant he was affected badly by the switch to a single tyre supplier, and consequent lower grip levels, in 2007.

But he bounced back with a bang in 2008, driving with stunning consistency and pace to lead the championship after that win in Canada mid-season.

What happened next rankles with Kubica to this day.

BMW's plan was to use 2008 as a building year for a full title assault in 2009, and they stuck to it resolutely, easing off development of their race car just as they had got themselves to the top of the pile, in order to concentrate on their next model.

Their logic was that the car was not really quick enough to win the title against the superior machines of McLaren and Ferrari, that they were only leading the championship because Kubica had been more consistent than his rivals - and that the top teams would eventually get their act together. 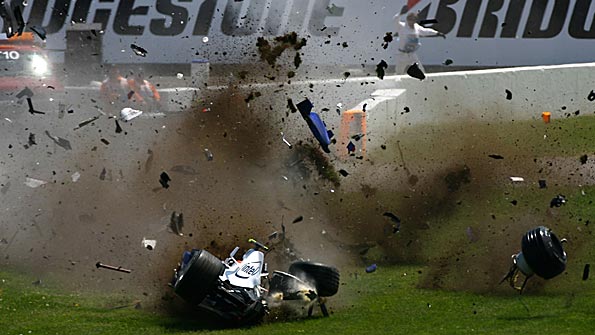 Kubica missed only one race after emerging unhurt from this crash in 2007. Photo: Getty

Kubica didn't see it that way - he saw a team giving up a golden opportunity to win the championship. Even with BMW's decision, he ended up finishing third, in contention until the penultimate race.

BMW's intransigence - matched, it has to be said, by Kubica's stubbornness - fatally damaged the driver's relationship with the team, and is almost certainly one reason behind his generally lacklustre 2009 season, when Heidfeld more or less matched him.

Even then, though, there were flashes of genius from Kubica, and last season, following his move to Renault, the doubters became less and less.

The 2010 Renault was not a great car, and had no business mixing it at the front with the Red Bulls, Ferraris and McLarens.

But Kubica performed miracles to qualify it in the top three at Monaco, Spa and Suzuka, the three tracks where a driver's input is most important, where a great driver can transcend the level of his car.

How good is he?

Among his fellow drivers, there has never been any doubt about Kubica's quality. Hamilton regards him as a future world champion - Kubica was the Englishman's main rival in their karting days as teenagers; Alonso has been quoted referring to him as the best driver in the world.

It is also a little known fact that, when Vettel was an inexperienced BMW test driver in 2007, Kubica was an average of about 0.4secs quicker than him.

At Renault, they adore him - technical director James Allison was effusive in a profile of Kubica my colleague Mark Hughes wrote for this website last season.

Allison, who has also worked with Alonso, described Kubica as "one of those very, very top guys where you know that if the car is not running at the front it's because of the car, not him", adding that he was "incredibly fast, won't make mistakes under pressure and will plough on for lap after lap at a really good pace".

Ferrari, too, have noticed his ability. He came very close to replacing Felipe Massa when the Brazilian suffered a fractured skull in a crash in Hungary in 2009, missing out only because he was too big for the car.

The interest remains. And before Sunday, most in F1 expected Kubica to replace Massa eventually, either at the end of this year or next.

Even a Ferrari drive, you suspect, would not change him. Kubica is totally unaffected by fame, has a complete lack of interest in self-promotion and is unimpressed by the razzmatazz of F1.

It now remains to be seen whether he will ever sit in the Ferrari that appears to have his name on it.

F1 drivers are renowned for their near-miraculous ability to recover from terrible injuries - they are to a man very fit and tremendously determined. And as someone close to him said on Monday, Kubica is also "totally stubborn". He will need all his single-mindedness to fight back after this.

But he has done it before. After breaking his left arm in 13 places when a passenger in a road-car crash early in 2003, doctors said he would be out for between six months and a year. Three months later he made his Formula Three debut and won.

Equally, after surviving virtually unscathed a horrific barrel-roll in the 2007 Canadian Grand Prix, doctors advised him to sit out the US Grand Prix seven days later. He was back for the following event in France, and qualified and finished fourth.

On Monday, the initial prognosis was about as positive as you could expect in the circumstances. Nevertheless, with such serious injuries, it seems likely that Kubica will be out for most of the season and replacing him is going to be impossible for Renault. There are simply not any drivers of comparable quality around.

Renault have two 'third drivers' in Bruno Senna and Romain Grosjean, but both are inexperienced and unproven, just like Kubica's team-mate, the Russian Vitaly Petrov. Will a team with aspirations of winning a couple of races this year feel they can go into a full season with a driver line-up like that?

The other option is to take someone experienced. They could potentially try to buy 2010 Williams driver Nico Hulkenberg out of his reserve driver contract with Force India. And Italian Vitantonio Liuzzi, rejected by Force India this season despite having a contract, is also available.

But the obvious contender is Heidfeld, F1's Mr Consistency, who may not set the world on fire, but can be relied upon to be decently quick and score regular points.

Whoever it is, they have a tough act to follow.