I'll make this as simple as possible.

There will be two teams bearing the Lotus name in Formula 1 next year.

One, following Wednesday's announcement of Lotus Cars' decision to sponsor and eventually buy into what was the Renault team, will be called Lotus Renault. That team will be part-owned by Lotus Cars but their F1 cars will be called Renaults and will use Renault engines.

The other will be called Team Lotus. This one has nothing to do with Lotus Cars (any more - but we'll come back to that in a moment) but their F1 car will be called a Lotus. They will also use, er, Renault engines.

Both teams, it transpires, plan to run their cars in variations of a black and gold livery. This is an attempt to hark back to the historic John Player Special livery made famous by the original Team Lotus in the 1970s and 1980s through great drivers such as Emerson Fittipaldi, Mario Andretti, Ronnie Peterson, Nigel Mansell and Ayrton Senna, and era-defining cars like the Lotus 72 and 79.

It's a commentator's - and journalist's - nightmare and one can only begin to imagine the confusion it will create for those watching.

So what on earth is going on?

The story starts in 2009, when Malaysian businessman Tony Fernandes obtained a multi-year licence from Lotus Cars to use the Lotus name in F1, having persuaded the Malaysian-owned company that an involvement in grand prix racing would be a valuable promotional tool.

Lotus Racing were one of three new teams in F1 in 2010, the others being Virgin and Hispania. All three spent the year close to the back of the grid, but Lotus did establish themselves as convincingly the most competitive.

In the course of the year, though, Group Lotus's approach to F1 changed, as part of a hugely ambitious refocusing of the company's future plans by chief executive officer Dany Bahar, who formerly worked in the commercial arms of Red Bull F1 and Ferrari.

Bahar, it transpires, was never keen on Lotus granting the licence to Fernandes, and it has become clear through 2010 why - he wanted to take the brand into F1 himself, but in a different way, through an involvement with an established team.

At the Paris Motor Show in October, Bahar announced plans for five new road-car models, expanding Lotus's range by nearly 200%, and has since said Lotus will enter IndyCar racing in the US and race at Le Mans. And now comes a major sponsorship deal with what used to be the Renault F1 team which will, at an undefined point in the future, morph into Lotus part-owning that team.

Fernandes, meanwhile, struck a deal in September to buy the rights to the Team Lotus name from David Hunt, brother of 1976 world champion James. Hunt had bought them when the original Team Lotus collapsed in 1994 after racing in F1 since 1958, during which time it had established itself as one of the sport's most iconic names.

Fernandes' success in buying the name - exclusively revealed by BBC Sport - marked the point at which what had until then been a private dispute between him and Lotus Cars - which is owned by the Malaysian company Proton - broke out into the open.

Following Fernandes's acquisition of the Team Lotus name, Group Lotus claimed that it owned all the rights to the Lotus name - a point of view robustly disputed by Hunt, who points out that Proton have several times tried to buy the Team Lotus name from him without ever being able to conclude a deal.

The dispute got so heated that former Malaysian Prime Minister Mahatir bin Mohamad stepped in to mediate, but he succeeded only in stopping the ping-pong of press releases. The dispute is now going to the High Court - and it is unlikely to be resolved until next year. 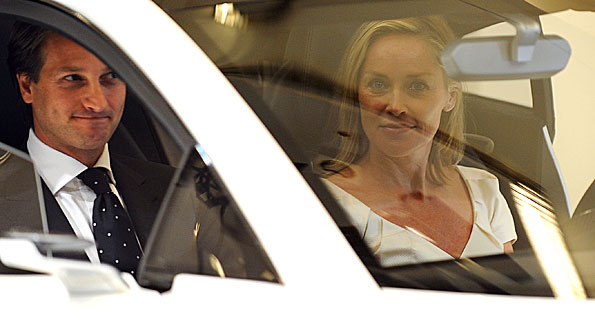 But the disagreement over the ownership of Team Lotus is only one of two ongoing legal cases between Lotus Cars and Fernandes. In the other, Fernandes is suing Lotus Cars for breach of contract over its withdrawal of the licence to use the Lotus name in F1.

That, too, is not expected to be resolved until some time next year.

Both sides, then, have got themselves into a bit of a pickle.

Lotus Cars has struck a deal to promote its brand in F1 through a team that is knocking on the door of breaking into the top three - and which, in Robert Kubica, has one of the finest drivers on the grid.

But it is doing so with a car that is called a Renault - and there is no way out of that one.

Lotus and the team's majority shareholder, the private investment group Genii Capital, cannot change the constructor name assigned to their team because if they do so without the permission of all the other teams they will lose the millions the team earns through Renault's historic achievements in F1, which date back to their entry in 1977.

And guess which team would not agree?

Fernandes, meanwhile, faces the prospect of his team giving free publicity to a company with which he is in two separate legal disputes. And even if he changed the name of the team to something else, his cars would still be called Lotuses.

It is an unsatisfactory situation for all involved - the efforts of both parties will be diluted by a dispute that, for those watching, will create only confusion.

Fernandes is understood to be increasingly confident that he will win the court case over the Team Lotus name. Lotus Cars, for its part, appears not to be overly concerned about the existence of a second team diluting its brand. Their view is that only one of the teams is affiliated with Lotus, and the other one is providing free advertising for it.

In the meantime, questions hang in the air.

Is the end game for Fernandes to sell the Team Lotus brand to Lotus Cars if he succeeds in establishing that he owns it? Can Lotus - and its parent company Proton - sustain such an ambitious programme? And so on.

In the murk, only one thing seems clear - this is only the latest stage in a story that will rumble on for some time to come.