The agreement for Formula 1 to switch to a new energy-efficient type of engine in 2013, exclusively revealed by BBC Sport, is the culmination of months of in-depth negotiations about one important aspect of the future of the sport.

Increasing F1's sustainability was a key aim of both Jean Todt - the president of governing body the FIA - and the Formula 1 teams through their umbrella organisation Fota, and this move certainly makes a statement about that.

By replacing the current 2.4-litre normally aspirated V8 engines with 1.6-litre, four-cylinder turbos with energy recovery and fuel restrictions, F1 has deliberately mirrored the way road-car manufacturers are taking the cars we all drive on the road.

Fossil fuel supplies are running out and there is an ever-increasing pressure on resources, but there is no realistic replacement in sight for the internal combustion engine for some time to come, despite the hopes for zero-emission hydrogen fuel cell engines, for example.

In those circumstances, car manufacturers have no choice but to produce ever-more efficient engines.

That is already happening with 'hybrid' cars such as the Toyota Prius and an increasing number of manufacturers rolling out energy-saving technologies across their ranges.

But the manufacturers involved in F1 hope that by adopting these technologies in a glamorous, high-profile activity they can speed up their adoption by making them 'sexy'.

So whereas now high-performance and fuel economy/efficiency are regarded among the wider public as pretty much mutually exclusive, F1 can prove otherwise and by extension help in dramatically reducing the carbon dioxide emissions produced by road cars in the future.

They will do this by producing new engines that reduce fuel consumption by as much as 50% while retaining the same power and keeping competition as close as it has been in 2010.

It is not all about philanthropy, though. Inevitably, there is self-interest involved too.

F1 is aware that it has an image for being profligate with resources. In an era when there is increasing pressure on energy supplies, it is nervous about its position as an activity that literally burns fossil fuels for fun.

By introducing these new rules, F1 is hoping it can go some way towards insulating itself against accusations that it is an irrelevant waste of resources.

It can counter any such claims by pointing out that the pursuit of the maximum possible power output for the minimum possible fuel consumption by some of the world's brightest engineers in the white-hot competition of F1 will lead to a much faster development of energy-efficient technologies.

These advances will thus transfer much more quickly to road cars than they would have done, thereby reducing global CO2 emissions quicker than if F1 had not bothered.

It is a noble idea and it sounds like a no-brainer - and regular readers of this blog may remember that I wrote about the likelihood of these rules as long ago as April - but there have over the past few months been serious doubts about whether they would be adopted in 2013, as was originally the plan.

That is because as F1's power-brokers began to discuss the idea, economics and politics threatened to put the brakes on it.

The move was opposed for some time by Mercedes and Ferrari because they felt it did not make any sense to commit to spending millions designing a new type of engine at a time when the sport was trying to cut costs, and teams were facing problems finding sponsorship as the global economic crisis bit. 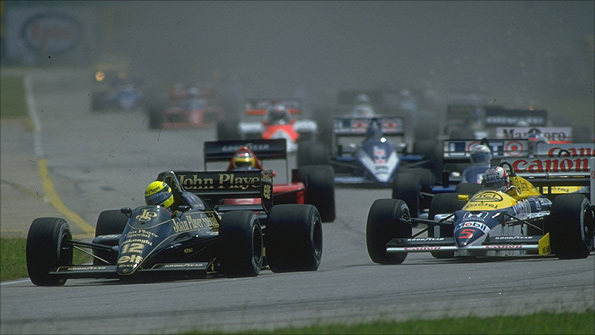 F1 cars last used turbos in the '80s - they are coming back for 2013 in a very different form. Photo: Getty

Better, some felt, to delay such a big change by a year or two - or perhaps even five - and make some nods towards efficiency with the current engines, than embark on such a complex programme at such a difficult time.

How, these people argued, would they convince the boards of major car companies to spend anywhere between 50-100 million euros building new engines for F1 when the current ones worked perfectly well and all car manufacturers were struggling financially?

There were other objections, too.

The background to the talks was that the 2010 F1 season was developing as one of the greatest in the sport's history, with five drivers in three teams competing for the world championship.

All involved were painfully aware that it would be foolish to introduce a new regulation that put the closeness of competition at risk.

F1 commercial boss Bernie Ecclestone put it this way to me when I spoke to him about the prospect of the new rules: "It's not necessary. We have a very good engine formula. Why should we change it to something that is going to cost millions of pounds and that nobody wants and that could end up with one manufacturer getting a big advantage?

"We don't need to do it; all the manufacturers are doing it (in their road cars) already."

At the same time, F1's senior figures were aware that while the current 2.4-litre V8 engines might appear to be wasteful, in actual fact they are more efficient in terms of specific fuel consumption - the amount of power produced per unit of fuel - than any road-car engine.

The counter-arguments to these objections were as follows:

Nevertheless, even the most ardent proponents of the new rules recognised that those arguing against had a point - no one had an appetite to spend tens of millions of euros on a new F1 engine and no one wanted to wreck the on-track show.

As a result, I'm told, a series of checks and balances have been built into the new rules to ensure that the engine manufacturers cannot engage in a spending war and to prevent one of them gaining a significant performance advantage over the others.

It was also recognised that an F1 car had to remain what it is - super-fast, with a very powerful engine. So the new engines will produce about the same total power output, 750bhp, as the current ones.

How they do it, though, will be very different.

Only 600bhp of that will come from the 1.6-litre, four-cylinder turbo engine itself; the remainder will be generated by the energy recovery systems that will be integrated within it. Fuel consumption will be restricted both by limiting fuel flow and introducing a maximum capacity for races.

Current engines rev to 18,000rpm - a figure that has come down from more than 20,000rpm in recent years as the FIA has introduced limits as part of cost-saving moves. The new ones will not do more than 10,000rpm.

That in itself caused concern - believe it or not, there was disquiet that the new engines would not sound 'right', that they would be too quiet.

Anyone who has witnessed an F1 car at close quarters will be aware that they make a quite shattering noise - few things on this earth are louder.

Certainly, the new ones will sound different - and quieter - but whether that is better or worse depends on your point of view. It is almost certainly also a question that concerns the ardent F1 fans who live for the sport a lot more than it does the millions more who switch on their televisions every other weekend to watch a race.

It sounds almost surreal to think that this was a serious point of discussion among such serious-minded people, but I can assure you it was.

Whatever your take on it, though, the new engines have won the day, and their adoption will be announced sooner rather than later, even if it is not after the FIA World Council meeting on Friday 10 December, as I'm told it could well be.

This, though, is just the first of many sets of talks about the future of F1.

To come are negotiations over a new Concorde Agreement, the document that binds together the teams, the FIA and the Formula 1 Management (FOM) companies, represented by Ecclestone, and which runs out at the end of 2012.

The teams are pushing hard for their split of the sport's huge revenues to increase from 50% to 75%, and early indications are the FIA is also seeking a major shift in its relationship with FOM.

If talks over a new engine formula felt difficult and protracted, those over the new Concorde Agreement promise to be something else again.