Part of what makes Formula 1 so compelling is its ruthless exposure of the strengths and weaknesses of its participants.

Quite apart from a sporting spectacle which, at its best, can compare with any in the world, F1 is life in extremis. Its high-pressure, high-intensity environment remorselessly reveals the true competitive and psychological natures of those involved.

There are examples of both of these aspects of the sport in the latest edition of our classic grand prix series - great races exposing drivers' weaknesses of both kinds for all to see.

This selection of races precedes the inaugural South Korean Grand Prix, which takes place on 24 October. The doubts over whether the new track would be ready are over but there is of course no archive for us to mine in the usual manner.

Instead, we have chosen five grands prix from tracks that are no longer on the calendar - the sort of places, indeed, that have made way for the new generation of grand, government-backed circuits of which Korea is just the latest example.

This is not the place to get into the rights and wrongs of F1's new direction; instead we can revel in the glories of the sport's past as a way of whetting our appetites for the next instalment of a season that itself will go down in history as an all-time great.

So, to the five choices. As ever, we'd like you to tell us your favourite by way of a response below, and we will use those views to help inform our choice of the 'winner'. For this race, we will show the full 'Grand Prix' highlights programme from the time. The others will all get shorter highlights edits.

The first choice is the 1979 South African Grand Prix, a race that is little-remembered despite a stunning victory by Ferrari legend Gilles Villeneuve.

It was the Canadian's first win in the year in which he established himself without doubt as the greatest driver in the world - and it gave his team-mate Jody Scheckter a glimpse into just what he was up against if he wanted to become world champion in his first season with Ferrari, which was exactly why the South African had been employed.

Scheckter did eventually achieve his and Maranello's ambition, but only thanks to Villeneuve obeying team orders to sit behind him at the Italian Grand Prix in September.

Through the year, though, Villeneuve established himself as the faster of the two men, and only bad luck, and a few mistakes, prevented him becoming world champion.

The South African race was red-flagged after a couple of laps because of a heavy rain shower, with Villeneuve leading from Scheckter. At the restart, the Ferrari drivers chose different strategies - Villeneuve starting on wet-weather tyres; Scheckter dry-weather, untreaded slicks, gambling that it was not going to rain again.

Slicks were the right choice - although Villeneuve shot off into an early lead, his wet tyres were soon shot and he had to pit to change rubber after just 15 of the 78 laps.

The stop put Villeneuve 30 seconds behind Scheckter, a margin which he closed in just 33 laps. Under pressure from his team-mate, and aware of the fact that he had just lost a second a lap for 30 laps to a man in the same car, Scheckter locked his brakes going into a corner and flat-spotted a tyre, forcing him into the pits and giving Villeneuve a lead he was never to lose. 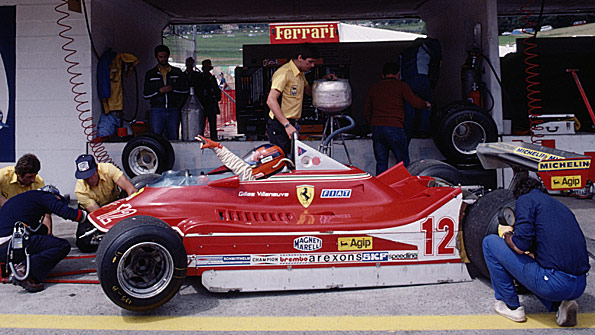 Gilles Villeneuve features in two of our choices. This is him in the 1979 Ferrari 312T4. Photo: Getty

Our next choice also features Villeneuve, but in less happy circumstances - it is the 1982 San Marino Grand Prix.

Held in the middle of a huge political war in F1, many of the English teams did not attend the race at Imola, and that left a 13-car grid and the turbo-charged cars of Renault and Ferrari to stage a private battle.

Following the retirements of the Renaults of Alain Prost and Rene Arnoux, Villeneuve was left in the lead from team-mate Didier Pironi, who had been more than a second slower in qualifying. The scene unravelled into one of the great tragedies of F1.

The Ferrari drivers knew fuel was marginal but they both dipped below the lap record immediately after Arnoux retired.

Ferrari prepared a pit board telling them to 'slow' - ie, hold position - but, according to team boss Marco Piccinini in an interview with Mark Hughes a few years ago, on that lap Villeneuve went briefly off on to the grass, so Pironi received it first.

The relevance of that is debatable, as the long-standing internal Ferrari rules at the time, of which Pironi claimed ignorance, were simple - if at any point the cars ended up running one-two, the guy in the lead was to win.

Villeneuve soon re-passed Pironi and then slowed down, measuring his pace to ensure he got to the finish. But then Pironi passed Villeneuve again. And speeded up.

No problem, thought Villeneuve, he wants to put on a bit of a show. He speeded up and re-took the lead. And slowed down again. Whereupon Pironi passed him again.

So it went on until with three laps to go Villeneuve re-took the lead and, now very worried about fuel, slowed down again. Pironi held station behind him for a couple of laps and Villeneuve, believing Pironi had finally seen sense, slowed down.

But then, on the last lap, Pironi surprised Villeneuve by passing him for the lead into the Tosa hairpin, the only real overtaking point.

Villeneuve, furious at what he considered the duplicity of a man he had supported through some dark times and who he considered a friend, stood stony-faced on the podium, then marched off before speaking to the media, not wanting to say something he might regret.

He vowed never to speak to Pironi again, and felt equally let down by Ferrari team principal Marco Piccinini, who refused to condemn the Frenchman publicly.

Two weeks later, Villeneuve, still bitter, was killed in a crash in qualifying for the Belgian Grand Prix.

The next choice is the 1985 Dutch Grand Prix, and a battle royal between McLaren team-mates Niki Lauda and Prost.

Lauda had narrowly won the title when the two dominated the previous season, but 1985 had all been about Prost, who was in a title battle with Ferrari's Michele Alboreto. Lauda, through a combination of poor reliability and lack of pace, had not won a single race.

At the classic seaside Zandvoort circuit, Lauda again qualified poorly, in 10th place, but after his trademark climb back up the field in the early laps, he found himself in the lead when Prost had a problem at his pit stop.

The Frenchman lost a lot of time but closed quickly on to his team-mate's tail. The two had a good relationship, but although Prost was much faster than him and battling for the championship, the Austrian was not about to give up what he realised was probably going to be his last chance to win in his final season before retirement.

Prost tried everything he knew to get past, but Lauda used all his guile to stay ahead, and the two men crossed the line just 0.232 seconds apart.

The fourth choice is the 1991 French Grand Prix, a rare bright spot in a difficult season for Ferrari and a fine battle between their driver, Prost, and Williams's Nigel Mansell.

After a disastrous start to the year, the Italian team introduced a new car for Prost's home race, and he very nearly claimed pole position on its debut, just missing out after a great lap by Mansell's team-mate Riccardo Patrese. Mansell took fourth behind Ayrton Senna's McLaren.

Patrese, though, made a poor start and Prost took the lead from Mansell - and the two soon disappeared into a race of their own.

By this stage of his career, Prost was an elder statesman and he had begun to measure risk against reward more carefully than some of his rivals.

He became wary of racing in heavy rain, because of the lack of visibility, and he was more circumspect when passing backmarkers. This was to be the key to the race.

Mansell, in the faster car, piled the pressure on to Prost, and eventually passed the Ferrari when he hit traffic on lap 21.

The Englishman began to edge away in the lead, but problems at his tyre stop put him back behind Prost and he had to do it all over again - passing the Ferrari for the final time, again with the help of traffic, on lap 54.

Finally, we have the 1996 Portuguese Grand Prix, and a superb victory by Jacques Villeneuve at the expense of Williams team-mate Damon Hill. 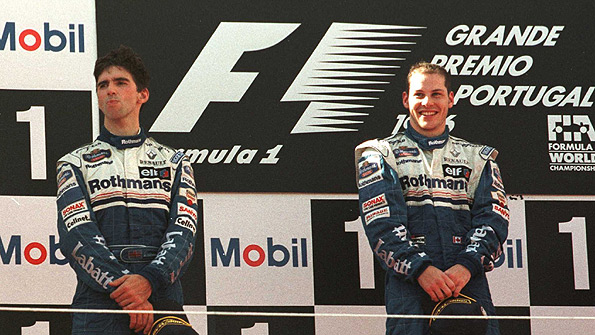 The Canadian - son of Gilles - realistically needed to win in Portugal to keep the championship battle between himself and Hill alive to the final race in Japan.

Hill took pole position, with Villeneuve second, but Villeneuve made a mess of the start and ended up fourth, behind Hill, the Benetton of Jean Alesi and Michael Schumacher's Ferrari.

Taking advantage of the situation, Hill streaked off into the distance - by lap 15, he was 15 seconds ahead of Villeneuve, who was still stuck behind Schumacher.

But then came a piece of magic by Villeneuve, the sort of thing of which his father would have been proud.

Heading towards Estoril's banked 150mph, 180-degree final corner, Schumacher was briefly held up by the Minardi of Giovanni Lavaggi, and Villeneuve seized his chance to pull off a move never seen in F1 before.

It was a breathtaking manoeuvre, and Villeneuve seemed inspired by it. After the first of three pit stops, Villeneuve was 15 seconds behind Hill but, with the help of traffic, he had closed that to almost nothing by the time of their second stops.

Villeneuve sat behind his team-mate throughout the third stint, knowing he had the pace to pass Hill at the final stops, which he duly did.

I was in the news conference after the race and Villeneuve was still on a high from his pass of Schumacher.

"I told my engineers before the race that it was possible," Villeneuve said, "and they told me they'd come and pick me out of the wall if I tried."

Hill's face was a picture.