The Formula 1 world championship could hardly be going to a better place than Sao Paulo's Interlagos circuit for the penultimate race of one of the greatest title battles the sport has ever seen.

As if this season had not already generated enough thrills and spills, they are practically guaranteed at this autodrome built on a former swamp in a natural amphitheatre in one of the world's biggest metropolises.

Over the years, Interlagos's layout - of curling bends and long straights swooping up and down the gradients in this sultry city - has consistently produced races of the highest quality. And they stick in the memory all the more because of the electric atmosphere created by Brazil's enthusiastic fans.

There could hardly be a more fitting place for Fernando Alonso, Mark Webber, Lewis Hamilton, Sebastian Vettel and Jenson Button to resume their thrilling battle - as can be seen from our latest selection of classic races.

As ever, we will give you four choices of races from this track in the past and we're asking you to tell us by way of responses on this blog which is your favourite.

Informed by those responses, we will then pick one from which to show you in the run-up to the 2010 race next week the full 'Grand Prix' highlights programme broadcast on the BBC at the time - although this obviously will not be possible for races that fell when ITV held the rights, from 1997-2008.

All the races will get shorter, 10-minute highlights films, and we will also show the full hour-long highlights of the 2009 Brazilian GP, when Button clinched his crown.

So, to the races we have chosen.

The 1980 event was interesting on a number of levels, but it would worth watching even if it was boring, just to see the full greatness of the original Interlagos - particularly the long, banked, 180-degree first corner, more reminiscent of an American oval than an F1 track, and which only the very best and bravest could take flat out. You can still see this part of the old track if you go to Interlagos to this day.

The race marked the first career F1 victory for Renault's Rene Arnoux. But before the Frenchman moved into the lead it was full of drama.

Gilles Villeneuve, who had somehow qualified the unloved Ferrari 312T5 third, burst into the lead with one of his trademark lightning starts. Already in a place the car was unable to sustain, he was also soon in tyre trouble, and was passed by Renault's Jean-Pierre Jabouille and the Ligiers of Didier Pironi and Jacques Laffite on the second lap.

A skirt problem for Pironi left Jabouille in the lead chased by Laffite and Arnoux, but Laffite had an electrical problem after 14 laps and then Jabouille suffered a turbo failure at about half-distance and the race was Arnoux's. 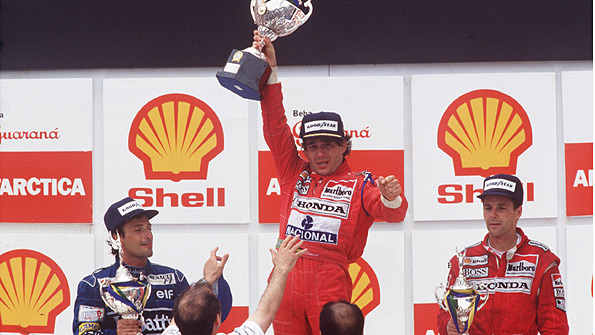 Winning in Brazil at last meant an enormous amount to Senna. Photo: Getty

Our next choice is the 1991 race, at the new Interlagos, and one of the late Ayrton Senna's greatest wins, and his first at his home race.

The Brazilian qualified his McLaren on pole, and spent the race holding off the faster Williams cars of Nigel Mansell and Riccardo Patrese. Mansell's challenge was ended by a broken gearbox with 10 laps to go.

Unknown to anyone outside McLaren, Senna had been in gearbox trouble for some time, having lost fourth gear. Mansell's retirement left Patrese in second place, and catching Senna rapidly.

With two laps to go, Senna also lost fifth and third gears, meaning he had to take most of the corners in sixth, nearly stalling several times. Complicating his task further, it was starting to rain, and Senna started gesticulating for officials to stop the race.

It ran full distance, though, and, utterly exhausted and in extreme pain, Senna had to be lifted out of his car

This victory is covered in depth in the new Senna movie, which will be released next year in the UK and which I am sure many of you have begun to hear about.

BBC F1 editor Mark Wilkin, pit-lane reporter Ted Kravitz and I were lucky enough to be invited to see it in the summer. I've been asked not to review it, but I can tell you that it is superb, and adds a revealing new dimension to this and many other aspects of the Senna story.

Our next choice is the 2003 race, one of the most remarkable grands prix in recent history.

It was held in the rain, with several storm fronts passing over the circuit in the course of the race.

A number of drivers were caught out, including Ferrari's Michael Schumacher, who was one of several - including Williams's Juan Pablo Montoya - who spun out at Turn Three, where a river running across the track turned a corner that is normally taken easily flat out into an ice rink.

Among the crashes was a huge one on the pit straight for Mark Webber, then driving for Jaguar, that also involved Renault's Fernando Alonso, who was lucky to survive after hitting the debris flat out at 180mph. 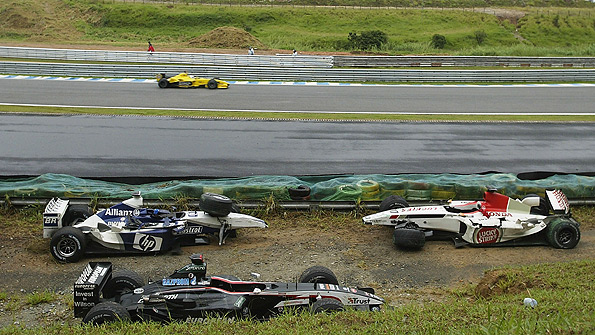 Fisichella follows the safety car through the crash debris at Interlagos in 2003. Photo: Getty

With debris strewn across the pit straight, officials waved the red flag, and the race was declared over, amid intense confusion about who had won, arising from a rule that dictated that a result was declared from two laps prior to when the signal to stop the race was given.

Race officials initially gave the win to McLaren's Kimi Raikkonen, with Jordan's Giancarlo Fisichella second from Alonso, even though Jordan were convinced their driver had won - on the basis that he took the lead on lap 54, and had just started his 56th lap when the red flag was shown.

Raikkonen took the trophy and it took a protest from Jordan, heard before the next race, the San Marino Grand Prix, to establish they were correct, and Raikkonen handed the trophy to Fisichella at an unofficial ceremony prior to that race at Imola.

Our final choice is the 2007 event, the final and deciding race of that year's title battle, which I would imagine needs no introduction to many of you.

Three drivers - McLaren's Lewis Hamilton and Alonso and Ferrari's Raikkonen - went into the race with a chance of the championship.

Raikkonen needed to win to have any chance of becoming champion, but even in that situation Hamilton had only to finish fifth to become not only the youngest champion in history but the only man ever to win the title in his first year in F1.

But the day started to go wrong for the Englishman from the very beginning. After qualifying second, he lost a place to Raikkonen at the start, and then another to Alonso at the third corner.

Determined to make amends, he tried to overtake Alonso around the outside of the fourth corner, Descida do Lago, and the inevitable happened - he slid off the track and rejoined in eighth place.

But that was not the end of it. A few laps later, the car stuttered with no drive coming out of that same corner, and it looked as if Hamilton was out of the race. After a frantic radio communication with his team, though, he managed to reset the computer on his car and get going, by which time he had lost 30 seconds and was down in 18th place.

Hamilton recovered to seventh place by the end, but matters were now out of his hands.

At the front, Ferrari's Felipe Massa led, from Raikkonen and Alonso - a state of affairs that would have made a McLaren driver champion, something that obviously Ferrari did not want.

Ferrari, therefore, engineered a change of positions at the final pit stops and Raikkonen went on to win the race - and the title by a single point from both Hamilton and Alonso, with the Englishman classified ahead of the Spaniard on results count-back.

Quite a selection, I hope you'll agree. I look forward to reading your views.