The latest edition of our classic grand prix series focuses on the Italian Grand Prix, the oldest race still on the Formula 1 calendar.

It was first held at the atmospheric Autodromo di Monza as long ago as 1922, making it the oldest track as well, and in that time it has hosted some of the sport's greatest races.

We have selected four from the event's relatively recent history and are asking you to select which one you would most like to watch here on the BBC Sport website and on the red button on interactive television.

We would like you to leave your views as responses on this blog and we will use them to inform our choice of which race to highlight next week to whet your appetite in the run-up to this year's Italian Grand Prix.

For the chosen race, we will broadcast the full 'Grand Prix' highlights programme that was shown on BBC television at the time, as well as the shorter highlights packages we cut for all the races.

We will also make available short and long versions of the highlights of last year's Italian Grand Prix, won by Brawn's Rubens Barrichello.

The first of our selections, 1987, featured one of the late, great Ayrton Senna's best - and most overlooked - drives.

In his last year at Lotus, Senna had taken two opportunistic wins at Monaco and Detroit, but his car, despite its unique active suspension, was no match for the flying Williams-Hondas of Nigel Mansell and Nelson Piquet. So in Italy, the Brazilian chose to gamble on trying to make it through the race on one set of tyres.

He took the lead as the drivers in front of him - Piquet, Mansell, Ferrari's Gerhard Berger, Benetton's Thierry Boutsen and McLaren's Alain Prost - made their mid-race tyre stops.

Senna had driven brilliantly to stay in touch with the leading group while also preserving his tyres as best he could in the first half of the race, and he appeared on course for a superb victory.

Then, seven laps from the finish he made a mistake while trying to lap the Ligier of Piercarlo Ghinzani and slid off into the gravel trap at Parabolica. By the time he rejoined, Piquet had slipped through into the lead. 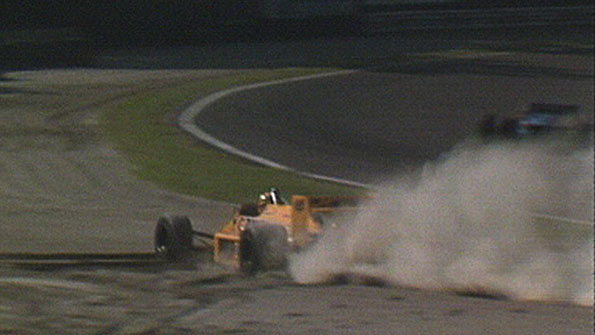 Piquet's Williams slips by into the lead as Senna runs through the Parabolica gravel. Photo: BBC

Senna gave chase, but his tyres - and for that matter his car - were not up to the job. He hung on bravely, though, and crossed the line less than two seconds behind his fellow Brazilian.

Our next choice is 1991, a race held against the backdrop of one of F1's great controversies - Benetton's poaching of Michael Schumacher one race after he had made his grand prix debut for Jordan, to whom he was under contract.

Mansell's Williams FW14 was a faster car than Senna's McLaren by this stage of the season and the Englishman was trying to close a points gap his rival had built up by winning the first four races of the season as Williams struggled with reliability problems.

Senna led from pole for the first half of the race, fending off the challenge of Mansell and Williams team-mate Riccardo Patrese. Mansell and Patrese, held up by Senna, were having their own battle too, and the Italian passed his team-mate for second place at the Ascari chicane on lap 26, only to spin off at the same place a lap later.

That left Mansell to challenge Senna alone, and he finally made it past with 19 laps to go. Senna pitted for new tyres, rejoining in fifth before working his way back up to finish second.

Schumacher finished fifth on debut for his new team, ahead of team-mate Piquet, whose F1 career he effectively ended by outpacing him for the rest of the season.

The next choice is 1996, when Damon Hill tossed away a chance to clinch his world title two races early.

That year, race officials had been forced to put piles of tyres on the kerbs at the apex of the chicanes after a worrying incident in practice when a block of concrete ripped up by one car that had strayed too far over the kerbs broke the front wing of the Williams driven by Jacques Villeneuve, Hill's team-mate and title rival.

The stacks of tyres were an inelegant solution to the problem - they were asking to be hit. And Hill did exactly that while leading the race on lap six, spinning and stalling his engine.

Fortunately for him, Villeneuve had already made the same mistake, bending his suspension and creating tyre problems that would mean he would fail to score points, so Hill still left Monza with a 13-point championship lead. But it took him until a nail-biting final race of the season in Suzuka to finally clinch the crown. 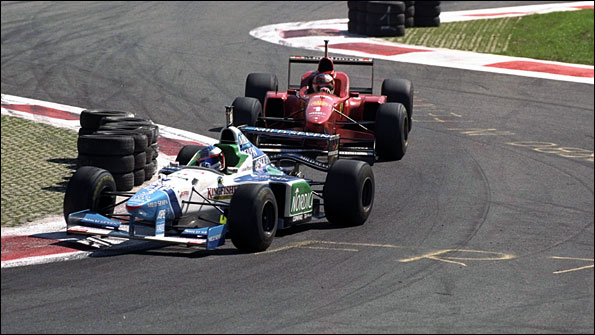 Hill's exit left Benetton's Jean Alesi in the lead from Schumacher, who was in his first season at Ferrari, then a far less competitive proposition than it became.

Schumacher was clearly faster, but could not pass the Benetton until eventually managing to do so during the pit-stop period. The German stopped two laps later than Alesi, set stunning times on his in and out laps, and emerged in the lead, after which he cruised to the flag.

It was the first Ferrari win at Monza since Berger's in 1988 and the place went predictably wild.

Finally, we have 1998, a race that brought the intense title battle between Schumacher and McLaren's Mika Hakkinen to a head.

Schumacher was on pole, with Hakkinen third on the grid, but a bad start left the Ferrari driver only fifth, although he quickly moved up to third behind Hakkinen and the Finn's McLaren team-mate David Coulthard by the end of the second lap.

The McLaren was generally the faster car in 1998, but at Monza things did not go smoothly for the team. Hakkinen began to run into brake problems, and Coulthard passed him for the lead on lap eight, whereupon Hakkinen began to fall into Schumacher's clutches.

Coulthard's engine failed on lap 17 - and the cloud of smoke it emitted unsighted both Hakkinen and Schumacher. In the confusion, Schumacher slipped ahead into a lead he was never to lose. Hakkinen soldiered on to finish fourth and he and Schumacher left Monza, with two races remaining, tied on points.

I know some of you would like to watch some of the great races from earlier in Monza's history - the closest ever F1 finish in 1971, for example. There are, sadly, some gaps in the archive that mean we do not have enough serviceable footage from many of these pre-1980 grands prix.

No matter, there's four super races to choose from. I look forward to reading your views.