As those who follow the sport closely know only too well, Formula 1 is a hotbed of rumours and gossip - some of which turns out to be true, some of which does not.

One of the many whispers that have been knocking around recently is that the future of the Japanese Grand Prix is not especially rosy.

The story is that its place on the calendar is vulnerable because of all the new races Bernie Ecclestone is determined to put on, and that it could drop off the schedule in the next couple of years, or perhaps alternate with the new race in South Korea.

Should these claims turn out to have any foundation, I would not be the only one to be concerned about an F1 calendar without Japan - many of the drivers in F1 would feel the same way.

That's because the Suzuka circuit is arguably the greatest in the world, right up there with Spa-Francorchamps and Monaco as a place that tests the best drivers on the planet to the absolute limit.

It is also rich in history - a small but dramatic sample of which features in the latest edition of our classic F1 series.

We have four absolutely cracking races for you to choose from this time. But before I go through the options, a quick reminder of the rules.

We select four great past races, and you - by way of responses on this blog - tell us which one is your favourite.

We use those views to inform our selection of the race for which we will show the full 'Grand Prix' highlights programme of the time, alongside the shorter highlights packages we cut for all the races.

The slight complication is that we can only show the 'Grand Prix' programme when there was one - so there is no longer highlights option when a race falls within the ITV era - from 1997-2008.

So, a quick run-down of what you're choosing from.

The infamous 1990 race was the second chapter of the notorious Senna-Prost story in Japan.

In 1989, Alain Prost won the title after a hugely contentious race, from which Ayrton Senna was controversially disqualified following a collision between the two McLaren team-mates.

In 1990, with Prost now driving for Ferrari, they were again disputing the title, and the situation going into the race was the exact opposite of the year before - if neither finished, this time it would be Senna who would be crowned champion, not Prost.

Senna was determined to take his revenge - a determination that was heightened when pole position was switched to, in Senna's view, the 'wrong' side of the track. 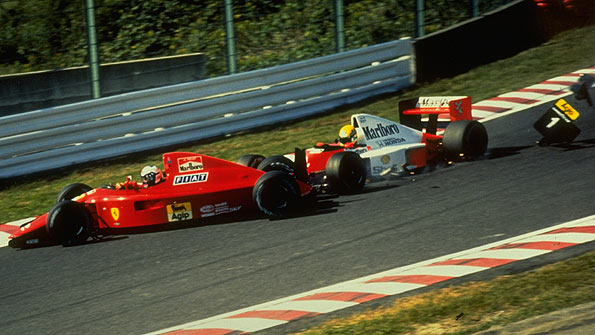 Senna takes arch-rival Prost out at the start of the 1990 Japanese Grand Prix. Photo: Getty Images

Unknown to observers, he had decided that if Prost, who qualified second, beat him away from the line, the Frenchman would not make it around the first corner.

And, sure enough, Senna ploughed straight into the back of Prost's Ferrari at 160mph at the entry to Turn One, taking both men out of the race.

In the wake of all that drama, few remember the race itself.

It should have been a straight battle between Senna and Prost's respective team-mates, Gerhard Berger and Nigel Mansell.

But Berger spun out of the lead on the second lap, leaving Mansell apparently cruising to an easy victory from the Benettons of Brazilians Nelson Piquet and Roberto Moreno.

This, though, was another of those races that added to the Mansell's reputation for losing out for any one of a number of bizarre reasons.

This time, an over-enthusiastic getaway from his tyre stop broke the Ferrari's driveshaft, and his race was run, leaving his arch-rival Piquet to lead home a Benetton one-two.

Our next choice is 1993, and one of Senna's many brilliant wet-weather victories. The race is not remembered for that, though, but for the explosive F1 debut of Eddie Irvine.

The Northern Irishman had become a Suzuka expert in three years' racing in Japanese Formula 3000, and he was drafted in by Jordan for the final two races of the season.

Irvine was the talk of the paddock even before the race. He qualified eighth, four places up on team-mate Rubens Barrichello, and his media interviews had already made it clear that he was a unique, irreverent personality.

In the race, his impressive performance on the track continued when he jumped up to fifth at the start. But it was what he did later on in the race, after it had started to rain, that really made his name.

Senna was battling for the lead with Prost, who had already been crowned world champion for Williams in his final season in F1.

When Senna came up to lap Irvine, the Jordan was embroiled in a battle with Prost's team-mate Damon Hill.

Initially, Irvine let Senna past, but when Senna then struggled to pass Hill, Irvine unlapped himself, greatly angering the Brazilian, and went on to try to overtake Hill.
Irvine failed, Senna lapped him again, and then finally went past Hill - but by this time he had lost 15 seconds to Prost.

Senna went on to win but he was still cross about Irvine's cheekiness after the race and - after a couple of drinks - his friend Berger wound him up that he should go and have a word with the disrespectful newcomer.

Senna went off to the Jordan offices to confront Irvine, but he did not find him as apologetic as he expected. Instead, Irvine answered back, and the two got into an argument - all taped by the journalist Adam Cooper, a close friend of Irvine, who happened to be with him at the time.

Irvine at one point even said Senna had not been going fast enough and eventually it all got too much for Senna, and the two men came to blows.

The next choice is the 1995 Japanese race and, for those who have witnessed Michael Schumacher's struggles this season, a timely reminder of his former greatness.

The great German had already clinched his second consecutive title for Benetton. And it had been a painful year for his rival, Hill. The Englishman had the faster car, but Schumacher - in Hill's words from an interview I did with him a couple of years ago - "ran rings around us".

Suzuka was one of many examples of that, the German romping to a brilliant victory in a wet-dry race as Hill and team-mate David Coulthard struggled in his wake.

Hill spun twice at the same corner, Spoon, the second terminally, and Coulthard also suffered an embarrassing retirement, losing control on gravel that came out of his sidepods as he braked for 130R, the corner after his own off-course excursion at Spoon.

Our final choice is 1998, the race at which McLaren's Mika Hakkinen clinched his first world title.

The Finn went into the race with a four-point lead over Schumacher, who qualified his Ferrari on pole just ahead of Hakkinen.

But the German stalled on the grid and had to start from the back, allowing Hakkinen to coast to an easy win. Schumacher kept interest alive by fighting brilliantly back to third place, only for his tyre to explode and force him into retirement.

So, a great selection, I hope you'll agree. I look forward to reading your thoughts.

Thanks for all your responses so far. This was always going to be a tough choice, wasn't it?

I have to let you all know of a slight change of plan. Our multimedia team have discovered that there is a technical problem with the tape of the 1998 race which means that we will not be able to offer the highlights for that one next week. It's a shame, I know, but it's unavoidable, I'm afraid.

So there'll just be the three races next week, plus the long and short highlights of last year's race. Normal service will be resumed in two weeks' time for the new South Korea race, for which we will offer a selection of great races from circuits no longer on the calendar. It's worth waiting for, I can assure you.