Singapore stages its third Grand Prix next weekend, and the event shows every sign of becoming established as one of the signature races in the Formula 1 calendar.

But its novelty raises problems for our classic F1 series - there are obviously not enough past Singapore races for us to ask you to make a selection of your four favourites.

So we are whetting your appetites for the next instalment in the 2010 season - destined to become a classic itself - with a choice of four great races from circuits that are no longer on the F1 calendar, but you will be able to get your Singapore fix by watching highlights of last year's race, too.

The races are four of the greatest in F1 history and, as ever, we would like you to tell us which is your favourite. We will use those views to inform our choice of which one to pick as our main selection next week - showing the full 'Grand Prix' highlights programme produced for BBC television at the time, as well as the shorter highlights package we cut for all the races.

The first is the 1979 Dutch Grand Prix, famous for Ferrari legend Gilles Villeneuve three-wheeling back to the pits after his left rear tyre exploded while he was leading. The speed the Canadian went on that lap ended his race; he not only parted company with his rear wheel but most of the suspension on that corner, too.

His antics divided opinion among observers between those who deplored what they saw as irresponsibility and those who admired Villeneuve's never-say-die approach.

Prior to that, he and Williams driver Alan Jones had staged one of their great duels.

Jones, second on the grid, passed the pole-position Renault of Rene Arnoux off the line but lost the lead to Villeneuve on lap 11. He held off the faster Williams until lap 47, when the tyre exploded, giving Jones an easy win. 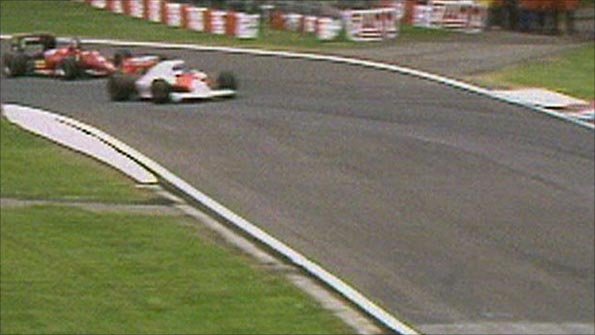 Prost takes the lead from the ailing Ferrari of Stefan Johansson at Imola in 1985. Photo: BBC

It is a race I have to admit to having a personal soft spot for - it was the one that first got me interested in F1.

Having returned from a childhood holiday with relatives in Canada, I turned on the television after arriving back from the airport to see Villeneuve's car racing around Zandvoort on three wheels. "Wow," I thought, "what is this brilliant sport, and who's that crazy man?" Some would say it was fate.

Anyway, on to the next race, the following year's French Grand Prix. There is no Villeneuve this time - the 1980 Ferrari was hopelessly uncompetitive - but Jones figures strongly again in his championship-winning year.

The race was a battle between the Australian and three French drivers all bidding for a famous home win - Jacques Laffite and Didier Pironi of Ligier and Arnoux, still with Renault.

Jones, who qualified only fourth behind Laffite, Arnoux and Pironi, was a hard-charging, old-school Aussie. He was determined to get one over the French on their home ground and drove a superb race.

Laffite stormed off into the lead at the start, ahead of the battling Arnoux and Pironi, with Jones holding a watching brief and looking after his tyres on full tanks on a typically scorching day at Paul Ricard in Provence.

After biding his time for a while, Jones began to make his move, closing on Pironi and passing him for third, before moving up to second a couple of laps later.

At this point, Laffite had a lead of eight seconds and looked reasonably comfortable, but the Frenchman began to run into tyre troubles, perhaps a consequence of his early pace, and Jones took a lead he was never to lose with 19 of the 54 laps to go. Pironi followed him through seven laps later to finalise the top three finishing positions.

Determined to rub in the French defeat, Jones took great pleasure in touring the track with a Union Flag on his slowing down lap.

Moving forward two years, we come to the 1982 Detroit Grand Prix and one of the great back-to-front drives of all time as McLaren's John Watson started the race in 17th place, but came through to win brilliantly.

It was a two-part race on the streets of Motor City, with a stoppage after seven laps following a collision between Roberto Guerrero, who qualified an impressive 11th for the low-budget Ensign team, and the Lotus of Elio de Angelis.

By that stage, Watson was already up to 13th, and his progress continued after the restart, as he found his car's Michelin tyres perfectly suited to the low-grip track.

Just as he would in winning from 22nd in Long Beach the following year, one of the drivers Watson passed on his way to the front was his team-mate Niki Lauda.

The Northern Irishman told me: "Niki was sitting in a queue, thinking it was impossible to overtake at Detroit, which was all concrete walls and right-angled corners. But when I passed him he realised it was possible and he woke up."

Unfortunately for Lauda, he was unable to match Watson's clinical progress through the field, and he came to grief in a bungled attempt to pass the Williams of Keke Rosberg for second place and ended up in the wall.

Rosberg faded towards the end of the race, and was passed by the Talbot Ligier of American Eddie Cheever and Pironi's Ferrari. Watson, meanwhile, was in a class of his own.

Finally, we have the remarkable 1985 San Marino Grand Prix, which I certainly remember as one of my favourites.

Although Ayrton Senna's Lotus led for much of the race, the McLarens of Lauda and Alain Prost, the Ferraris of Michele Alboreto and Stefan Johansson and Senna's team-mate De Angelis all remained in contention.

It was a remarkable race, with an even more remarkable ending, thanks to the combination of high fuel consumption at Imola and a limit on the amount of fuel the turbocharged cars of the time could carry.

After leading throughout, and looking set for a second consecutive win after his brilliant maiden F1 victory in the torrential rains of Portugal two weeks earlier, Senna's Lotus-Renault ran out of fuel with two laps to go, leaving Johansson out in front until he too ran out of fuel, handing the lead to Prost, with De Angelis second.

Although McLaren's TAG-Porsche engine was renowned as the best at fuel management, thanks to its clever electronics, the Frenchman was clearly in similar trouble as he crawled around the last lap.

He made it across the line, but stopped immediately afterwards, out of fuel. It was to cost him dear.

Without the fuel that would normally be left in the car, the McLaren was 2kg under nthe minimum limit when it was weighed after the race, and Prost was disqualified, making De Angelis the winner, for the second and final time of his career.

It is, I hope you will agree, a superb selection of races. I look forward to reading your comments.