Welcome to the latest edition of our 2010 classic grand prix series, which focuses on the Belgian Grand Prix.

We have selected four superb races from the event's history. Your role is to tell us by way of a response on this blog which one is your favourite and why. We will use those views to inform our decision about which one to highlight in the run-up to this year's Belgian Grand Prix on 29 August.

If that race is from the time when the BBC owned the rights to F1 (ie before 1997), we will show the full 'Grand Prix' highlights programme of the time as well as the shorter edit we will cut for all the races.

As some newer readers will almost certainly wonder why we have not included 1998 - with its 13-car first-lap pile-up, the controversial collision between Michael Schumacher and David Coulthard, and Damon Hill leading home a Jordan one-two - it's worth pointing out here that it was among our choices last year, the others being 1985, 1992, 1995 and 2008.

In 1979, the Belgian Grand Prix was still held at unloved Zolder, before its switch to the majestic Spa-Francorchamps track a few years later. 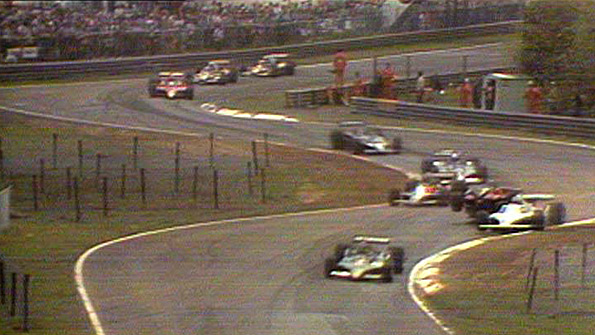 Villeneuve's Ferrari rides up into the air, sustaining damage that led to one of his great fightbacks. Photo: BBC

The race was one of three won by Ferrari's Jody Scheckter on his way to clinching the team's final drivers' title before the Michael Schumacher era. But it is remembered more for a stunning fightback by his team-mate Gilles Villeneuve.

Scheckter won after a race-long fight with the Williams of Alan Jones and the Ligiers of Jacques Laffite and Patrick Depailler.

First Depailler led, then Laffite, then Jones, then Depailler, then Laffite again, before finally Scheckter closed in on the Ligier and took a lead he was never to lose with 16 laps to go.

Villeneuve, meanwhile, had been forced to stop for a new front wing at the end of the second lap after becoming entangled in a collision between Scheckter and the second Williams of Clay Regazzoni.

That dropped the Canadian to last place, whereupon he began one of the greatest drives of his career. By the last lap, he was up into third place, only for his car to stutter and then grind to a halt, out of fuel. He was classified seventh. Had Villeneuve finished third, the points would have made him, not Scheckter, world champion that year.

By 1987, our next choice, Spa was firmly established as the Belgian Grand Prix's new home, having hosted the event in 1983, and then taking over permanently from Zolder in 1985. And like the 1979 event, this one is remembered for something other than the winner - this time an on- and off-track altercation between Nigel Mansell and Ayrton Senna.

Mansell looked set to dominate after taking pole position nearly 1.5 seconds clear of Williams team-mate Nelson Piquet. But after the first attempt to start the race was aborted following several accidents, the worst involving both Tyrrells at Eau Rouge, Mansell's hopes were ended on the first lap of the re-started race.

Beaten away by Senna's Lotus from third place on the grid, Mansell tried to overtake the Brazilian around the outside out the back of the circuit. The two tangled, Senna retired on the spot and Mansell limped around to the pits for repairs, eventually retiring on lap 17 as a result of damage sustained in the accident with Senna.

Still furious, the Englishman then marched down to the Lotus pit to confront Senna. Angry words were exchanged and punches thrown - Mansell even grabbed Senna by the throat before the two were separated.

Out on the track, Alain Prost won the race for McLaren to take his 27th F1 victory, equalling what was then Jackie Stewart's record of F1 career wins. The Frenchman went on to break the mark in Portugal later that year, before leaving it at 51 when he retired at the end of 1993. Since then, Schumacher has raised the number to 91.

Our following choice, 1993, should probably have been Prost's 52nd victory, but instead the race was number two for his team-mate Damon Hill.

Prost dominated from pole position until his second pit stop, when a mix-up with his team and then traffic when he rejoined dropped him behind Hill and the Benetton of Schumacher. Prost set the fastest lap as he chased Schumacher, who was himself chasing Hill, but the order stayed that way to the flag. 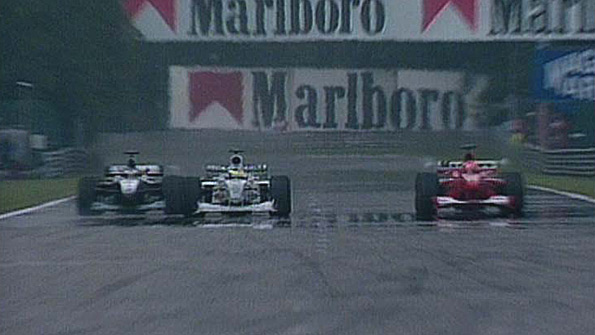 Hakkinen (left) passes Schumacher in one of the great overtaking moves of all time. Photo: BBC

Finally, we have 2000, a race made famous by McLaren driver Mika Hakkinen pulling off one of the greatest overtaking manoeuvres in F1 history.

As so often that season, the race devolved into a battle between the Finn and Schumacher, who were fighting each other for the title.

Hakkinen dominated in the wet early stages, but as the track dried McLaren delayed brining him in for dry tyres and Schumacher was able to close up, the German taking the lead when Hakkinen spun on a patch of standing water.

Clearly much faster, Hakkinen then began to close on the Ferrari and with four laps to go he had a run on him out of Eau Rouge and up the Kemmel straight towards the chicane at Les Combes.

As the two accelerated close to 200mph and Hakkinen went for the inside, Schumacher moved across on him with typical ruthlessness and, wheel-to-wheel, the two cars nearly touched.

Disturbed, but determined, Hakkinen was in position again a lap later, but as the two cars pounded up the straight a backmarker - Ricardo Zonta's BAR - was in the middle of the track and it looked like Hakkinen would have to back off.

Schumacher, in the lead with Hakkinen right behind him, had to choose which way to go around the Brazilian, and he went for the outside, the racing line, probably expecting Hakkinen to follow him. Instead, the Finn saw a gap on the inside and dived into it, creating a spectacular sight as the two leaders zapped either side of the backmarker.

Schumacher initially moved to block the McLaren but realised it was too late. Hakkinen claimed the corner, and the race was his.

The drama was not finished, however. As they climbed from their cars in parc ferme, Hakkinen went over to Schumacher and, with his hands mimicking the positions of their cars on lap 40, made it abundantly clear in measured tones how unhappy he was with Schumacher's driving.

After that, both men declined to discuss the incident in public.

So there you have it - a great selection, I hope you'll agree. I look forward to reading your views. The videos will be published in the week preceding the Belgian Grand Prix.